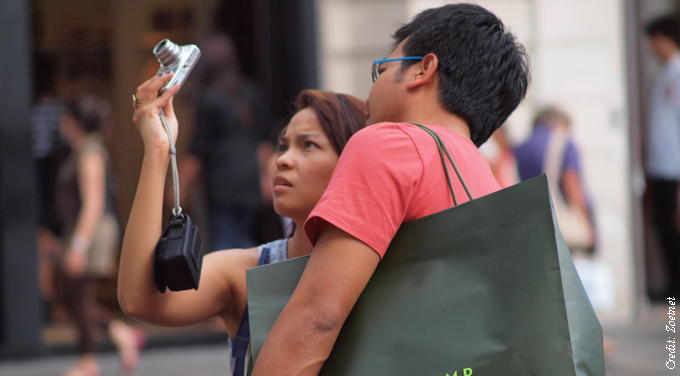 Chinese tourists need to look outside the shop window

Visitors from China are certainly making waves around the world. Much of the attention has focused on their wallets, and what it means for shops, hotels and airlines everywhere.

From that perspective, the prospect that the number of outbound Chinese could more than double by 2020 is mouthwatering. But it also has implications that potentially reverberate much further. In less than a decade, Chinese might have adopted new and significant views of their Asian neighbors, protecting the environment and how they behave in public at home.

According to CLSA, a brokerage, 200 million Chinese could be jumping on flights by 2020, up from around 80 million in 2012 and far higher than the 100 million seen by the UN World Tourism Organisation in what until recently has been considered the benchmark estimate.

This sudden acceleration in tourist numbers is being spurred by, among other things, rising wages, more holiday leave, relaxed visa restrictions and overcrowding in the domestic holiday market, CLSA said in a report issued last week. Far fewer Chinese as a share of the population currently go abroad than in Japan, South Korea and Taiwan, their main peer group.

Their travel spending is forecast to more than triple to around US$4.13 billion (RMB 25 billion) by 2020. This has huge implications for global retail, starting with the most popular pursuits of gambling and shopping but increasingly moving into things like health tourism.

Chinese who have been overseas two or three times are becoming more sophisticated and realizing that travel is less about shopping and more about observing. Like their Japanese counterparts who started visiting the world for the first time en masse in the 1980s, they have hit this learning curve head on. First, they came in packs, charging into shopping malls and crowding out scenic spots. Now, slowly, they are taking the time to look around closely.

“These tourists are less likely to travel in big groups and may not be on the ‘shopping-frenzy’ that first-time tourists tend to display,” Renee Hartmann, an expert in Chinese consumer trends, noted in an article for industry portal Jing Daily last year.

One of the most valued aspects of tourism for Westerners is the sense of relaxation that typically occurs on holiday. This can lead to more productive workers and happier, enlightened citizens. China could do with a bit of both as it continues to undergo seismic social changes.

The Chinese government, under a strategic tourism plan launched in 2013, is encouraging more locals to take holidays by reinforcing existing regulations covering paid leave. The stated aim is to boost consumption at home, but it could also allow more Chinese to develop a sense of personal adventure and plan vacations for themselves and avoid the huge crowds that amass during public holidays – the only travel period for much of the population.

Last year, the government issued a much publicized guidebook telling tourists from China how to behave when overseas. Respect for their surroundings could be one of the first changes. “Given that there are some issues in China in terms of pollution… we think that experiencing the nice environment when people travel overseas will change peoples’ habits when they return home,” Aaron Fischer, lead consumer analyst at CLSA, said at a media briefing in Hong Kong.

There is even scope for improved diplomatic ties in this part of the world, which is at its most sensitive for some time. China is in heated disputes with Japan, South Korea and several Southeast Asian states about maritime borders.

Many Chinese are hostile to their neighbors, often through lack of understanding or interaction. As more visit these countries, they might start to drop their aggressive perceptions, which would undermine public support for the aggressive stance Beijing has adopted on the issues. The Communist Party, despite its total grip on political power, is sensitive to public sentiment.

How likely is any of the above? The prospects are not too far-fetched. Experiences in countries like Japan and the United States show that tourism, eventually, can lead to a better understanding of the world. Nevertheless, this can only start to happen when tourists gaze outside of the shop window and observe daily life in the places they are visiting.

That probably won’t happen in a big way for some time. As Fischer noted, “So they [Chinese tourists] might say that they go overseas to experience different cultures, [but] when it comes down to it, it’s really all about shopping.”