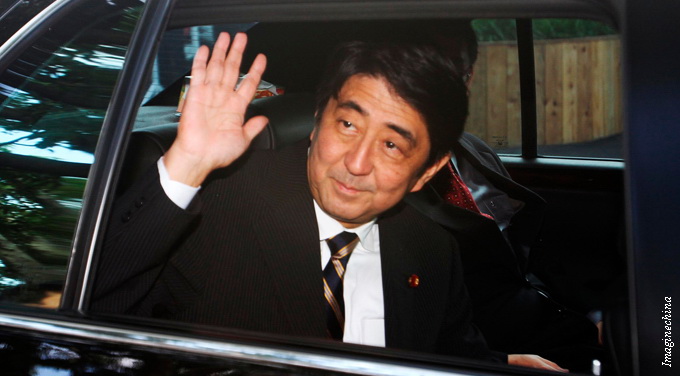 Abenomics sets Japan on a crash course with China

Chinese officials must have let out a loud grunt when Japanese Prime Minister Shinzo Abe took a clean majority of the seats in the upper house of parliament in late July.

The win for the Liberal Democratic Party signaled the end of more than seven years of turbulent and short-lived leadership in Japan. It has also cleared the path on which Abe will pursue his economic and military policies, known as Abenomics.

It is hoped that this newfound political unity will slowly lift Japan from a decades-long trough. Thus far, Abe’s signature economic move has been to weaken the yen, therefore lowering the price of the country’s exports. At home, businesses have rallied around the plan on the prospect of Japanese products becoming more competitive in foreign markets.

Abe also likes guns. Last week, the Japanese military unveiled Izumo, the biggest battleship in its armada since World War II and named after a vessel from Japan’s imperial-era navy. The country is expected to continue to boost its military presence in the region and possibly even revise the pacifist constitution it agreed to after its defeat in 1945.

Taking all this into account, it should be no surprise that a strong Japan spooks China.

Since 2006, when Prime Minister Junichiro Koizumi stepped down and Abe began his first, ill-fated term, politics in Japan have been in turmoil. Abe’s first stint in office lasted less than a year, and following his resignation five people filtered through the PM’s office in five years. Abe once again took up the mantle in December.

That period of time also witnessed Abe’s party temporarily lose majority power to the Democratic Party of Japan, as well as an earthquake and tsunami in 2011 that did widespread damage and ignited a nuclear crisis at a reactor in Fukushima on the country’s northeast coast.

China no doubt benefited from Japan’s discord during those years. The island nation could hardly form a cohesive plan for reviving its economy, let alone muster up a robust response to China’s growing assertiveness on a range of topics such as the territorial dispute in the East China Sea.

Now Japan looks far more organized on the international stage. If China’s President Xi Jinping meets Abe in the near future, as was rumored late last month, he will deal with a leader emboldened by popular support, not mired in political struggle.

Monetary easing under Abenomics has notably irked China. Japan began actively devaluing the yen late last year and has promised to continue. As the yuan strengthens against the yen, Japan will import less and less from China at a time when mainland exports are already sagging.

The devaluation scheme has tapered imports from across the East China Sea. Chinese exports to Japan slowed by 2% year-on-year in July, the sixth straight month of falling shipments. During that time, the yen fell by more than 21% against the yuan.

The currency tussle is the least of China’s worries, however.

Of greater concern is popular support for Abe’s military ambitions. With the backing of two smaller right-wing parties, the Liberal Democratic Party could potentially hold the two-thirds majority in the upper house needed to make changes to the constitution.

Japan already has a powerful and technologically advanced military, which it calls a “defense force.” Abe wants to call this an army, something that is prohibited by the current constitution. While the technical change in wording may not seem substantial, the move is at least partially – if not mainly – directed at an increasingly aggressive China.

Beijing can be sure that a revamp of Japan’s military will not lead to a concession over the Diaoyu islands, a small archipelago in the East China Sea that both country’s claim. Tensions over the five uninhabited islands and three barren rocks, which Japan calls the Senkakus, have raged since the early 1970s but during the past 12 months have looked worryingly like a flashpoint for conflict.

If China thought Japan headstrong during its politically fragmented years, unity under Abe should prove perturbing on the issue of the Diaoyus. Expect little progress and increased risk in the East China Seas if the Liberal Democratic Party can hold on to popular support.