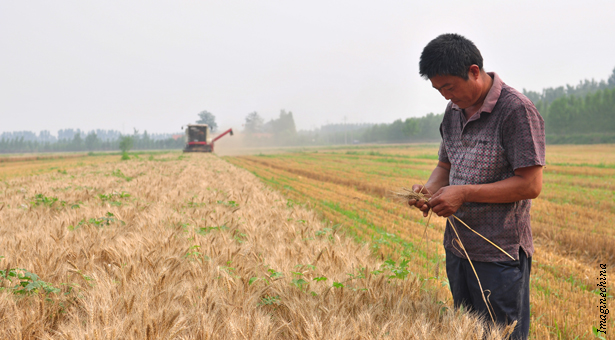 In the northwestern Chinese town of Wuliming, farms are being consolidated into a vast tract, the likes of which haven’t been seen since collective farms under Mao Zedong.

But the plots aren’t being combined under the directives of commune leaders as they were in the late 1950s. Farmers won’t be eating gruel in communal dining halls. And there will be little need for them to sweep across the fields en masse turning up soil or harvesting crop.

Rather, most farmers will leave their plots behind as they are subsumed by large factory farms. Giant tractors will take their place. Those that stay will answer to a combination of investors, banks, local government and private corporations.

Wuliming, in Heilongjiang province, is home to one of the country’s first and largest factory farms. With the central government behind it, one farm in the town has swallowed up household farming plots, growing from about 460 hectares to nearly 1,420 hectares, larger than 600 American football fields, in less than four years.

Heilongjiang is at the heart of an ongoing series of experiments that are super-sizing farms with money from banks and private corporations. Substantial reforms started in the province in 2011, but guidelines issued by the state council in April brought the pieces of a somewhat scattered experiment together.

It’s no mistake that the consolidation of land has been gradual and piecemeal. The government is wary – even divided – over how to proceed on agriculture reform because of its close connection with land-use rights, urbanization and ultimately social stability.

If successful, industrial farming can produce higher yields with less manpower, allowing a stream of laborers to enter the city and participate in the urban economy. Most developed countries took these steps long ago.

But there are also worries – and convincing examples – about how big farm production pushes people off the land with few places to turn besides city slums.

The reforms – connecting farms with banks, for example – aren’t revolutionary when considered piece by piece. But assembling them together, as was done in April, should make it easier to duplicate the experiment in Wuliming.

“The components have been there for many years. But the new test is trying to put them all in the same place to try to see how they work,” said Huang Jikun, director at the Center for Chinese Agricultural Policy at the Chinese Academy of Sciences.

April’s policy move encourages farmers to turn over land to organizations and promotes corporate investment in that land. It also supported technology upgrades, heavier government investment, training at local universities and distribution and procurement of produce – all on one giant plot of land.

Reform in Wuliming represents just a small step in shifting land policy during the last 100 years when the status of land has changed drastically and often rapidly beneath the plows of China’s farmers.

Titles to the land still can’t be bought or sold, a relic of communism, but farmers can lease them out. The Wuliming organization that is consolidating the land, which goes by the same name as the town, offers just under US$100 to farmers for about 0.07 hectares of land, Yu Dayong, the town’s deputy party secretary, told China Economic Review. (Farms are often roughly 0.7 hectares, or 10 mu under the Chinese measurement system.) The titles to the land are handed over to the organization until 2027.

The biggest challenge for building big farms like Wuliming is finding the money to do it, said Cheng Enjiang, adjunct professor of agricultural economics at Zhengjiang University.

“They need a lot of investment. They need to spend lots of money on irrigation, big machines, the costs of consolidation. And they need to compensate farmers too,” he said.

Farmers, most of whom have worked the fields their entire lives, can become shareholders in the collective and get returns on harvests. Wuliming’s collective farm project is 60% owned by the local government and 40% owned by investors in the organization, which can include farmers, companies or other private investors. Provincial commercial bank Longjiang Bank and the state-owned cereal company COFCO provide mortgages to the organization.

Funding for farms via corporations has been a point of contention in Beijing. Reformers have pushed for more privately backed financing for farms, arguing that the introduction of free market principles will be the only force that can fully modernize the sector.

For many politician, injecting private money into the country’s food source is a dangerous idea, one that could lead to landlessness and social unrest. Older policymakers in Beijing no doubt fear the landlordism that plagued China prior to the communist takeover, arguing the push for modernization is shortsighted.

Indeed, there is more to boosting the size and efficiency of a farm than just deep pockets and huge tractors. When farmers leave the land, they need jobs, houses and welfare benefits such as medical care and schooling for their children.

Wuliming has succeeded in securing local jobs for most farmers that leave the land, said Yu, the town official. Although some leave for bigger cities, many stay to become managers on the farm or to find employment in a local industrial park.

Residents in Wuliming sound well taken care of, according to their leader. That could be because there are simply not many residents in the province.

For every person in the province there are 13 hectares of arable land. Compare that to a province such as Henan in China’s Central Plain where each person has only 1.21 hectares to trowel.

Building bigger farms in China’s more congested heartland could push too many farmers away from the only form of subsistence they know.

“To increase farm size, you have to create lots of employment in the urban areas. If you do it overnight, people will be sleeping on the streets,” said Huang at the Chinese Academy of Sciences.

The case study of Brazil

History has shown the consequences of blind industrialization of farmland without the proper urban infrastructure. Brazil is a case study for how not to industrialize farms, and one to which China has certainly paid atte
ntion.

Brazilians left the farm in droves during the 1960s and 1970s as farming corporations and speculators took over smaller plots of land with the support of small banks. People poured into urban areas looking for work, often to no avail and without a safety net of government services.

The transition greatly boosted the productivity of Brazil’s agriculture sector, but the social impact on the countryside and cities was severe and lasting.

The favelas, or crime-ridden slums that cover the hillsides of Rio de Janeiro, are in part a testament to an ill-planned agricultural reform.

“There weren’t any jobs in the countryside. So people moved to the cities,” Michael Spence, a Nobel laureate in economics and New York University professor, said of Brazil’s transformation. Spence spoke with China Economic Review in late June.

As it pushes along with agricultural reforms, the Chinese government is trying to avoid conditions such as the ones that have plagued Brazil for decades.

Industrializing farms is a factor that pushes farmers toward the cities, Spence said. But much of the work China will need to do is in the cities, “pulling” rural dwellers toward new opportunities. By creating conditions in cities that are favorable to farmers, such as stable jobs and social welfare, they will be attracted to life in the city, rather than forced into it.

The process is a delicate one that “will take a long time,” said Huang at the Chinese Academy of Science. The pace of development in the city must match that in the countryside. For now, China will err on the side of caution, opting for slower development and dodging the risk of dangerous shantytowns.