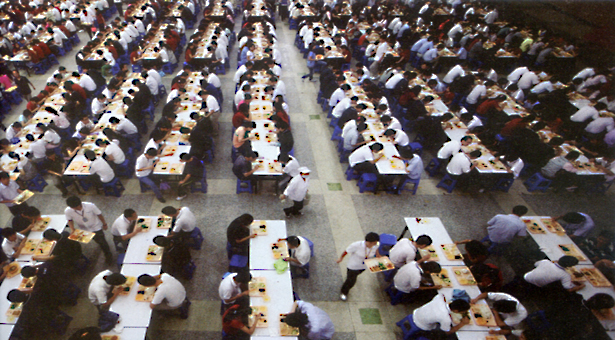 China’s steady flow of labor supply is drying up. According to a report released this year by the Institute of Population and Labor Economics at the Chinese Academy of Social Sciences, China’s working age population will peak around 2015 and then decline almost 20% by 2050.

As their numbers have dwindled, workers have demanded better compensation, leading to rising labor costs for manufacturers – many of whom already operate on razor-thin margins. Employees are also demanding better conditions, a theme highlighted by US and European media investigations of working conditions at Foxconn, a large supplier of Apple products. CHINA ECONOMIC REVIEW spoke with factory workers and managers from across China to find out how the situation is changing.

I work 10 hours a day and have been working at Xtep for over six months. It was worse at my last job, where I worked 14 hours a day. I earn RMB1,500 (US$238) per month as a base salary, since I hit the quota of gumming 3,000 pairs of shoes per day last year. Normally, no one is supposed to work more than 10 hours a day, but if workers don’t finish their daily quota then they stay on to finish. The company pays unskilled workers commission of RMB0.026-0.055 on each pair of shoes, while skilled workers earn RMB0.1/pair. We get a bonus of RMB10/month if we don’t ask for any kind of leave, including sick leave. So my total salary turns out to RMB1,600-2,100 (US$253-333) per month. I was promoted from unskilled worker to skilled worker this year, but I don’t feel like it’s anything special – we’re just workers. The company does not pay for our social insurance, but nobody I know really cares about that. I’ve heard other factories don’t pay it either. We signed two copies of our contracts when we came to work here, but both are in the hands of the company. My job in the factory is pretty safe, but there are some others that are not. Last year a worker was injured by the machine. He reported his injury to headquarters, but the company didn’t pay him anything, not even a salary when he was on leave.

I came to Shenzhen with my classmates just to see something different. My friend introduced me this job making electric products. I work 11 hours a day but I get to rest on the weekend. I’ve only worked here for around 20 days, so my base salary is just RMB1,800/month (US$285). But I think I can earn RMB3,000/month (US$475), since the total is based on the number of pieces I make. The company provides social insurance but I don’t quite understand it – I think I’ll receive it after my probation period is over. I’m currently learning computer graphics at work. If I master that, I’d like to get a job in the electric field as an engineer. I’m not afraid of going anywhere, but one day I want to return to my hometown in Fujian province. My first priority is to work hard, learn and get promoted. I think it is easy to find a job. There are jobs everywhere, depending on your requirements.

A 28 year-old female senior worker at a Foxconn plant in Kunshan, Jiangsu province:

I’ve been working at the company for about four years. The junior workers are mostly graduates of secondary school, high school or vocational school, but there are also lots of university graduates because Foxconn signs employment agreements with universities in central and western China. It doesn’t seem like China’s labor shortage is a big deal for Foxconn. The company offers an entry-level salary for new workers of RMB1,530 (US$242) during a six-month probation period, then the salary rises to RMB1,730 (US$274). The company also provides RMB100-300 (US$16-48) per month for accommodation and RMB11 (US$1.74) per day for lunch remuneration. But since last year, these fees were transferred to the basic salary, and there was a 30% overall salary increase. That was good because the overtime work pay is based on a ratio fixed to salary, so it can be more lucrative. The company buys insurance for us. Our work week is set at 60 hours, but working overtime is fairly common in the manufacturing industry. However, our company’s production was very sluggish at last year’s peak season due to decreased orders. If you are happy to work here making this amount of money, you can stay. But if you are not, the company will do nothing to keep you here.

I’ve been working at this company since July 2011; my job is to repair auto kits and parts, such as doors and plates. My base salary is RMB1,700/month (US$260) – including free lunch and accommodation – and I am paid 13 months per year, but without social insurance. Honestly, none of us complain because we don’t want to pay the premiums from our low salaries. Officially, I work 8 hours a day. But I work around 30-40 hours of overtime per month. Our overtime pay is RMB13 (US$2.06) per hour for weekdays and RMB135 (US$21.38) a day for weekends. I love working overtime because I can earn more money. The managers at my company are all Taiwanese, and it’s hard for local staff to be promoted to a high position – the best-case scenario here is to be promoted as a unit manager in charge of 10 people. The good thing is that promotions are based on merit instead of tenure, so I may actually have a good chance to be promoted, even though I’m young. Most manufacturers face recruitment problems after the Spring Festival, but the vacancies are filled pretty soon. I think being a worker is just a way to survive; I want to run a small business in the future. Most of my colleagues have a similar mindset.

The majority of workers at our factory have very little education. The work is not difficult, so there’s no need to pay high salaries to recruit well-educated workers. The company provides around one month of training for each new worker. Most workers are in their 30s and 40s and have been working here for over 20 years. The average monthly salary is RMB2,500-3,000 (US$396-475), including social insurance, and the average work week is 40 hours. The working environment is unavoidably unhealthy, as chemical factories always have some pollution. But we hire cleaners to clean the factory every day and the factory is also installed with fire-fighting and disinfection equipment. It is difficult to find workers during the harvest time, because many migrants are from the countryside and return to farming. Worker turnover is okay, and we always have enough manpower to hit production quotas. But honestly, I do feel the pressure of rising labor costs due to inflation.