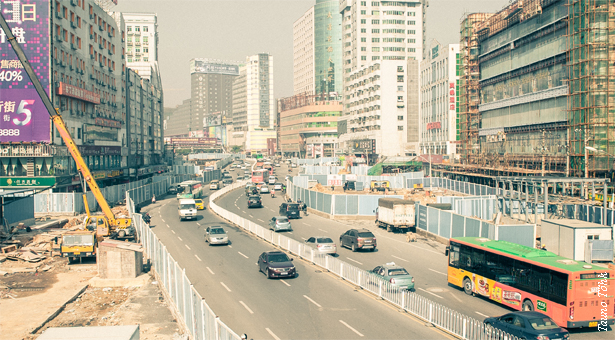 Credit can be like steroids for developing countries. Pump loans to businesses and governments, and they will be better able to tap into the latent opportunities of an undeveloped economy.

But as Francis Cheung, head of China and Hong Kong strategy at brokerage CLSA, points out, China has become addicted to debt to fuel growth. And like habitual steroid use, eventually growing debt will threaten the health of the overall system.

Cheung authored a report earlier this month sounding the alarm on how the levels of debt are piling up with no sign of slowing while bringing fewer benefits to the economy. More than half of China’s total debt was added in the past four years, the bulk of which came from shadow banking and bonds. The country’s debt level sits at roughly 205% of GDP as of 2012.

On the sidelines of the CLSA China Forum 2013 in Beijing earlier this week, Cheung spoke to CHINA ECONOMIC REVIEW about where the biggest risks lie and their possible solutions, even if it’s unlikely they’ll be enacted

China’s debt problems have been growing for some time but, particularly this year, they have been the subject of more scrutiny. Why do you think that is?

For me, it’s pretty straightforward. China had a big stimulus in 2009, I understand that. We had a lot of debt, I undertand that. But since 2009, we just kept on adding more debt. In the first quarter, social financing increased 58% year-on-year. I just didn’t get it. And the [GDP] growth wasn’t growing. So for investors who are shrewder, they’re saying, “Hey, we’re adding more debt but we aren’t seeing more growth. What’s happening here?” For the more widely read public, they’re saying, “Hey, there’s been some big downgrades on China’s debt from Moody’s and Fitch” because the debt is higher than they anticipated.

The world is a strange place now: Adding debt is not a bad thing. Printing money is not a bad thing. Can you keep it going? Yeah, you can print money now. So you can keep it going. In fact, China is not printing money, all this hot money is coming into the country. It is the one place not printing money.  China isn’t a rich country. At 250% [debt to GDP ratio], you’re actually pushing US kind of levels. I see it as a big anchor [weighing down the country].

I did an analysis that said local government debt was serviceable. But because you have spent a lot of money servicing this debt, that’s already a half-a-percent drag on your GDP growth. The more debt you have, the more drag to your GDP growth because more money is going to service the debt. And that’s why I say the debt is a drag.

Also, if the debt was really productive, I don’t think it would be climbing that fast. I think you’d have a higher growth rate instead of a declining growth rate … It’s only going to get worse. I don’t see marginal efficiency of debt getting better.

What does the middle income trap really tell you? You can’t compete at the low end because your wages are too high, but you can’t compete at the high end because you don’t have the R&D … China needs to be more innovative than anyone else to move out of the middle income trap … China has to become more productive. Productivity has decreased, that’s why the debt is increasing. So we need to reverse that somehow.

You’re saying that amount spent on servicing higher debt could be spent on encouraging industries based on consumption, for example?

Yes. Health care, pensions. You can invest in consumption, build a social safety net. In the investment[-driven growth model] angle, I’m not really sure what’s left because even the strategic industries are all overcapacity.

What likely needs to happen is let the private sector have more places to invest, then they can borrow the money and use it more productively. This will make the [state-owned enterprises] take a big hit, which is dangerous because SOEs aren’t very competitive to begin with, then you can actually have increased productivity. There’s just no magic solution here. This is from research we’ve done a while ago: No country has become rich by growing SOEs. Countries become rich because they have a dynamic private sector.

There’s a section of the presentation about how sustainable the debt is, where I review everything … The worst [debt holders] I found were the SOEs because their return on equity was 5% with an 115% debt to equity ratio. If I were a bank, I wouldn’t be lending to these guys. It isn’t the absolute [amount of debt] I’m worried about, it’s the trend. The State-owned Assets Supervision and Administration Commission (SASAC, China’s regulator of SOEs) is quite worried about this, earlier they said they wanted the SOEs to raise profit growth by about 10%. I’m not sure how they can do that. The only way they can do that is if they cut expenses further … You shouldn’t be giving debt to companies that only generate a return on equity of 5%.

Local government debt is such a problem, in part, because they have few means of raising money. What could be done to generate revenue so they don’t have to take out more debt and can pay for their existing debt? Property tax maybe?

The property tax for some reason has been very disappointing … It’s not that mechanically hard to do. People say it is, but I question that. But you can always find a way around that by saying that all new transactions are subject to property tax and grandfather in the old ones. But obviously there’s a lot of vested interests [that oppose it]. Especially in Beijing here, we should have been one of the first places to have it but don’t have it. There’s too many vested interest here.

One of the things that is holding back all the reforms like social housing, hukou reform, is local government finances. Someone has to pay for it. It’s very logical to try to get it from property tax. In fact it’s perhaps the most logical place to get it. You’ve seen governments around the world collect property tax. Until you get local government finance fixed, you’re not going to do the reforms you need to do.

So this needs to happen but from the sound of it you’re not that hopeful it will happen?

I don’t really see a lot of momentum behind it. I predict it will not happen.

Do you have any o
ther expectations or predictions for the long term?

Going from 200% to 250% [of debt to GDP] should be a wakeup call. I don’t think it’s an aggressive estimate. I’m not out there to scare people. I just think it’s a realistic number.