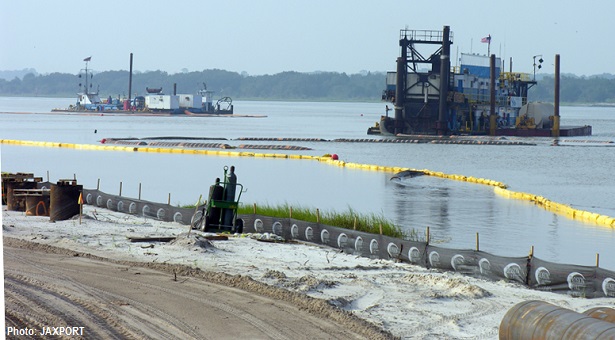 Long haul carriers from China brimming with electronics and clothing dropped anchor in the Pacific a few miles off the Port of Los Angeles waiting days, even weeks, for a spot to dock. On shore, China-bound citrus, dairy products, and meat overflowed refrigerated warehouses and spoiled in the California heat with no labor or equipment to move it. The labor strikes, equipment shortages, and crippling bottlenecks that ravaged major West Coast ports for months from July 2014 to March 2015 compelled Asian companies to seek alternatives.

Take Jacksonville, Florida, a sprawling new South netherworld between Miami and Atlanta best known for hosting the Super Bowl in the mid-2000s. Until recent years, Jacksonville’s shipping and logistics center, Jaxport, was a regional stopover with short-distance links to South and Central America and Puerto Rico. Things changed in 2009, when Jaxport partnered with Trapac—a subsidiary of parent company MOL, a Japan-based company boasting the world’s largest shipping fleet—to open a new terminal, prompting trade with the Asia-Pacific region, particularly China, to skyrocket.

The ascendancy of Jacksonville and other smaller Southeastern ports, such as PortMiami, and Wilmington, North Carolina, was not without rough patches. Dennis Kelly, Regional Vice President and General Manager of Trapac Jacksonville, described early growing pains from poor timing (the start of a recession) and continued competition from more seasoned southeastern ports in Savannah, Georgia and Charleston, South Carolina as an “uphill battle”. But Jaxport has consistently outpaced its more established counterparts in Asia container traffic, posting an impressive 18.4% year-on-year growth rate since its opening, albeit from a much lower baseline.

Jaxport Executive Vice President and Chief Commercial Officer Roy Schleicher calls the increased trade with China “extremely encouraging,” adding that Chinese imports and exports over the past 5 years more than doubled, from 53,000 containers in 2009-2010 to 110,800 in FY2015. Starting from a zero baseline in 2009, China trade now makes up 15% of Jaxport’s international container traffic.

China and the American Southeast have plenty to offer each other. Kelly told CER that China “brings in anything and everything,” from furniture and fixtures to tires, consumer electronics, leather purses and frozen seafood. In return, US ports ship out metals, wood pulp and paper products, oranges, base metals, cotton and textiles for Chinese consumption.

Though Jaxport currently only plays host to one mainland Chinese ocean carrier (China Shipping), two Taiwanese carriers (Yang Ming and Evergreen) and one Hong Kong based carrier (OOCL), recent efforts have been made to increase the volume of China-Jaxport trade flow through multinational carriers. In May 2013, the G6 Alliance (Hapag-Lloyd, NYK, OOCL, APL, Hyundai, and MOL) launched, expanding trans-Pacific trade services and incorporating two routes with stops in Jacksonville. In July 2015, Maersk-MSC, the largest container shipping line in the world, signed a new agreement with Jaxport to start a weekly direct service between Jacksonville and some of the largest ports in China: Tianjin-Xingang, Qingdao, and Shanghai. In February 2016, CMA-CGM upgraded its Pacific Express (PEX3) service with a new rotation linking Jacksonville, Miami, and Charleston with Chiwan, Shanghai, and Ningbo.

July 2014 to March 2015 marked the peak of the shipping shake-out that clogged the West Coast with queuing vessels. Kelly called the combination of huge port backups, road-rail congestion, labor strife and equipment shortages “the perfect storm.”

“Big importers in China had their supply chains completely disrupted, creating a bottleneck,” Kelly said. “Instead of Los Angeles and Long Beach, it was suddenly easier and cheaper to shift business to the East Coast.” Companies had begun looking to consolidate supply as the Chinese economy slowed, and East Coast ocean freight routes had low prices on their side. Sure enough, smaller Southeastern ports’ Asia trade saw a huge jump, encouraged by cargo diversions from the traditional West Coast hubs for freight inbound from the Asia Pacific region.

American Shipper reported that during the peak of the West Coast deadlock, several Southeastern ports saw double-digit cargo volume growth, while Western ports logged volume declines of 10 to 30%. Things have evened out in the year since the deadlock, but Southeastern ports have retained a share of their Asian traffic and are looking to keep up the momentum. According to a research report by American Shipper, a third of retailers and a quarter of manufacturers surveyed said they planned to make structural changes to their supply chains, shifting at least 20% of business to East Coast ports.

Jaxport’s Schleicher was a bit more conservative, noting that “after a couple months of big growth in the immediate aftermath, things have stabilized again. Jaxport and its counterparts have seen steady increases, but nothing dramatic.”

But Southeastern ports are taking actions to improve infrastructure and increase capabilities in order to sustain momentum from the bump in Asian traffic, such as Jaxport’s move to dredge the St. John’s River in order to accommodate larger ships coming in on the long-haul Asia-Pacific routes. Schleicher said the project was “moving along nicely. Dredging has been approved for the 47+2 plan, engineering is completed, and we expect dredging to begin in the first quarter of next year.”

PortMiami has also completed similar projects including a new fast-access tunnel that links the port directly to the highway system and an on-dock rail service to move cargo on and off vessels more efficiently. Looking ahead to the completed expansion of the Panama Canal and the increased efficiency due to
reduction of loading and unloading on to ground transportation, Kelly said he “can’t predict the outcome, but it has, and will continue to bring opportunities to smaller ports on the East coast.”

While the worst of the West Coast deadlock may be long over, the landscape of shipping has been redefined by the ascent of Southeastern American ports to the big leagues. And with shipments incoming from China on the rise, it’s unlikely Jaxport and its ilk will settle for anything less than a still greater share of the sector. ♦