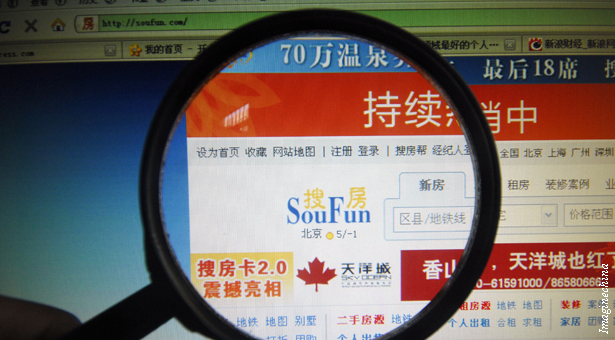 Something funny afoot with Soufun

China’s tech sector is fast growing, and this week has been quite the bull run for shares in several internet companies: As of trading close Wednesday, E-Commerce China Dangdang (DANG.NYSE) had shot up nearly 10%, e-commerce company LightInTheBox (LITB.NYSE) was up nearly 11%, search company Baidu.com (BIDU.NASDAQ, B1C.FRA) had risen 12% and online clothing seller Vipshop (VIPS.NYSE) was up 15%. Most perplexing is the mysterious 27% rise of SouFun (SFUN.NYSE), the country’s top real estate services and data website. Overall bullishness on the sector, fed by excitement over Alibaba’s massive jump in profits, no doubt helped this week. The incredible jump in its stock price led the New York Stock Exchange to contact the company about “unusual market activity,” with the company issuing a statement that it couldn’t explain the gyrations. “Fundamentally, I have no idea why” the stock would move so much, said one analyst who wasn’t authorized to speak to the media. Beyond fundamentals, it’s possible that after a short seller targeted SouFun and met with a steadfast response from the company, that short sellers have had to move to cover their positions and driven up the stock. Regardless of the run up in price, SouFun appears to still have room to rise. The company is most strongly linked to real estate transaction volume rather than home prices, the analyst said, and sales in China have continued to climb.

Out of your element

Mincing around in Shanghai’s urban environs may cause trouble for country bumpkin Yuzhou Properties (1628.HKG). The Fujian-based property developer bought a US$211.7 million piece of land in Shanghai’s Jiading district late last week, a move that could leave it short on cash should China’s economy deteriorate. Yuzhou’s primary market has been in third- and fourth-tier cities, where developers can pre-sell apartments as soon as the foundation of the building is in place. In Shanghai, however, the company will need to wait until the shells of buildings are erected before in can start making money from the project. Investors should note that Moody’s Investors Service said the purchase drained the company’s liquidity, and therefore its ability to weather a financial downturn. At the same time, an analyst who covers Yuzhou, who was not authorized to speak to the press, said although the price of the land was high in Jiading, the buy “had not led to a negative impact on the company yet.” In June, home prices climbed by 12% year-on-year in Shanghai, a good signal for developers. But a slowdown for the sector could catch a company like Yuzhou without enough cash on hand.

Investment dollars blowing in the wind

State-owned firms, the kind that build roads and bridges and huge dams, have been hanging on Premier Li Keqiang’s every word, straining for some small hint that his government will give them projects to build and money to build them with. The companies have been rather disappointed lately. Another government spending spree does not appear to be in the works. That is, unless you’re into renewables or the IT sector. Li said last week that these industries would be the targets for some finely tuned stimulus, according to a Bank of America Merrill Lynch note. Among green energy companies to watch are China Longyuan Power (0916.HKG), China Datang Corp Renewable Power (1798.HKG) and Huaneng Renewables (0958.HKG), said Keith Li, a utilities and renewables analyst at CIMB Research in Hong Kong. All three focus on wind power and are likely to soak up the government’s charity. China’s solar sector will also benefit from the stimulus but it’s still struggling to recover from a high level of overcapacity that set in two years ago. “The solar sector is still very congested and competitive. I still have a big hesitation to call a buy on the solar sector,” Li said. So, at least for now, investors looking to play mainland policy should hold out for a windy day.

The Hong Kong IPO market continues to falter with synthetic stone maker China Golden Phoenix (1337.HKG) pulling its issue before its planned debut on Wednesday. On the bright side, China Aluminum Can has shot up 22% since it floated on July 12 and Sinosoft Technology Group is up 6% despite a weak opening day. Mainland TV program firm Wisdom Holdings is also up 5.7% from its IPO last week. The market for new issues overall lacks consistency and the pipeline for listings has emptied again with the next IPO slated for August. Perhaps Alibaba or Shuanghui International’s still-distant listings might revive the market.