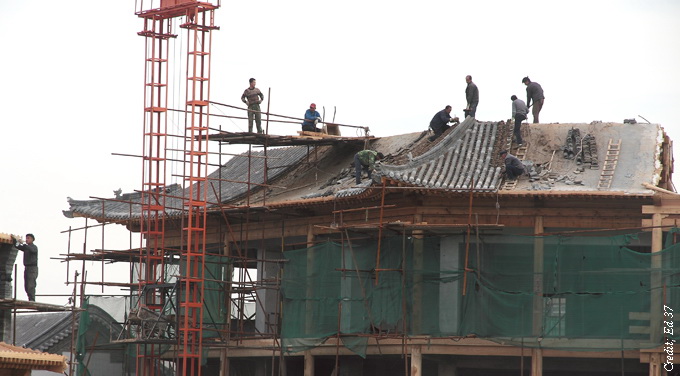 A year ago, rising domestic property prices would most likely have prompted policymakers to reach into the cupboard and pull out a blanket and smother them.

Former premier Wen Jiabao, who stepped down in March, oversaw a nearly three-year long campaign to control housing prices. Government efforts included direct action such as price growth limits in cities. There were also moves to curb the flow of lending to developers.

His successor, Li Keqiang, is so far showing more flexibility in imposing controls on the housing market, even amid rising perceptions in the general public that the cost of owning your own home is too high. With housing price growth seemingly back on the upward track again, that stance may be tested, but is unlikely to be reversed.

Recent data suggest an upswing is underway. At the end of last week the National Bureau of Statistics (NBS) said the value of homes sold climbed to US$113 billion (RMB 691.1 billion) in September from US$84.2 billion a month earlier.

Prices in first-tier cities jumped almost 20% year-on-year last month, according to reports. In August, house prices in 70 major cities tracked by the NBS were up 8.3% from the same period a year ago, one of the fastest paces of gains since the government started its price control campaign.

And yet still no big announcements from Beijing.

“I think the new government has a higher tolerance on the housing price to rise,” Raymond Ngai, a senior property analyst at Bank of America Merrill Lynch, said at a press conference in Hong Kong last week.

This isn’t to suggest that Li and other senior officials have no pain threshold: The Chinese government is keenly sensitive to issues that galvanize strong public opinion. But they appear to be taking a more nuanced approach to dealing with the real estate market.

Property is one of the few positive sectors this year, underpinning fragile economic growth and helping Beijing meet its GDP target. Crippling the sector would have unwanted consequences.

The government has the flexibility to implement a variety of policies in various parts of the country, according to Ngai, who said that there is no nationwide housing bubble. In places such as Shanghai and Beijing and some core second-tier cities where property prices gains outstrip the national GDP headline growth figures, further tightening is expected.

Somewhere like Wenzhou in Zhejiang province, where prices are falling, local officials will be given more freedom to selectively implement national policies. In early August the city announced that it would allow first-time homebuyers to purchase second homes. That is sure to bring relief to local governments. They rely on land sales to property developers for up to 25% of their income, according to Bank of America Merrill Lynch data presented at the press event.

However, Beijing still has its hands firmly on the controls and any easing will be closely policed.

Wenzhou is a special case when it comes to economic reforms; as a major entrepreneurial centre it is given leeway by Beijing to test new ideas. Other areas still lack that power.

A case in point is the city of Zhoushan, also in Zhejiang. Local media in mid-September reported it was loosening some of its home purchasing restrictions. Days later the local government distanced itself from the reports.