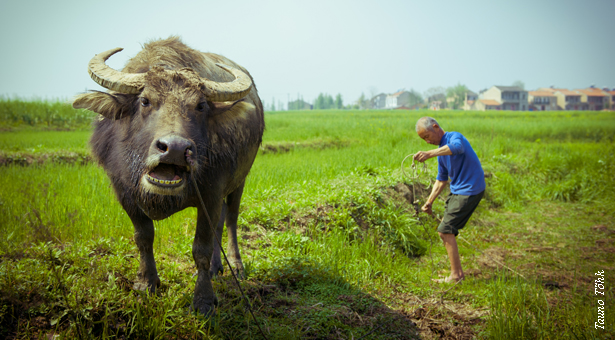 Lynette Ong is an associate professor of political science at University of Toronto, where she is also a faculty member of the Asian Institute at the Munk School of Global Affairs. Her most recent book, “Prosper or Perish: Credit and Fiscal Systems in Rural China,” examines the nexus of China’s rural credit and fiscal systems.

Credit has been the subject of much scrutiny in China, with broad concerns about rising non-performing loans and wasteful lending to state-owned enterprises. While major government-owned banks steal the most headlines, it’s also important to understand how credit operates at the lowest grassroots levels. Unsurprisingly, that system has risks and inefficiencies of its own.

Rural Credit Cooperatives (RCCs) are China’s main official banking institutions servicing borrowers outside of cities. The lack of alternative savings institutions and investment channels has made RCCs very popular savings options in rural China, where the only other option is often keeping household savings under the mattress. The banks are then officially charged with lending those funds to support agricultural development among farm households.

This bias toward government enterprises did not yield positive returns for the cooperatives either. At the end of the 1990s, the official nonperforming loan rate for such cooperatives was estimated to be 50% of total loans. Indeed, before the cooperatives were restructured in 2003, about half of China’s 40,000 RCCs were technically bankrupt or had negative net worth. My own estimate suggests the rate of bad loans to TVEs was as high as 80% in the late 1990s.

In developing countries, it’s not uncommon for rural banking institutions to direct a disproportionate amount of their loans to large rather than small borrowers. But there are unique political and economic reasons for this phenomenon in China.

Although they are officially banking institutions, RCCs have been forced to walk a line between China’s fiscal and banking systems, which serve inherently different economic and social objectives. The fiscal system plays a redistributive role: It collects taxes from the “haves” and redistributes the revenue in the form of social services to the “have-nots,” at least in theory. In contrast, the banking system has an intermediary purpose: Banking institutions pool capital from savers and allocate it to borrowers, with the price of loans reflecting the risk profiles of the borrowers.

The intermediary role of banking institutions improves the efficiency of capital allocations by channeling funds from areas with excess savings to areas with a greater need for loans. Alternatively, the use of savings to serve a fiscal role can bring with it huge inefficiencies in capital allocations. Moreover, when this capital is allocated it is often subject to political considerations rather than hard-nosed economic assessments. In other words, these loans often end up in the hands of politically well-connected borrowers who have little incentive to repay them.

Local interference in credit allocations is an unintended consequence of the systemic demands of Chinese political institutions. The behavior of those in local government is largely motivated by the Communist Party cadre evaluation system and by the fiscal system. Cadre evaluation emphasizes local economic growth and improvement of fiscal revenue to the exclusion of everything else. This forms the basis of local officials’ promotion and career performance.

Local governments in China are additionally responsible for financing 70% of government expenditures, significantly more than in most countries. These include the bulk of government social services. But local governments face a systemic imbalance between the expenditures they are expected to make and the means they are given to generate revenues. To meet the central government’s demands, local officials siphon resources from formal credit institutions to finance local industrial development for the purpose of raising revenue.

Like all local bureaucratic agencies in China (though RCCs aren’t government agencies, strictly speaking, but they have had a long history of being subject to local government control), the cooperatives are subject to a dual accountability system in which one part is political. Under the system, managers in township cooperatives report to county cooperative unions, but they were also accountable to township party secretaries. Similarly, county cooperative unions were also answerable to county party bosses.

Until the late 1990s, local party secretaries had veto power over use of personnel and financial resources held by the cooperatives. RCC managers formerly were appointed, evaluated and promoted by local party secretaries. This system explains the bias in lending patterns toward local government-related firms and projects across all locales, even though the cooperatives’ mandate was to serve the agricultural and rural community.

Since 2007, the central government has encouraged the establishment of a host of grassroots and informal cooperative financial organizations as part of efforts to reform rural finance. Market liberalization was intended to inject competition into a sector that had hitherto been monopolized by RCCs.

Contrary to its name, township and village banks are typically established in county-level cities that have a vibrant industrial sector. They function like full-fledged banks, offering saving deposits and loans. But, a TVB license only allows business operation in the locality. Foreign banks, such as HSBC and Citibank, are among the holders of TVB licenses.

Microcredit companies typically issue loans up to RMB10,000 or RMB50,000 yuan but are not allowed to accept saving deposits. Rural mutual aid funds range from formal institutions registered with the department for industry and commerce that are allowed to absorb savings as well as issue loans, to those endorsed by the central government for poverty alleviation purpose and those endorsed by local governments that can only absorb savings indirectly as membership fees. Because existence of these emerging credit institutions is largely dependent on credit demand and supply of the localities, their distribution and density differ from one locale to another.

In addition to that, subject to certain conditions, RCCs can choose to adopt one of three institutional models: the rural commercial banking model, rural cooperative banking model or the existing model.

At the beginning of the reform, only RCCs in highly industrialized locales with better financial performance could become rural commercial banks. They conduct business like any urban commercial bank and are similarly bound by few p
olicy requirements. Rural cooperative banks are a hybrid of rural commercial banks and credit cooperatives. While they can raise equity by bringing in individual and enterprise investors, they are required to allocate a certain proportion of their loan portfolios to agricultural projects.

A majority of RCCs nationwide, particularly those in the central and western regions, have opted to become rural cooperative banks.

As of now, the institutional reforms are still ongoing. More RCCs have converted to rural cooperative banks and rural commercial banks over time. As the conversion requires improvement in financial performance as a prerequisite, the goal is to ultimately reform underperforming RCCs.

Despite these institutional changes, and the accompanying growth in assets, liabilities and shareholders’ equities, their long-term sustainability is not necessarily better than before the restructuring.

Though formal ties between local governments and RCCs have been severed, the former is still able to exert a certain degree of control over resource allocations. This is not only attributable to long-standing political culture in China, but cadre evaluation and fiscal decentralization still put substantial pressure on local governments to prioritize local economic development to the exclusion of social development.

Bailouts in the name of reform could actually worsen perceptions of accountability at RCCs. As part of the 2003-2005 reform package, the central bank provided RMB165.6 billion conditional debt-for-bills swaps and RMB830 million earmarked central bank loans to help RCCs clean up their debt burdens and toxic loans. Together, the bailout accounted for about 10% of RCCs’ loan portfolio in 2003.

The total RCC bailout may have cost a fraction of the financial rescue of the state-owned banks in the early 2000s, but the stakes are high. The central bank’s financial subsidies have encouraged credit officers to continue making unjustifiably risky decisions and engaging in other financially irresponsible behavior.

The initial bailout raises the “moral hazard” that RCCs will expect to be bailed out again since they have managed to get away with bad financial decisions in the past. The expectation of financial rescue thus discourages RCCs from adopting meaningful institutional changes as well as from making financially sound decisions.

As local-government debt mounts, the actions of RCCs and other rural financial institutions are a key part of this growing risk. If reforms are not enacted to promote lending for purely economic grounds, the inefficiency of lending for political reasons will eventually become unsustainable.

This is an updated excerpt from “Prosper or Perish: Credit and Fiscal Systems in Rural China,” (Cornell University Press, Ithaca, New York, 2012) by Lynette Ong.