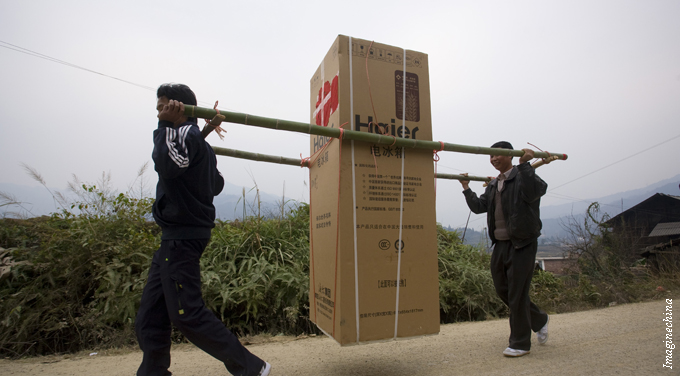 Arriving in late January at their rural homes to celebrate Spring Festival, millions of Chinese who work in the cities will sit at dinner tables surrounded by TVs, fridges and all manner of modern conveniences. A decade ago this picture would have been very different.

Rising incomes have given farmers extra cash to pay for such goods, and it is the e-commerce revolution that has furnished many of these homes.

Between 2008 and early 2013 rural shoppers drove huge growth in the white goods market, supported by three subsidy programs from the central government. Although those growth rates have tailed off since the schemes came to an end, the continued increase in rural earnings is creating genuine demand for such goods.

The per capita net income of rural residents grew by 10.7% to RMB7,917 (US$1,304) in 2012, according to official data. According to a quarterly survey of Chinese consumer confidence published by Nielsen, a research firm, residents in the lowest-tier cities and rural areas are most willing to raise their spending.

Rural consumption growth was expected to outpace that of urban areas in 2013, said a report by a department of the Ministry of Commerce published last May.

More of this rural shopping is being done online. Farmers and their families make up almost 28% of all internet users in China, exceeding 165 million, and are the biggest source of new netizens. Recognizing this potential, large e-commerce firms are coming up with creative marketing strategies such as painting adverts on barnyard walls and promoting at rural wet markets.

Dispatching orders to farms can confound the biggest of e-retailers, however. China’s vast, geographically challenging interior cannot easily be weaved together to create the efficiencies that are the hallmark of the most developed delivery networks.

Undeveloped infrastructure in rural areas, such as poor roads, insufficient information platforms, which increase logistical costs, and a lack of effective supervision and policy support contribute to the difficulties, said Hong Tao, a professor at Beijing Technology and Business University. State management of rural logistics is also to some extent “chaotic,” Hong noted.

That’s where Alibaba Group and Haier Electronics come in.

In December, Alibaba said it would invest US$364 million to form a joint venture with the logistics unit of Haier, the largest white goods maker in the world. Commentators have said the tie-up is targeted specifically at putting more major appliances into modest living rooms in towns and villages. Competition in this segment of the market is set to rise.

360Buy.com is investing billions of yuan in developing its own logistics network. Alibaba on the other hand is working with partners across the supply chain, including delivery networks and manufacturers. In addition to the Haier deal it has pledged to spend US$16 billion by 2020 to develop logistics channels that penetrate into China’s hinterland.

The cost of the goods will remain important to the country’s rural people but, when it comes to Chinese e-commerce, winning the market is all in the delivery.

“Most online retailers in China are offering similar products with competitively low prices, so they have to compete on service such as fast and reliable delivery and returns,” said Shu Zhou, assistant professor at San Jose University and an expert in logistics and supply chains. They can either build their own networks or partner up, Shu wrote in a paper published last year.

In this regard, Alibaba’s partnerships should prove effective. Shu proposed that working with a partner network is likely the most feasible approach for online retailers, citing the huge cost of building self-owned logistics systems, high maintenance and lack of operational know-how. The Haier network integrates internet platforms, marketing networks, logistics and after-sales services and under the deal with Alibaba will carry the goods of third-party manufacturers.

If either or both options can make significant gains in delivering goods to rural markets, visitors returning home next year will likely see many more shiny products dotted around the farm.