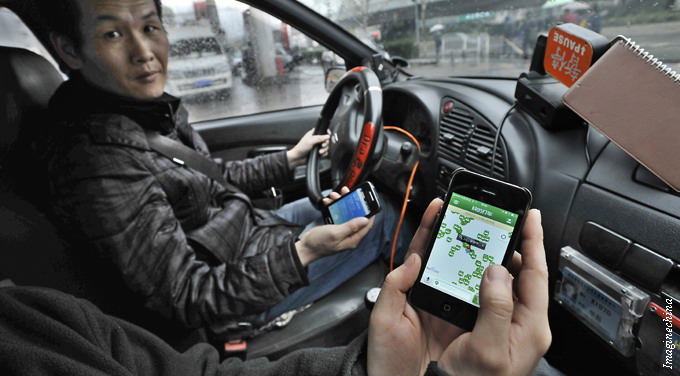 It’s 3am on the first day of 2014. Shanghai’s Hengshan Road, an area popular for restaurants and nightclubs, is lit up with what seems like hundreds of bright green taxi lights, inviting the rowdy New Year’s crowd to hop in. But the drivers are waving people off. They roll slowly down the road, only occasionally accepting passengers and creating a traffic jam that at times brings the long row of mostly empty compact sedans to a standstill.

Amid a cacophony of car horns, it’s clear that this is not the scene of some cheery holiday celebration. When waved off, some would-be customers kick the sides of cabs. Drivers scream hysterically when unwanted passengers climb into their back seats. In a fit of frustration, one impatient partier opens a cab door and punches the driver in the face before his friends can pull him back.

Now and then, someone approaches a cab shaking their cell phone at the driver. The driver squints at his phone and waves them in – only to be stuck in the melee for another 10 minutes.

Smartphone applications that Chinese use to reserve cabs are spawning this madness on the streets of Shanghai. Customers input their location, destinations and often promise a tip to drivers who then rush to pick them up. Chinese internet companies designed dozens of the apps last year and white-collared workers in cities around China have downloaded them en masse. So have many drivers hoping to score an extra US$1.60-2.4 (RMB10-15) on each ride.

In January, two of China’s biggest internet firms, Tencent and Alibaba, invested in two of the most popular taxi apps. Tencent backs “Didi Dache” and Alibaba has funneled money into “Kuaidi.” The companies have added rocket fuel to the trend by paying out rewards to drivers and passengers. By connecting an online bank account to their respective apps, Tencent and Alibaba pay RMB10 to passengers for each ride. Tencent pays RMB10 to drivers too; Alibaba offers RMB15.

It sounds like a loss-making operation for the internet firms but the giants are playing an online banking long game. To use the apps and get a rebate, customers must connect to the companies’ mobile payment platforms. This then boosts each firm’s share of this growing market. Once the generous payments stop, which they will once the market is saturated, Alibaba and Tencent hope users will spend digital cash on e-commerce platforms paying for other goods and services.

In the meantime, in a city of more than 20 million people and a shortage of cabs at peak hours, the payouts and tips can add up to a tidy sum. One person who claimed to be a driver said on a Chinese social media service Sina Weibo that he made US$374 (RMB2,300) in tips in a single day.

Understandably, the apps have become a point of contention among everyone involved: Policymakers, drivers and their companies, academics and ordinary urban Chinese. Supporters have argued that the new technology will push the taxi industry to innovate. Opponents say the cab industry is part of government-controlled public transport and that the apps are preventing many potential passengers, such as the elderly, from gaining access. Some have even pointed their fingers at the support from the major tech firms for making the problem worse.

“If it wasn’t Alibaba and Tencent, if there wasn’t so much money involved, the apps wouldn’t have such an effect,” said Gu Jun, a sociology professor at Shanghai University and a frequent commentator on public transport in China. “The app companies originally had a bit of money. Then Alibaba and Tencent came in and it really changed things.”

Disorder stirred by the apps has been common. Chinese media have written about accidents caused by drivers preoccupied by their smartphones. Drivers have reportedly stopped midway through rides and forced their passengers to the curb after getting a “big deal,” likely a sizable tip from another customer. Police have been called in during rush hour simply to help hail cabs that refuse to stop for passengers not using the app. Now the central government is promising to step in and sort out the disruptive technology before it turns the state-controlled market for cabs on its head.

Gu portrayed the apps as creating a highly irregular market, one where a baseline price is set by the government yet with a market-oriented bidding function built on top of it. Furthermore, the internet companies are subsidizing every ride that is processed through their apps, further distorting the actual demand for transportation. In one month, Tencent paid out US$60 million to drivers and passengers, according to McKinsey, a consultancy. The company booked 2.6 million rides at its peak on February 7. “This behavior isn’t competitive market behavior,” Gu said.

The market itself is divided down the middle. In an online poll conducted by popular web platform Sina in February, 47% of respondents approved of the apps. They were likely the users who found rides quickly at peak hours or on busy thoroughfares. Some among the 45% that disapproved may have walked for blocks during a recent winter rainstorm in Shanghai while cabbies sped past, looking for booked customers.

As long as people keep downloading them, the government faces a severe dilemma in regulating the apps. From Gu’s perspective, officials must step in and exert control over the cab industry, which has been monopolized by the state for decades. However, in the same breath, the government’s current regulation model is no match for the newest mobile technology. Local regulators will have to move delicately on the taxi apps and slowly apply limited regulations to the most problematic areas, such as the extreme cab shortage during rush hour, he said.

The biggest city governments are trying just that. In Late February, Shanghai’s municipal leaders said drivers mustn’t book customers during the busiest hours in the morning and evening. Beijing officials are more worried about safety. They’ve put a ban on cabbies using more than one application in the hope that they won’t be too distracted at the wheel. In Shenzhen, the birthplace of the free market in China, the government has given the green light to the app without exception but neighboring Guangzhou has made Didi and Kuaidi illegal regardless of the time of day.

The central government even weighed in on the topic last week at the National People’s Congress. In an unprecedented sign of approval for the technology, transport minister Yang Chuantang said the government would “support and help to develop the taxi apps. Instructional policy will be issued，” suggesting that the technology had a role to play in the government-controlled market.

“This was the wrong answer,” says Sun Xiaomin, a professor of law at Tongji University in Shanghai. “He didn’t make a distinction between what is market regulated and what is government regulated.”

Taxis are an extension of the public transportation system, Sun says. Cab companies are state-owned and take instructions from local governments, not the market, making the service in principle the same as public buses. Cab drivers do not have the authority to choose their customers or change the price of the service. Also, Chinese regulation requires that public services such as buses, metro lines and taxis must be accessible to at least 90% of the population in order to not be deemed discriminatory.

“These are the rules in this industry,” Sun said. “Every customer enjoys the equal right to get a taxi. It’s not fair to old people who can’t use the apps.” Some estimates say just 40% of ordinary passengers have smartphones today.

The government can either ban the apps altogether or change the nature of the taxi industry itself, effectively renouncing its purview over prices, Sun says. But it’s one or the other, not both.

More likely than not, the apps will end up changing the market for cabs whether officials like it or not. On the regulatory level, city governments have limited methods of trying to st
op the apps. Police in Shanghai have reportedly resorted to stopping cabs at rush hour and looking at drivers’ phone. Forcing companies to shut off the apps could work temporarily but new software is bound to emerge from the ether of the Chinese internet, especially given the current demand for the apps. Even without backing from major internet companies, the apps have unlocked hidden demand for quicker access to cabs and showed many passengers are willing to pay more for better service.

Didi and Kuaidi have already joined a growing list of disruptive technologies that have pressured the Chinese government to concede space to the market. Alibaba and Tencent are also leading the way with internet finance, which is pushing the central bank to liberalize interest rates. Some cab companies are reportedly trying to integrate the taxi apps into their own operations systems, a step that would normalize the service.

The government will need to give new technology room to develop in markets that it has long monopolized, says Zhang Youde, the director of the China Urban Development Research Association and a professor at Shanghai University of Political Science and Law. The distortions the apps have caused will subside as services improve and customers, companies and the government become more familiar with it them.

“There will always be disadvantaged groups when new technology appears,” Zhang said “But that will change and the government can work to reduce that group … This is still developing and it hasn’t had its full explosive effect on the market. Now is not a good time for the government to try to control it.”

For the time being, fairness might have to take a backseat to the vitality of the market.