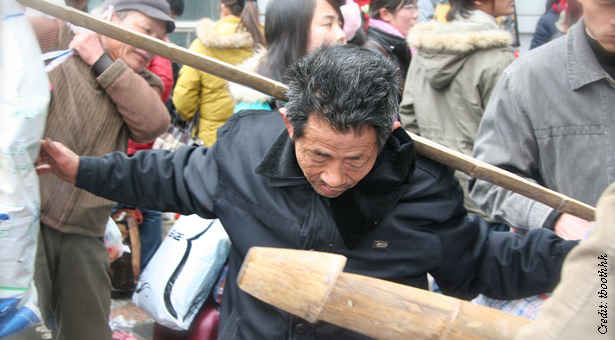 Picking up the tab

Factory managers may grumble about the rising cost of labor on China’s east coast. However, based on a forthcoming report from a leading state think tank, it’s the government that will foot the greatest bill for the ample supply of workers in cities – something to the tune of US$300 billion during the next eight years.

Migrant workers are greatly in need of public services. To make the hop from village to city, they need housing, health care and employment. Their children must be put in school and their parents require extra medical attention. Under the current household registration, or hukou system, most rural dwellers living in cities do not receive social services and gaining urban status is difficult.

There’s a lot of migrants too. About 160 million Chinese are working outside of the villages in which they were born. They now constitute roughly 22% of China’s urban population.

It’s a costly combination when attempting to officially integrate them. Such a vast horde of people seeking government support is set to spell out enormous hospital, housing and education bills, according to The Economic Observer, a Chinese newspaper that leaked details from an unreleased report from the Chinese Academy of Governance think tank.

China’s new government has stressed the need for further urbanization and for reform to the country’s outdated household registration system. The groundbreaking Chinese Academy of Governance lays out how much such efforts might cost.

In total, governments from the central level down to smaller towns will need to fork over about US$32.5 billion per year until 2020 in order to deliver services to this floating population, the newspaper said. That’s about 15% of the government’s total annual budget.

But the payoff from urbanizing migrant workers should be worth the price. In fact, the cost of neglecting the social needs of China’s primary labor force could be disastrous.

In that sense, the spending report from the Chinese Academy of Governance is timely. It’s one of the first concrete outlines from the government on where the money for migrants should go. At a cost US$224 billion over the next eight year, subsidized housing was the most expensive item on the social shopping list. Education would cost only US$13 billion. The academy is reportedly preparing to hand the plan to the Ministry of Finance.

However, The Economic Observer report provided few answers on how the government would pay for it.

Smaller cities in the east of China will be under the most financial pressure. Cities and towns in the east would have to come up with 65% of the expenditure. Small cities would need to pick up about 35% of the tab, the largest portion, or some US$80 billion over the next eight years.

But small cities are already debt-ridden and strapped for cash. Many of them would simply not have the funds to pay the medical and education bills of its out-of-towners, according to Cheng Enjiang, an adjunct professor of agricultural economics at Zhejiang University.

Cheng said he doesn’t see how these local governments can come up with the money. “They don’t have the budget. The money will need to come from the central budget,” he said, noting that he had not seen the report.

Bang for the buck

Regardless of how governments muster up the cash, it’s clear that spending on migrants now will help define China’s future economic outlook and its transition toward greater domestic consumption.

Multinationals already yield some data on how much it will cost to pay for better worker benefits but also reveals the resulting gains in productivity. Based on information reported by these global companies, moving workers from migrant status to permanent contract worker status – a shift that would happen more broadly under forthcoming hukou reform – increases costs per unit of output by 4.5%, said Andy Rothman, China macro strategist at brokerage CLSA,during the firm’s annual conference in Beijing on Monday. But the cost of officially urbanizing migrant workers would also boost worker output by 27%, he said.

A plan to detailing measures to reform China’s hukou system could be released later this year, Rothman said.

The reforms are urgently needed to encourage migrants to consume, an important next step for the Chinese economy. Without social support for children and parents, migrants will continue to remit money to the countryside instead of spending it in the city, Cheng said. If the migrants don’t have access to medical services or adequate housing, they will continue to save their money as opposed to consuming.

Promoting consumption among rural residents is seen as a big part of the transition to an economy driven by consumption. The country is in the throes of redirecting its growth model away from one based on manufacturing and exports.

Without solid outlays from the government, the next generation will also struggle to urbanize. The children of migrants are often left in the countryside with parents and don’t have access to quality education. If that practice continues long enough, the educational gap will feed growing socioeconomic inequality in future generations.

“What will happen with these children?” Cheng said. “That would be a long term loss to the economy and to the society.”

Putting a price tag on urbanization is an early step toward avoiding these losses to society and starts the discussion of how it will be paid for. The cost may be even larger yet: The expenditure detailed in the Chinese Academy of Governance report considers only the migrants who have already moved to the city, and many of more than 600 million rural residents could still make the move.

There is little doubt that China’s rural residents will continue to leave the village and search out a better life in the city. The transition is imperative to the country’s future growth model as well as the efficiency of its industry. The government should continue counting the costs of what looks to be the greatest movement of people in the history.