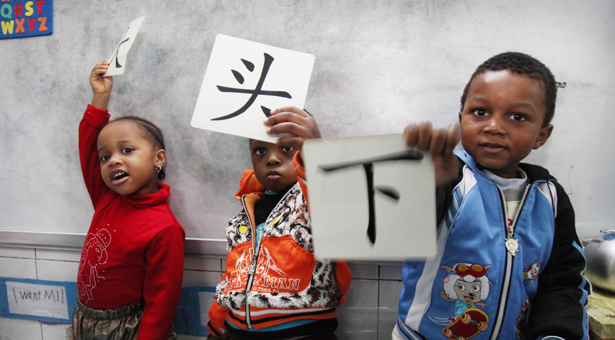 Is colonialism really a thing of the past? In a speech in mid-July, South African President Jacob Zuma suggested that it has merely donned a more innocuous guise in form of the unbalanced China-Africa trade relationship. “Africa’s past economic experience with Europe dictates a need to be cautious when entering into partnerships with other economies,” Zuma told the China-Africa Forum in Beijing.

To the decorum-conscious Chinese, the timing of Zuma’s speech was likely an affront. Hu Jintao had just promised Africa US$20 billion in new loans, double the amount Beijing pledged three years earlier at the same forum. Trade between China and Africa ballooned to US$166 billion last year, with Africa exporting raw materials such as crude oil and copper in return for investment and cheap manufactured goods.

Many people are suspicious of China’s global resource acquisitions. Like Zuma, they may view them as a colonial-style campaign to wrest commodities from countries that are too poor to protect them. But in her new book, “Winner Take All: China’s Race for Resources and What it Means For Us,” Zambian-born author and economist Dambisa Moyo argues for a more nuanced picture.

Moyo contends that China’s resource acquisitions have largely been beneficial, delivering much-needed investment and infrastructure to places Western businessmen ignore, like Africa. Yet she also identifies future risks: China is slowly cornering many markets, perhaps allowing it to set the price and flow of raw materials in a way that could be detrimental to other resource-hungry countries.

The pressures on global resources are ominous. World population grew from around 220 million to 2.8 billion in the last century, an 11-fold increase, and demographers project it may climb to nearly 10 billion by 2050. Demand for food, water, oil and minerals will inevitably rise, pushing up the price of commodities. That could dampen the growth of developing nations, damage Western living standards and potentially lead to war.

For those familiar with China, the first section of Moyo’s book may simply rehash old ground. That China has emerged as the most active buyer of global resources should not be a surprise: The country is poorly endowed with arable land, water, oil and other resources, and its centrally planned economy gives it the unique ability to enlist state and corporate actors in pursuit of political goals.

But while the story is a familiar one, Moyo’s statistics on the scale of Chinese global investment still impress. Between 2005 and 2011, China spent on average of US$1 billion per week on foreign direct investments, mostly in natural resources. Chinese export financing has risen from merely US$4 billion in 1995 to nearly US$250 billion in 2009 – a 60-fold increase in fifteen years.

Chinese cash has flooded into nearly every region in the world, transforming the international landscape. While developed countries like the US and Australia are typically the largest targets of Chinese investment, the transformative nature of Chinese capital is much more obvious in the world’s poorest regions, such as Africa. It is in the discussion of China’s role on her home continent that Moyo’s analysis shines.

In addition to being home to some of the world’s richest mineral deposits, Africa provides one-third of China’s oil imports and is home to one-third of the world’s untilled farmland. Commentators in the West often criticize China’s resource purchases in Africa as a kind of neocolonialism. China is seen as taking advantage of Africa’s weak institutions and property rights like a shifty pawnbroker, swooping in to buy the family jewels on the cheap.

But Moyo convincingly refutes this idea. She depicts the China-Africa relationship as a symbiotic one in which every country gets what it wants. Africa desperately needs investment to extract its own resources and allow its economies to grow. China is interested in being that business partner, and not an aid giver. Even if China’s aims are self-serving, its resource campaign is still, on balance, a good thing. “Whether it’s much-needed investment, job creation, or trade, hundreds of millions of people across the globe are in desperate need of exactly what China is happy to provide.”

She characterizes China’s role in Africa not as neocolonial, but anti-colonial, saying that China is wholly uninterested in assuming sovereign responsibilities. “If anything, China might justifiably be criticized for being too disinterested in the social and political constructs in many resource-rich countries.”

“Winner Take All” is impressive in its scope, ranging from the current state of global resource demand and trends in Chinese acquisitions to how commodity trading works and future trends in the demand and supply of resources. While Moyo writes like an equities analyst (someone who is a bit too busy to worry about eloquence), her writing is easy to understand, and the book constantly delivers interesting charts and data. For those eager to learn about commodity trading, “Winner Take All” will be indispensable primer on trading and the current predictions for global demand and supply imbalances.

Yet Moyo’s analysis of the Chinese economy, and in particular why China tends to overpay for resources, falls short. She argues that, because the state plays such a prominent role in the economy, China is prepared to pay a premium to ensure economic growth, reduce unemployment and maintain social stability – in other words, to prevent the kind of political instability that might occur if rising prices lead to food riots or company bankruptcies and unemployment. “No price is too large to keep peace at home,” Moyo writes. “Simply put … the Chinese ascribe value where others see none.”

Perhaps, but is that wise? She never says. It is not until much later in the book that she addresses just how China continually sidesteps economic realities, or how long this behavior can possibly go on. Chinese state-owned companies are so subsidized that they “have a close-to-zero cost of capital,” she writes, but then concludes with very little explanation that China’s investment boom is sustainable, and that growth is unlikely to collapse.

The book also mentions the current calls to rebalance China’s economy away from investment and exports and towards consumption. Historically, countries increase their consumption dramatically as their per capita income hits US$13,000. China is nearing this level, and as a result Moyo foresees a surge in demand for refrigerators, washing machines and other consumer goods.

That is probably true, but she fails to address the other side of the equation. As incomes rise, more people will be employed in services, and manufacturing activity will both decrease and move up the value chain, reducing demand for raw materials. China is likely to continue urbanizing and constructing buildings and infrastructure, but surely this process will slow as the country develops.

Another section discusses how commodity traders seek to diversify their portfolios by buying securities that are negatively correlated – i.e., one will gain in value as the other drops, thereby minimizing losses. Moyo mentions that China’s portfolio is diversified across countries and hedged by creating relationships based on giving loans and building infrastructure, yet she doesn’t address whether China holds negatively correlated positions. Given the absence of hedged positions, could slowing growth and accumulating bad investments in China reduce the value of the country’s commodities portfolio, potentially triggering more bad debt and slower growth? This frightening possibility is not addressed.

What effect China’s activities will have on resource prices and availability has long been a million-dollar question for commodities traders.
As “Winner Take All” demonstrates, more people outside of this space should be considering it.

It’s not yet clear what effect China’s resource grab will have on the world, or even if the effect will be positive or negative. In theory, if the market is working efficiently, China’s commodity hunt should leave everyone better off, as their bids for resources lead to an economic boom around the globe, she writes. “In practice, however, the demand for finite commodities could just as easily raise resource prices and spawn inflation that pushes worldwide living standards down.”

China is the only global power carrying out a concerted, long-term plan to accumulate resources; other countries that are not so far-sighted could be caught short. Moyo argues that there is a very real possibility that China could quietly corner certain commodities in the future, including perhaps copper, lead and zinc. If China’s buying power does drive out other competition, the market would effectively become a monopsony, in which one buyer (China) faces many sellers and can therefore dictate prices.

This behavior could be detrimental for other market players, but no cohesive global movement or legislation exists to deal with it. Other countries should follow Beijing’s model in readying themselves for a new world order in which every country needs to be cautious of dwindling global resources and other countries’ efforts to monopolize them. As Moyo writes, “The world needs to face up to hard facts: the commodities outlook is fundamentally bleak.”