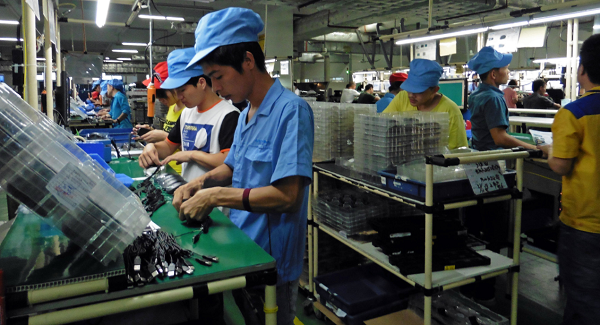 Caixin’s manufacturing Purchasing Managers Index (PMI) data for April released Wednesday showed a mixed outlook for China’s manufacturers. The headline figure rose slightly from March, showing that the sector continues to perform relatively strongly, but there are signs of slowing demand in some areas that could be cause for concern.

The index rose from 51.0 to 51.1, indicating a small expansion in China’s manufacturing sector away from the neutral benchmark of 50.0. This is welcome news given that the reading declined by 0.6 points month-on-month in March, which triggered worries at the time that the sector was beginning to be affected by the ongoing clampdown on pollution and other macro issues in the Chinese economy.

The breakdown of the data revealed a mixed-but-stable bag, with few significant results thrown up. Manufacturing output grew, but by a modest amount, while new orders slowed to a seven-month low. New export sales also fell by a marginal degree for the first time since November 2016, suggesting a possible cooling of demand. This is corroborated by rising inventories, which can indicate that demand is beginning to lag behind output.

Julian Evans-Pritchard of Capital Economics doesn’t anticipate that the stability will be long-lived “given the drags on economic activity from regulatory tightening and slower credit growth,” adding that the previous tailwind of unwinding winter environmental curbs should have now “mostly run its course.”

Sentiment among business leaders also reached a four-month low on the back of weaker demand.

The official PMI, issued by the National Bureau of Statistics, contracted by 0.1 from March to 51.4. The official report painted a similar picture to that offered by Caixin, with most of the key figures remaining largely unchanged from March, with some signs that demand is cooling.

The index for new orders also fell by 0.4 points month-on-month in the official PMI, and the figures for new exports and imports declined by 0.6 and 1.1 respectively. Output was unchanged under the official reading.

Analysts at Mizuho leave their outlook of “stable economic growth in 2Q18” unchanged based on the data, although with expectations that deleveraging could act as a possible headwind.

ANZ Research pointed to the potential upsides from April’s official PMI, pointing out that the sub-index indicating sentiment among small businesses has remained above 50 for two consecutive months now, after falling to 46.7 in January and February. The company attributed the uplift to the recent tax cuts and other stimulus measures introduced by the Chinese government.

“The targeted RRR cut became effective in January, and several rounds of tax cuts should have provided a lift to business sentiment of small enterprises. We may see this trend continue in coming months,” ANZ analysts wrote.