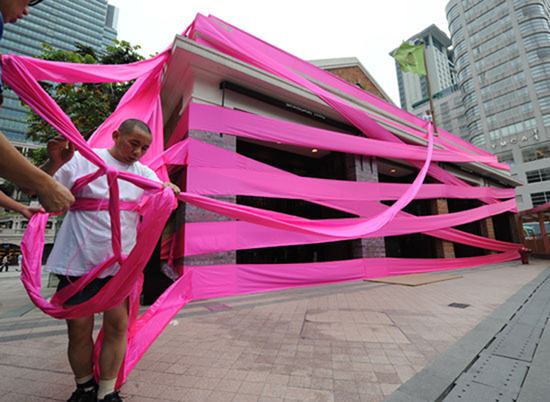 In recent years, developing creative parks has been one of the government’s main methods of pushing forward cultural industries. Old factories or warehouses have been converted into community spaces for artists, designers, architects and other creative types to work, play and create.

Between 2006 and 2010 Beijing approved 30 cultural and creative industrial zones, providing a home for about 10,000 enterprises. In Shanghai, there are more than 70 such areas. The support is a crucial boost for artists, who are often vital voices that shape the identities of rapidly-changing cities.

Recently, however, many in Shanghai’s grassroots arts community have been mourning the eviction of artists at 696 Weihai Road, a downtown compound of century-old warehouses. Since 2006, the area has been a commune for dozens of low-budget galleries, artist studios and creative enterprises – a place where creating art trumped selling art.

After fighting off eviction rumors for some time, occupants were given final notice this year to leave by May 20. The Social Security Bureau, which owns 696 Weihai, has said it is selling the buildings to the Jing’an District Government. According to painter and blogger Chris Gill, the plan involves a US$23 million renovation and renting out the space to “richer artists” at about RMB10 (US$1.54) per square meter per day – a far cry from this year’s prices of little more than RMB1 (US$0.15) per square meter per day.

696 Weihai’s artists will likely not be able to afford the increased rents and be forced to go their separate ways. Similarly, in the past other art areas in Shanghai – like Tianzifang and 50 Moganshan Road – have seen successive rent increases which have driven out smaller players. Culturally, this is a loss to the city.

Yet, on a commercial level, the news comes as no surprise. The location of 696 Weihai – just 300 meters away from the shopping street Nanjing Road West – is prime real estate, and grassroots artists all around the world have traditionally had to make do with finding cheap space. They are often the ones who revamp unused real estate; bringing a trendy and bohemian feel that suddenly injects more value into properties.

There is a better way to resolve this conflict. The Jing’an District Government and other up-and-coming urban areas in China have the opportunity to utilize the color that grassroots artists can bring to a neighborhood. Rather than simply showing low-budget artists and small galleries the door, the government should subsidize rental costs and provide a space for them.

The authorities should see this as a chance for the urban neighborhood to flourish – perhaps by building a public space where studios and small galleries are mixed in with local restaurants, creative businesses and residences. New artists who are out to get noticed will certainly be able to add fresh flavor to that.