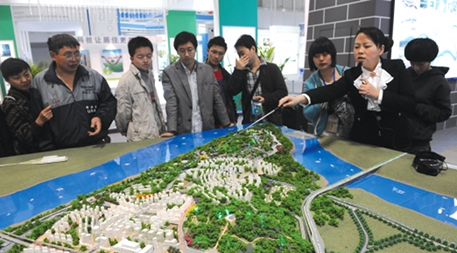 The acronym HOPSCA (hotels, offices, parks, shopping, convention centers and apartments) isn’t yet widely known across China, but it’s quickly demanding nearly every city’s attention. Up-and-coming economic centers like Xiamen, Shenyang and Ningbo are all planning ambitious developments, and Hangzhou is said to be considering as many as 100.

A term used to describe integrated developments in urban communities – where people live, work, play and shop in proximity – HOPSCA is emerging as an important piece in China’s urbanization puzzle.

The sixth national census, released in April, showed that the country’s urban population has reached 666 million – up 36% from the end of 2000. By 2030, the proportion of people living in cities is expected to swell to 70%. To help accomodate such growth, HOPSCA projects are intended to help create jobs, ease sustainability issues and establish landmarks for the city.

“But now, at this point in China’s economic development, cities are getting richer and more prosperous. More HOPSCA projects are being planned to make way for modern service industries – such as consulting and financial services – and also to provide spaces where people can spend their money.”

Despite the growing popularity of HOPSCA and the increased usage of the term among developers and city planners, in China there are contradictions on what the concept really entails. Without a proper definition, successful HOPSCA developments will be difficult to achieve.

According to Regina Yang, director of research and consultancy at Knight Frank in Shanghai, it’s hard to find a true HOPSCA in China. Many use the term as a real estate marketing tool to project images of trendy properties.

The term should only be used to describe landmark property communities that consist of the six functions, she said, which are located in downtown areas and take up a total gross floor area (GFA) of nearly 1 million square meters.

“The only successful one in China is Xintiandi in Shanghai, which has become a landmark area in the city with high-end residential buildings, retail brands and office buildings at One Corporate Avenue,” Yang said.

“In my opinion, local city planners may be confused about what HOPSCA actually is and interpreting it as single mixed-used properties.”

One frequently cited HOPSCA model in Asia is Roppongi Hills, a “city within a city” taking up 724,000 sq m GFA in the heart of Tokyo. The US$2.2 billion mega-development – completed in 2003 – incorporates office space, apartments, shops, restaurants and a number of entertainment venues, including a museum and outdoor theater. Construction tycoon Minoru Mori’s vision was to spark greater spending, increase leisure time and improve people’s quality of life in order to boost Japan’s national competitiveness.

Not everyone agrees with Yang’s definition, however. Stephen Fung, director at Bridge Capital, said that while a multi-functional development would require a lot of space, 1 million sq m GFA is not what defines HOPSCA. Single properties that consist of all six elements would still qualify. Shenzhen’s MIXC City, for example, contains all HOPSCA functions but has a total GFA of 188,000 sq m.

“I wouldn’t say there needs to be a specific size or area associated with the [HOPSCA] concept,” said Nigel Height, senior architect at 10 Design in Hong Kong, in an email interview. “But the combination of these facilities would suggest a certain ratio and quantity of hotels, offices, shopping, residential and entertainment space would be needed to make the development viable.”

Whatever the definition, Chinese city planners and developers have been rolling out HOPSCA in different forms to deal with employment and resource demands. The property projects first started appearing in the 1990s, according to Fung, and he expects that there will be a further 50-60% increase in the complexes over the next two decades.

One of the main benefits that HOPSCA brings to China’s urban development is that they help control urban sprawl and focus economic activity.

“Many governments around the world establish grand mixed-use schemes to initially create jobs and assist the construction industry, with a long-term view of establishing an economic hub that attracts industry, people and money,” Height said.

HOPSCA developments can also serve as important public spaces for people to socialize and enjoy leisure activities close to their homes or workplaces. This is especially important in cities where income levels are rising and white collar workers are seeking to live in areas where their life, leisure and work needs can be met, said Ba Gen, general manager of Kingkey 100, a 441.8 meter mixed-use development in Shenzhen and China’s newest landmark tower.

“In first-tier cities like Beijing, Shanghai or Shenzhen, people are living in the fast lane,” he said. “To meet these needs, HOPSCA projects are coming into being.”

One of the biggest challenges is how to shape HOPSCA areas into places that grow beyond manufactured districts. In order to attract more tenants, businesses and people to the area, they need to be a place that people are proud to call home.

“Right now, the main challenge for HOPSCA projects in China is related to bringing a dimension of art and culture to the area. There is a lack of this compared with HOPSCAs in Hong Kong or Japan,” Zhang of Bridge Capital said.

“They need to be a public space, a symbol of a modern city with an unique identity. But I think this will be built over the years.”