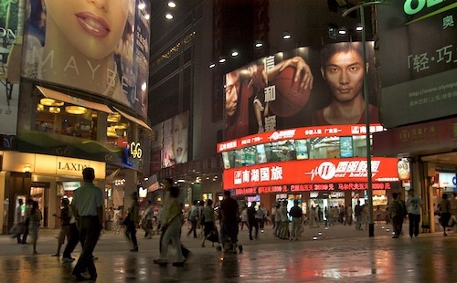 When Xinhua News leased a larger-than-life TV screen in New York City’s Times Square this summer, the state media giant cast the event as a watershed moment for the country’s global PR campaign. That is probably a stretch; one screen in one American city does not do much for Chinese soft power. But the fact that Xinhua chose to mount its campaign through a digital outdoor ad does indicate the high regard this form of advertising enjoys in China itself. In the US, outdoor TV screens are curiosities. In China, they are not only effective but increasingly cutting-edge.

The country has latched on to digital displays for good reasons: Its economy has boomed through the global downturn, leaving companies hungry for any channel that reaches consumers. Website banners don’t cut it: China’s relatively weak consumer brands need the kind of storytelling ads at which video excels. Unfortunately, TV ads are expensive and restricted by the government.

Outdoor TVs can substitute, especially given China’s culture of socializing outside of the home and its densely populated cities, which boast many intersections with as much foot traffic as Times Square. And then of course there are the ubiquitous smaller screens in elevators, taxis, and nightclub bathrooms. Those who want to mount a nationwide ad campaign without going bankrupt could do far worse than video displays.

“There are a whole series of demographic and psychographic forces in China that are radically different, and affect how advertising, internet [and] mobile phones are being picked up here,” said Neil Ducray, managing director of TouchMedia, a company that operates digital screens in Chinese taxis. “Many of the media models you would use in the West are not particularly applicable here.”

Moreover, the potential of digital advertising is only just being realized. Network operators are now launching features that allow viewers to interact with the screen, join in promotions, and form relationships that are more likely to lead to sales. These developments spell greater profits for the industry’s key players – like Focus Media in office buildings, JCDecaux and VisionChina on buses and subways, TouchMedia in taxis, and AirMedia in airports – that have expansive networks, strong government relations and little competition.

Bumps in the road

The industry does face some risks that could derail its progress. For one, advertising is quite sensitive to fluctuations in the economy. In 2009, advertising spending fell nearly 10% year-on-year globally and 5% year-on-year in the Asia-Pacific region, according to data from ZenithOptimedia. The potential for further economic doom and gloom is difficult to calculate, but it cannot be discounted.

Media companies in China are also perennially at risk of sudden crackdowns. In the past few years, many cities have led clean-up campaigns to tear down billboards or displays. Last spring, Beijing banned ads promoting “hedonism, aristocratic lifestyles,” and “the worship of foreign things.” (Exactly what violated this rule was up to the authorities, but suffice it to say that removing ads promoting hedonism or foreign things cut heavily into revenues.) Regulators have also barred menaces like actors posing as doctors to pitch products and the too-explicit use of the Statue of Liberty.

The industry also faces challenges in measuring the effectiveness and justifying the price of its ads. This is fairly straightforward practice for other media: Websites often price ads on the basis of clicks, while TV channels typically charge by the duration of the ad. Companies like Focus Media and VisionChina, however, use a measure called “cost per mille” (CPM) to charge their clients – a flat rate for every 1,000 viewers they estimate see the ad.

While the industry stands firmly behind this measure, some believe it deserves greater scrutiny. “Whether or not a CPM basis makes sense, nobody knows,” said Tom Doctoroff, the Greater China CEO of global advertising agency JWT. “I think that companies like Focus Media have been very arrogant about resisting genuine analytical accountability.”

These obstacles are not negligible. However, they seem unlikely to greatly impede the industry. State intervention in advertising is a blessing in disguise for incumbents; as in other sectors, strict regulation often protects the ad industry’s biggest players by creating barriers to entry and thus decreasing competition. From Beijing’s perspective, the fewer media companies there are, the easier they are to control. And while digital ad clients would prefer a more accurate measurement of the return on their investment, they have few other options at present to reach coveted consumers.

Meanwhile, companies like Focus Media and TouchMedia are seizing on new technologies, like location- and time-based ads, that allow them to better target consumers and justify higher prices. A Focus Media screen in the lobby of an office building, for example, might advertise a salon down the street, or shift between McDonald’s ads featuring Egg McMuffins and Big Macs at different times of day. “No other medium can do location-based advertising, not even newspapers,” Chen Yan, Focus Media’s chief strategy officer, told China Economic Review. “Now we can fill the gap.”

Companies are also rolling out a slew of interactive features that can create deeper impressions on the viewer, gather consumer information and offer follow-on promotions like coupons that are more successful at bringing customers into the store. Companies say these features are succeeding in part due to the widespread adoption of smart phones and tablet devices, which have made consumers savvier at using digital screens. “Compared to when we started four or five years ago, iPhones and iPads have really educated the market about how to use interactive programs,” said Ducray at TouchMedia.

These interactive features are helping do away with complaints that digital ads aren’t able to target an audience or measure effectiveness. Ducray said one recent TouchMedia promotion invited passengers to fill out a short survey to win a free sample of cologne. “We were actually able to identify the 30,000-odd people that fit the client’s profile market, and only they got the coupon. The other people got, ‘Oh, bad luck, try again.’”

Chen said Focus Media is shifting toward interactive advertising that will help clients distribute coupons and run promotions. To this end, the company is introducing a “Xiangle” card that consumers can swipe on Focus Media LCD screens to receive special offers.

If they are successful, these new technologies will help digital advertising combine the reach of conventional media and the interactivity of the internet – increasing the reach of this form of advertising exponentially.

“A digital outdoor ad in a particular area might only attract a few thousand people,” said Chen Xiaotong, the CEO of Tom Outdoor Media Group. “But its second transmission on the internet can attract an audience that is a hundred or a thousand times bigger. When a brand connects with consumers in a meaningful way, there is a magnifying effect.”