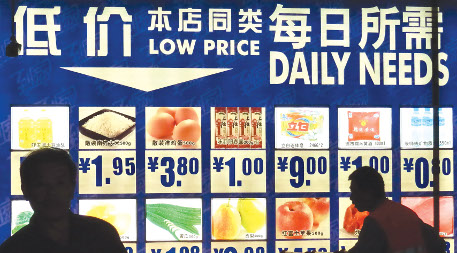 China, home to one of the world’s most ancient and diverse cuisines, is fast becoming a gourmand’s paradise. Even as traditional Chinese chefs indulge in flamboyant reinterpretations of the classics, local epicures are adding imported foods to their diet – Washington apples, Australian lamb chops and blueberries from Chile. Every day, it seems, a new restaurant “concept” opens in one of the top-tier cities, staffed by yet another imported celebrity chef.

But China, famed for serving food that is both delicious and dirt-cheap, is rapidly becoming an expensive place to pick up the check.

Even as property price growth slows, mainland food prices continue to inflate. In June, China’s measure of food prices spiked 14.4% year-on-year. That in turn drove up the overall consumer price index (CPI) by 6.4% – the sharpest annual increase in three years. “Relative to all other goods, the price of food has been increasing fairly steadily in China for almost the past decade and certainly since 2006,” said Richard Herd, head of the China desk at the Organization for Economic Co-operation and Development (OECD).

This rise in the cost of living is sparking dissatisfaction among the lower classes. More spending on food also threatens to crowd out other forms of domestic consumption, another key economic target. Authorities would love to solve the problem by fiat, but this has proved impossible.

Food prices are undoubtedly being pushed up by short-term factors, in particular the droughts and floods that swept the country this spring. China also began releasing pork reserves in July in an effort to blunt price increases. As a result, most analysts expect CPI growth to begin abating in the second half of the year, in line with typical seasonal trends. However, this is unlikely to bring long-term relief: Structural factors will maintain upward pressure on Chinese food prices for the foreseeable future.

For one, factor costs for farmers – in particular for fuel, fertilizer and water – are rising and being passed on to consumers, not just in China but all over the world. Meanwhile, the easy lending policies of the last two years have put more cash into the system, and rising wages have put more money in consumers’ pockets. Both add to rising food prices.

Demanding better food is not, of course, a bad thing. But when people upgrade their diet, they usually eat more meat, which multiplies the demand for grain. For example, it takes about four pounds of grain to produce one pound of pork – Chinese consumers’ favorite meat by far. China has 446 million hogs – more than the next 43 pork-producing countries combined – and it consumes half of the world’s pork each year. Keeping all those hogs fed with soybeans and corn is draining the domestic grain supply.

Chinese officials have gone partway towards reducing this pressure. In the mid-1990s, they removed soybeans from the 95% self-sufficiency quota and began importing volumes of cheaper beans from the US. The move led some to criticize the government for sacrificing food security and ignoring the interests of the domestic soybean industry.

But Jon Galligan, an agricultural analyst at CLSA, pointed out that importing pushed down soybean oil prices, a significant consumer benefit: “There are now millions of people in China that can afford cooking and edible oils that could not before.”

Cheaper oil is not the only benefit. Importing also helps China meet its environmental conservation targets. Growing grain is land- and water-intensive, and China has a critical shortage of both. The country has more than one-fifth of the world’s population, but less than one-tenth of its arable land. That ratio is only worsening: Urbanization and environmental degradation wore away 6.6% of its arable land over the past decade.

China has already switched to imports for some land-intensive crops that aren’t consumed by people, like soybeans and cotton. Last year, it made headlines by importing 1.6 million tons of corn, the first meaningful corn imports in more than a decade – although that total only met about 1% of national demand. The government is likely to continue slowly increasing corn imports in the short term, said Galligan at CLSA. “By 2015, we might see 10-20 million tons of corn imported, or about 5-10% of total demand.”

Some argue that allowing these imports does not necessarily compromise security. Andrzej Kwiecinski, a senior agricultural analyst at the OECD, said that food security should be defined not as self-sufficiency but as accessibility, which includes the ability to buy food on international markets.

“Last year, China’s net imports of agricultural products were the highest of any year in the last 15 years, about US$20 billion. But at the same time it had a net export position of about US$250 billion. So China has the capacity to import.”

Even so, there’s little sign that China will abandon its goal of self-sufficiency, especially when it comes to grains eaten by humans. The country’s leading faction continues to argue for the old definition of food security, partly to protect unsophisticated rural industries from foreign competition, but also because importing isn’t a panacea for inflation.

Importers are also vulnerable to supply shortages. For example, corn markets remain tight at present, with only the US and Argentina offering much supply to global markets.

Furthermore, a surge of Chinese buying on global markets – and portfolio investments following this thesis – will itself push up prices. “More money comes in, it goes into buying more commodities, and that buying could very well create pressure in the market,” said agricultural commodities trader Michael Martin.

Bad news for consumers, but good news for global producers like Monsanto, Archer Daniels Midland and Pilgrim’s Pride, and for commodity exchange-traded funds like PowerShares DB Agriculture. This investment thesis holds even if China adopts a similar approach to food as it does to oil – namely, directly buying overseas producers. Rumors of a coming wave of Chinese investment in overseas agricultural assets would throw markets into a bullish uproar.

Either way, the era of cheap Chinese food is over. But there is another way for policy-makers to compensate.

China should join other countries in resuming the work on dismantling tariffs and import quotas that was largely halted during the financial crisis. Working out the kinks that create shortages and distort prices is the best way for China to ensure that, even though it has arrived late to the global table, it can still get its fill.