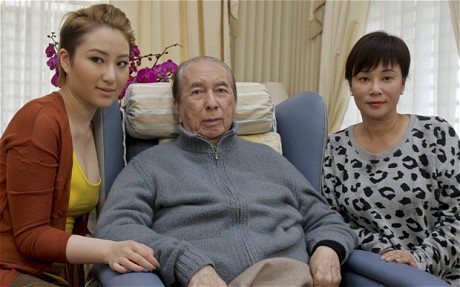 Not long ago, billionaire casino tycoon Stanley Ho told reporters about the sacrifices he made to establish one of Asia’s greatest fortunes. To build up his Macau empire of casinos, ferries, an airline, hotels and commercial property, work days had to stretch well beyond ordinary eight-hour shifts. Time has to be sacrificed for such success, he confessed, and that comes at the expense of being a dutiful husband and father for his four wives and 17 known children.

Earlier this year, Ho’s family issues boiled over. Well past retirement and confined to a wheelchair after an accident, the 89-year-old was the star of an ugly, soap opera-like ordeal which saw his four families fight over his estimated US$3.2 billion estate. Paparazzi and Hong Kongers flocked to his mansions, waiting for the next twist in the bitter feud.

While the dynastic dispute involves a Hong Kong family’s business dealings in Macau, the Hos’ infighting underscores succession problems elsewhere. The now aging tycoons that started most Asian family businesses in the years following World War Two are  now looking to cede control to their offspring – willingly and unwillingly. It is not unusual for empires to teeter.

Joseph Fan, a professor at the Chinese University of Hong Kong (CUHK), jointly studied 217 family companies in Hong Kong, Singapore and Taiwan between 1987 to 2005. He found that the five-year period in which there is a generational change in ownership and control tended to coincide with an average 56% drop in market-adjusted share prices.

History is likely to repeat itself even more drastically in mainland China, where firms will soon face succession tussles of their own. “I suspect that, 10 to 20 years later, when the first generation of Chinese entrepreneurs become old, they will meet similar succession issues – only more severe,” Fan said.

Problems associated with nepotism, messy inheritance arrangements and bequeathing founders’ strengths – relationships, ideologies and reputation – are common problems in young family businesses. But in China, where the one-child policy and a weak institutional environment present serious challenges, a succession crisis for family firms looms on a whole different level.

Problematic formulas
Fan has begun examining about a dozen publicly traded companies in China that have undergone succession processes. Though he admits his research is based on a small sample and is therefore not a scientific study, the early findings show that the mainland family firms dropped about 40% in value during the five-year period of leadership changeover.

One of the main reasons for the flourishing of family-operated businesses in China – about 90% of private companies are run by families – is also why they face succession issues. In emerging markets often presided over by  corrupt or at least excessively interventionist governments, entrepreneurs restrict management of business operations to family members who are seen to be more trustworthy and reliable.

One such example is China’s richest individual, 66-year-old Zong Qinghou, who is the founder, chairman and CEO of Wahaha, the largest bottled water and soft drink producer in the country. Zong, together with his wife and daughter, own 60% of the company. His daughter runs Wahaha’s manufacturing segment, which has an annual output value of over US$760 million, though Zong claims he has not yet chosen her as his successor.

“Since the 1800s, China has been through many wars and regime changes. And because of a variety of social and political issues, we have lost a culture of unity. For many generations, survival has been the key; people do not work together,” said Ge Dingkun, a strategy and entrepreneurship professor at China Europe International Business School (CEIBS) in Shanghai.

“If you look at other countries, people do not hire their sons or daughters – they hire the fittest candidates for jobs. But in China, because of a lack of institutionalized trust and its weak legal system, many founders and private-sector CEOs fear they will lose control if they bring in outsiders.”

And even if professional, non-family managers are hired, many Chinese entrepreneurs are reluctant to empower them. They will be asked to execute operations, instead of making important decisions. Ge says this is because many private companies fear that managers will learn their trade, and start their own competing businesses – a problem largely born out of China’s weak legal environment.

Furthermore, one of the main challenges for Chinese entrepreneurs is a lack of access to capital. As such, many borrow from a number of relatives, which leads to a host of different risks, according to Beth Epstein, a director at Hill & Associates, a risk management consultancy in Shanghai.

This includes making decisions for reasons related to inter-family politics. “There are often conflicts of interest, where firms make decisions based on family connections rather than business sense, for things like choosing suppliers or hiring managers,” Epstein said.

Search for successors
At the same time, tycoons add value to companies with intangible assets that aren’t always easy to pass on. Successful companies often depend on the vision and ideology of business-savvy leaders. Their reputations can attract employees and help ensure banks will lend money to their companies. The business and political relationships they nurture over many years are often lucrative.

While these are issues that family firms face all over the world, the situation is more severe in China due to the one-child policy. “There is a big question about whether Chinese entrepreneurs can even find their successor within the family when they retire,” CUHK’s Fan said. “The one-child policy is still in effect – what if this child is not interested in running the business? Or what if they are not capable?”

Unlike their parents who often endured hardships as children, offspring of business owners often grow up in affluent fashion.

As such, second-generation children are increasingly reluctant to enter the world of manufacturing and low-value industries, which make up about 70% of private enterprises in China. They are less excited about making shoes, toys and flashlights, than jumping into more glamorous up-and-coming internet and high-tech industries.

“Many children don’t like their daddy’s job,” CEIBS’ Ge said.

At the same time, even in cases where parents can pass on their businesses, there are other issues. Construction and real estate company Zhejiang Guangsha, for example, ran into trouble after its founder Lou Zhongfu passed on his business to his sons, Lou Ming and Lou Jiangyue. A Communist Party member and deputy director of the People’s Congress in Dongyang county, Lou Zhongfu’s Shanghai-listed company was largely built on his government connections.

Fan says that the company’s stock price dropped 150% during the leadership transition, not only because of the inabilities of his children, but also because local government changeovers and macroeconomic policy roadblocks have affected the property business.

Since 2006, the company was forced to rely heavily on underground loans and later found itself embroiled in credit scandals after defaulting on its payments. “This was a case that wasn’t just about a family business’ succession, but succession in an environment full of obstacles and uncertainty,” Fan said.

Many successful business leaders are reluctant to cede control of their companies until it’s too late. China’s current generation of entrepreneurs, for instance, does not have much experience with retirement and handover processes. Still relatively young, many believe succession planning is only necessary for 70- or 80-year-olds.

Healthy handovers
But Fan stresses
that the key to survival is to have a long-term vision, and to cultivate successors and prevent infighting early on. A company founder must embolden exactly what the company is built upon: the family.

“Chinese entrepreneurs work day and night, they hardly spend any time with family. But in order to have good family governance, you must lead by example. Spend time with family members, have common activities,” Fan said. “Educate children in the family to have a good value system and strong discipline, instead of having mistresses.”

While encouraging trust among family members is crucial, companies may also benefit from a code of conduct, a family charter or a committee to resolve personal issues. This kind of dual planning is popular in Europe, as having an additional layer of governance can help prevent family fallouts from spilling over into company affairs.

Not all family-run businesses are mired with problems, however. Epstein stresses that family bonds can also have a positive effect on companies. “If family members have a good relationship and good business practices, this can stabilize their company because you have less people coming and going,” she said.

A new generation of leaders can also provide a refreshing jumpstart to some family firms. Zhejiang Longsheng, originally a chemical producer for the textile industry, entered new markets thanks to a second-generation successor. The founder’s son, who had a PhD in chemistry, was working as a lecturer at Fudan University when he was asked to head the company’s research division.

Under his leadership, Longsheng developed a more efficient process to produce certain chemical intermediates. The company was then able to venture into the fine chemical sector – starting a new growth area for the business.

“Longsheng’s succession process has been quite smooth,” Fan said. “There have been no family fights, even though the second son assumed duty as chairman. The company’s stock price has been increasing ever since.”

Yet, despite some success stories, family and corporate governance are developing slowly in China. The ultimate fear is that many entrepreneurs are ill-prepared to ensure their empires outlive themselves – leaving them no option but to sell off businesses they have spent years building up.

“These entrepreneurs have ability and vision – and this will all be gone if they exit the country and give up their businesses,” Fan said. “I’m not just talking about material wealth, but the loss of intangible wealth … It will be a big social loss.”