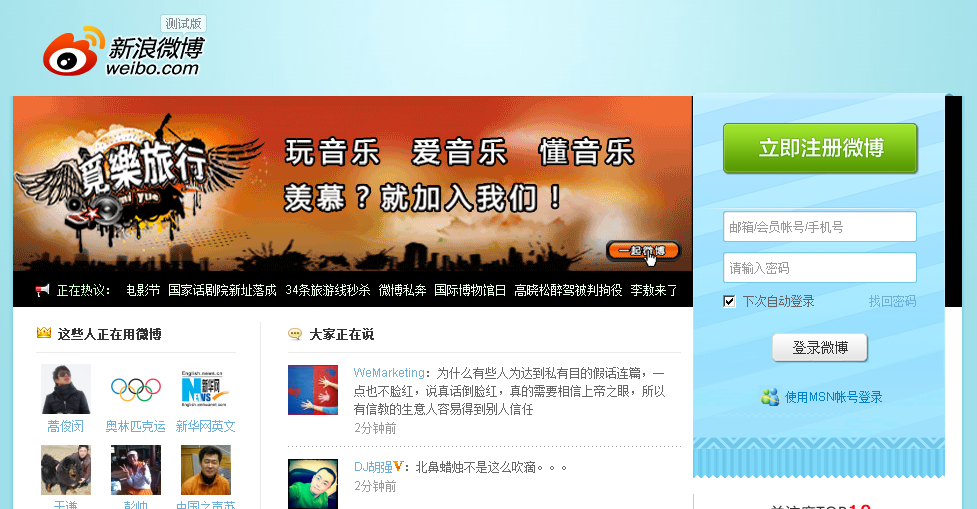 China is in the midst of a profound experiment in new media that may determine the future of how information and news is perceived and consumed by its residents. At its tip is Weibo, a microblog service operated by Sina, the country’s leading web portal.

Weibo is essentially a clone of Twitter (now blocked in China), but it has morphed into a whole new media class; more real-time and dynamic than blogging, as captivating and viral as online games. For many young Chinese, the speed of information distribution and the instant social validation of their postings makes Weibo a fantastic tool for expression.

Breaking news, views
Most major conferences in China now feature a “wall of Weibo,” a large LCD screen showing comments arising from the various presentations. Many Chinese celebrities have their own Weibo accounts through which they can engage with fans. Breaking news reaches users faster than via traditional news outlets. These phenomena may be nothing new to Twitter fans. But the content dispersed through Weibo stands out in a media landscape otherwise dominated by state-sponsored editors.

This doesn’t mean to say Weibo goes uncensored. Its existence relies on a government-mandated team that “curates” discussions that feature politically sensitive topics. Users, however, employ code words to evade the control system. As fast as the censors can delete words, users just switch to another term – it is a game of cat and mouse. Serial offenders have their accounts deleted.

With Weibo already in the process of switching from the Sina domain name to one of its own, it seems likely that the business will at some point be spun off through an initial public offering.

More interesting, though, are the wider implications of Weibo’s rise. First, the competitive landscape in China’s internet industry will change as other tech firms push microblog services. Tencent and Sohu already offer Twitter clones – the latter’s Fanfou reopened late last year after being shut down in July 2009 – but they trail Weibo and are likely to continue to do so. RenRen, a Chinese version of Facebook owned by Oak Pacific Interactive, may seek to participate, although this would mean developing a new product more or less from scratch.

It is not farfetched to suggest that Alibaba, Baidu or any of the country’s three telecom operators might also enter the space, trying to leverage their respective strengths in transactions, search and mobile data.

Second, Weibo may be able to position itself as a service provider to companies, allowing corporate China to exchange information with the public. Again, this is nothing new to those familiar with Twitter and Facebook, but the China context is important. By breaching the various walled gardens that many domestic firms have erected around themselves, Weibo would amount to far more than just a conversation and news medium; it would be a true pioneer in China’s “mashable” web.

Third, and perhaps most significant, is the cultural impact. Weibo is potentially the glue that binds together a generation of young Chinese raised on video games and free digital content. The ability to share and comment on information on any topic, event or person – even with censorship – points to a major shift in how people keep tabs on government and business in China. In this way, it will be comparatively easier for institutions to be held to account in the court of public opinion.

Pleasing two masters
Inevitably, there is a catch. Sina has effectively agreed to do whatever the government requires to stop the service from being outlawed. The inherent danger is that as Weibo grows in user numbers and notoriety, the regulatory burden imposed on the censors will become heavier. This may result in a safe and sanitized service largely devoid of the edge and originality that made it popular in the first place.

Tencent became the internet juggernaut in China on the back of its QQ instant messaging service, which was used as a platform to launch a variety of other products. Now Sina and Weibo look set to supplant it. But sustaining the service – and perhaps in the process re-defining information-sharing and new media in China – hinges on appeasing the regulators without alienating the users. No easy juggling trick.