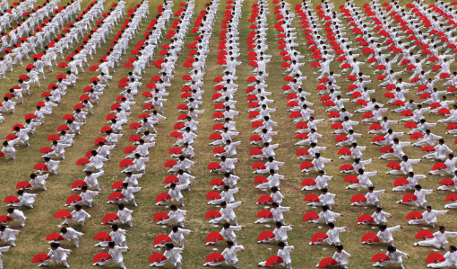 On the ground, it was obvious that something was amiss with Sino-Forest’s business. In southwestern China’s Yunnan province, the site of most of the company’s timber holdings, local people considered the thin pine forests that Sino-Forest had snapped up around their villages to be almost useless. And the company never showed up to cut, much less replant, the trees.

Yet, between 2006 and 2011, these holdings helped Sino-Forest balloon into the largest forestry firm on the Toronto Stock Exchange. Celebrity fund manager John Paulson bought a multi-million dollar stake in the company, bringing many other investors in his wake.

And then it all came crashing down. Research firm Muddy Waters was the first to unveil accusations that Sino-Forest was a “multi-billion dollar Ponzi scheme” that systematically exaggerated its assets and earnings. The report triggered an 82% decline in the stock. Then in late August, the Ontario Securities Commission suspended trading of its shares.

In retrospect, it seems almost inevitable that the combination of ignorant investors and non-transparent companies would be explosive.

“People sitting on the other side of the Pacific Ocean, unable to read Chinese, they were blind,” said Peter Humphrey, the managing director of research firm ChinaWhys. “And regulators here in China don’t give a damn about some obscure Chinese company that’s gone off and listed in America – nobody in China has ever heard of these companies anyway. So there was blindness on both sides of the ocean.”

Bears in the woods

Accusations of fraud have trampled one Chinese stock after another this year, encouraging many investors to shun Chinese equities altogether. The Halter USX China Index, which is made up of businesses that trade on US exchanges but operate mostly in China, had gained back some of the value in October that it shed in the previous month, but it was still down more than 20% year-to-date as China Economic Review went to press.

This bear market has all but eliminated the profits to be had from shorting Chinese stocks – short-sellers make their profits from the decline in the stock price, and prices are already so low they have little room to fall. As a result, research firms like Humphrey’s and AlfredLittle.com have turned away from short reports and begun helping institutional investors re-examine their long-term investments in China.

“We think investors have concluded that most of the Chinese US-listed companies have seriously misrepresented their financial performance,” Simon Moore, managing editor of AlfredLittle.com, wrote in an emailed response. Moore’s website was vaulted to short-selling fame earlier this year when it published a series of scathing reports about companies including SilverCorp, Harbin Electric and Zhongpin.

“AlfredLittle.com has not received any new short articles from contributors in the last month, indicating that valuations have come down so far that there are not many good opportunities for short sellers.” The site is now soliciting articles from investors with long positions, said Moore.

Depressed valuations offer long-term investors many opportunities in the Chinese market; thus far, however, it appears that only the largest investors are willing to take advantage of them. “I’m sure there are some investors who see good opportunities in certain Chinese stocks,” said Nick Einhorn of Renaissance Capital. “But these will likely only be investors with a reasonably long time horizon who are willing to ride out near-term volatility.”

Even Carson Block, the founder of Muddy Waters, is anticipating a comeback for Chinese equities. “Part of the ‘Fraudcap’ problem resulted from a combination of a lack of compelling investment opportunities elsewhere and excess global liquidity. This combination of factors led to excessive risk taking, which partly manifested in inflating the fraud bubble,” Block told China Economic Review. “So long as these conditions persist, which I think will be for the foreseeable future, there is a real risk that the China fraud bubble will re-inflate.”

Investors that do choose to wade back into the Chinese pool will need to do careful research on their targets. Thankfully, this year’s scandals have produced a kind of “greatest hits” of Chinese fraudsters – related-party transactions, unbelievable revenue or profit growth, and contradictory filings with Chinese and US regulators – that investors should be on guard for.

Block of Muddy Waters pointed out that a series of fast acquisitions – as in the case of Longtop Financial – may also be a warning sign. “One doesn’t even need to run a fraud to steal,” he said. “A common way of sucking money out of companies is overpaying for capital expenditures, particularly for acquisitions – significant kickbacks are all too common.”

Investors should also be wary of certain industries that have harbored more than their share of scams in the past few years. Natural resources companies – including those engaged in timber, agriculture, fishery and mining – have presented particular difficulties for overseas investors trying to assess their assets or production. Companies that make exotic products, like traditional Chinese medicines and biotechnology, are also difficult for overseas pontiffs to assess, said Humphrey of ChinaWhys.

The zombies among us

Though it can be a challenge to approximate the assets or revenues of companies in these industries, it should be possible for research companies with enough boots on the ground to do so. But the same cannot always be said for companies whose services or products are virtual. Extractive industries and pharmaceuticals have been the most public progenitors of fraud thus far; in the future, however, con artists may be more at home in digital industries, where legitimate businesses are difficult to verify.

“Fraudulent businesses that primarily exist in cyberspace, the media or on paper are the toughest to expose,” wrote Moore of AlfredLittle.com. “Recall that no short sellers could ever prove that [bus advertising company] China Media Express was a fraud. However, the company’s auditor finally realized it and resigned.”

Block of Muddy Waters concurred: due to the lack of transparency in the digital out-of-home advertising sector, China Media Express’ fraud might have been sustainable; however, management was too aggressive. “The numbers they claimed to generate were jaw-dropping and implausible to most people who have been in a long-distance bus terminal in China,” said Block.

The public has already seen some high-profile Chinese internet companies censured for inaccurate figures this year. Renren’s IPO was tarnished in April by the revision of a key user figure in its prospectus. Then this fall, Chinese media reported that Sina – the operator of the Weibo microblog, perhaps the most coveted internet territory in all of China – had inadvertently inflated its user numbers. The service was host to tens of millions of “zombie” accounts, which fraudsters were using to spam legitimate Weibo users or create the appearance of enthusiastic followings for some companies or commentators for a small fee.

The company’s zombie problem might have been even bigger than these figures suggested. A report in Guangdong’s Southern Metropolis Daily cited a Weibo entrepreneur who called himself “little hippo” and claimed to run more than 10 million fake accounts with the help of a team of more than 10.

No one knows exactly how many of Sina’s more than 250 million Weibo accounts operators like “little hippo” have fabricated. But one thing is certain: Until the zombies were exposed, Sina had received no shortage of positive press about its stunning growth in users. And that was a primary factor in helping it to earn a market valuation in the b
illions of dollars.

It’s impossible to deny the growth potential in China’s internet and media industries; they are host to some of the fastest-growing companies in the world. Yet exaggerated business scales may be more widespread in these industries than most observers assume. If even China’s most reputable internet companies have been shown to exaggerate their user figures (intentionally or not), what should investors expect from companies with far less scrutiny and transparency?

Many fraudulent companies remain on US exchanges, waiting to be uncovered as soon as stock prices rebound. Humphrey of ChinaWhys said his firm believes that at least half of Chinese companies listed on Nasdaq have question marks in their corporate compliance and that more Sino-Forests remain to be uncovered. Moore of AlfredLittle.com put it more mathematically: His contributors estimate that more than 60% of Chinese companies exaggerate their profits by more than 40% and that more than 80% exaggerate by over 20%.

With such questions plaguing even China’s most legitimate companies, some investors will decide to avoid the lot. But for those who are brave or foolhardy enough to take on these odds, this year’s fraud investigations offer a few guides.

Investors should not buy into another Sino-Forest without counting the trees, nor companies and products they do not understand. Most importantly, investors should choose targets that Chinese people know and trust. After all, those familiar with Sino-Forest’s operations might have predicted its fall long ago.

“Long-time investors in China knew all along that most of these companies were frauds,” said Moore.