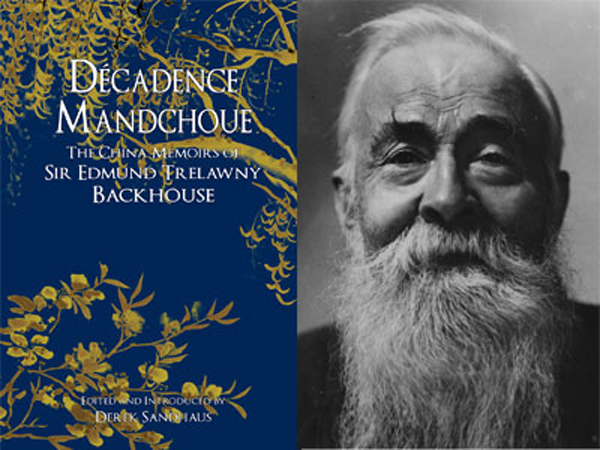 For nearly 70 years, the original manuscript of the memoirs of Sir Edmund Trelawny Backhouse, British baronet, polyglot and libertine, sat unpublished – first in the hands of Reinhard Hoeppli, the Swiss physician who commissioned them, and then with British historian and Backhouse biographer Hugh Trevor-Roper, who eventually left them to the Bodleian Library at Oxford.

The memoirs were long considered unprintable – “a pornographic novelette” said Trevor-Roper, who didn’t stop there: “No verve in the writing can redeem their pathological obscenity … [they are] the last explosion of repressed and distorted sexuality.”

As long as they remained locked within the Bodleian, few could challenge Trevor-Roper’s opinion. Now, thanks to the work of Earnshaw Books Editor Derek Sandhaus, we have Décadence Mandchoue, the second – and thus far the only published – part of Backhouse’s memoirs, covering his time in late Qing dynasty Peking.

Unchaste pleasures
As Trevor-Roper charged, the work may well be pornographic in parts. The first chapter begins with Backhouse walking into a male brothel in Peking and proceeding to detail both the establishment’s offerings and the specifics of his dalliance with his beloved catamite, Cassia Flower.

This is not a book for the prudish, or even for those who prefer tasteful restraint in their erotica; one scene involves consort with a “randy he-goat.” Nevertheless, those who can get past the nature of the content can take pleasure in the unabashed joy – and occasional poetry – in Backhouse’s descriptions, the “verve” to which Trevor-Roper grudgingly admitted. For example, Backhouse on a favored eunuch: “His eyes were luminous: lust and passion radiated from them like twin candles shedding their beams in a naughty world.”

If it were simply the recollections of an aging homosexual debauchée, however, Décadence Mandchoue would be of limited interest. Fortunately, the heart of the book is given over to Backhouse’s extended relationship with the Empress Dowager, Cixi (Tz’u Hsi).

His depictions of the aging regent and tales of intrigue in the imperial court form the narrative structure for these memoirs. They also make up most of the latter part of the book once Backhouse has expended his linguistic strength in relating his various physical congresses.

The relationship with Cixi is also the heart of much of the controversy surrounding this work. While few have raised objections to the notion of a Westerner engaged in pederasty-for-hire at pleasure gardens around the imperial capital, there is understandably more doubt about his claims that he engaged in what he terms commerce sexuel with the “Old Buddha” 150-200 times between 1904 and 1908. He also presents himself as a confidant of, among others, Cixi and her chief eunuch, and writes of the favors requested of him as his influence within the court grew.

Backhouse claims in his foreword that his writings “contain nothing but the truth, the whole truth and the absolute truth.” This is doubtful.

Hoeppli, who knew Backhouse personally, writes that the man’s memory was imperfect: “Whether old age had weakened it, or had allowed his equally extraordinary imagination occasionally to get the better of it, is impossible to decide. It is certain in any case that in some instances which could be checked, his memory was at fault.” Hoeppli, however, declares the work “fundamentally based on facts.”

With few, if any, sources that would be able to verify some of Backhouse’s more fantastic claims, it may be difficult to ever come to any more concrete conclusion – no proof has ever been found, for instance, of the existence of the diaries of Li Lien-ying, the chief eunuch, which Backhouse says would corroborate his descriptions of his meetings with Cixi.

But whether or not it is an accurate recounting of specific historical events – including the death of Cixi in 1908 – Décadence Mandchoue is at its fundament the work of a man with uncommon knowledge of and respect for the inner workings of the Qing court.

This alone makes it difficult to justify Trevor-Roper’s outright dismissal of the text. Setting aside questions of morality and accuracy, there has never been a book about China like this, and there will never be another.