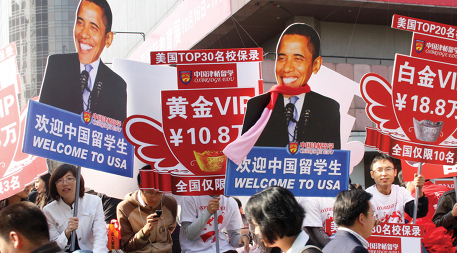 American and Chinese negotiators left the Strategic and Economic Dialogue (SED) in May with broad pledges for cooperation on a range of issues.

As usual, representatives on both sides had to balance appearing tough and diffusing tensions. On the all-important currency issue, US Treasury Secretary Tim Geithner pushed for faster revaluation, but also conceded that inflation has sped renminbi appreciation to about 10% annually – nearly twice the official rate.

Chinese state media predictably downplayed discussions of human rights, focusing instead on the somewhat nebulous promises from the US to relax controls on exports of high-technology products and open more industries to Chinese investment.

However, most of the concrete commitments appeared to come from the Chinese side. Beijing promised to open government procurement to foreign companies and ensure that authorities at all levels use legitimate software. It also made moves towards opening its financial sector, agreeing to allow foreign firms to sell mutual funds and auto insurance, and underwrite corporate bonds. In addition, Beijing will require authorities to make regulations public at least 30 days before they go into effect.

When it came to one of China’s biggest complaints – barriers its firms face in investing – both sides agreed to “foster an open, transparent and predictable investment climate.”

That promise may be difficult to uphold. In the US, lawmakers and constituents continue to depict Chinese enterprises as routinely engaging in corporate and military espionage. Such attitudes in turn discourage Chinese investors.

Some argue that Chinese investment could help relieve the ballooning US-China trade deficit, which hit a record US$273 billion in 2010. Unfortunately, the trade imbalance is a structural issue.

There are other cases for loosening restrictions, however. A new report by the Rhodium Group shows Chinese direct investment in the US more than doubled in 2010 to over US$5 billion, creating some 10,000 jobs to date. China will invest up to US$2 trillion in foreign companies over the next decade. “Japanese investment in the United States during the 1980s was as controversial as China’s,” said the report. “But in the following years, US affiliates of Japanese companies invested hundreds of billions of dollars in the United States, and today employ nearly 700,000 Americans.”

This analogy is a stretch. Japanese investment, while controversial, was not led by enterprises owned by a nominally communist single-party state with a corruption problem. Nor was Japan competing with the US for military influence in the Pacific. The argument over Chinese investment will still be simmering when the next SED rolls around.