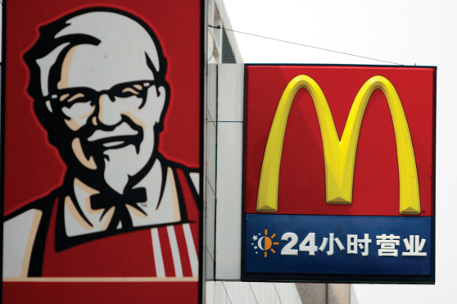 As far as advertisements go, the campaign rolled out at McDonald’s China restaurants in early October was fairly straightforward. “CHINA PRIDE” screamed billboards inside the fast-food chain. The promotion of the month offered patriotic customer a teddy bear in the colors of China’s flag to commemorate the 1949 revolution.

Putting aside the irony of commemorating a communist revolution with marketing collateral from the Golden Arches – a symbol of Americana if there ever was one – the strategy hasn’t hurt McDonald’s at the cash register. This pragmatic attitude toward political ideology goes some way toward explaining how the fast-food retailer managed to become the world’s biggest restaurant chain, with operations in 119 countries and territories. McDonald’s highly efficient business model has led it to dominate the fast-food business in every major market it has entered around the world – except this one.

Despite lackluster performance in the US and European markets, Yum! Brands – which includes KFC and Pizza Hut – has widely outperformed McDonald’s on nearly every measure in China. “They’ve clearly been far, far more successful than McDonald’s in this market, and for many reasons,” said Jing Bing, Beijing-based assistant professor of marketing at Cheung Kong School of Business.

Part of the explanation can be found in fundamental differences in the DNA of the two companies. The same de-centralized structure that hobbled KFC in the US also gave it the agility to adapt quickly to China’s market. In contrast, the rigid, bureaucratic approach of McDonald’s created a juggernaught in America, but hampered its forays into China. However, as the Chinese fast-food market changes, McDonald’s culture may finally begin to pay off at KFC’s expense.

KFC – then a part of PepsiCo’s Tricon Global Restaurants division – opened its first store in Beijing in 1987, a full five years before McDonald’s arrived. The store did very well, serving an average of 9,000 customers each day, and recouped its initial investment in just one year.

This was due more to the sheer novelty of the Western fast-food concept than its finger-lickin’ good recipes (many Chinese people think finger-lickin’ is unhygienic). The first stores were poorly located, and an almost non-existent supply chain meant that food was locally sourced and of poor quality. But they were successful nevertheless. “The basic reason they did so well was because it was the only place 20 years ago where the Chinese could go which had a clean bathroom, air conditioning and sanitation,” said Joel Silverstein, founder of East West Hospitality Group, a restaurant consultancy.

But novelty is not a sustainable competitive advantage, and many experts reckoned KFC in China would soon go the way of KFC in America, taking its place far behind McDonald’s. So how did KFC prove the experts wrong?

“The main reason that Yum became so successful in China is thanks to one man, Sam Su,” said Maiyo Hood, former KFC China supply-chain management director, echoing a sentiment widely held by industry insiders. Su, a Taiwan-born, Wharton-educated marketing manager at Proctor and Gamble was poached to head Tricon Global Restaurants’ China operations. He was given a substantial budget by its parent company, PepsiCo, and almost complete autonomy over its China operations.

‘Go forth and prosper’

KFC’s corporate culture can be traced back to the late 1970s and ‘80s, when PepsiCo went on a buying spree for American restaurant chains, gobbling up Pizza Hut (1977), Taco Bell (1978) and then KFC (1986), among a host of other smaller companies. It merged the restaurants to become part of the conglomerate’s Tricon Global Restaurants, one of three PepsiCo divisions (the others being Pepsi’s beverage and snack foods divisions).

PepsiCo’s acquisition was aimed at making sure these chains were pouring their customers Pepsi, not Coke. But PepsiCo executives were not particularly adept at running fast-food chains. Pepsi’s solution was to de-centralize, a process that eventually led Tricon to be spun off into Yum.

“The reason Tricon had so much autonomy was that it was never run like a restaurant; it was never run from the center. There were no processing systems or directions from corporate; they just did what they wanted,” recalled Hood. “So [in 1997] Roger Enrico, [PepsiCo’s] brilliant CEO, said okay, here’s four billion in debt: Go forth and prosper.”

The highly de-centralized culture allowed Su to run his own fully-funded show. He began by assembling a team made up largely of executives from Taiwan, along with some from ethnic Chinese from Hong Kong and Malaysia – of whom about 80% Hood reckons he plucked from McDonald’s. “[Su’s] vision was to beat McDonald’s at their own game in China,” he said.

The company also localized its food. KFC experimented with tweaking its China menu until it became almost unrecognizable from its US restaurants. The chicken became spicier; rice, congee and egg tarts became popular items.

The final component was the restaurant’s supply chain and distribution network. No credible large, third-party logistics operators, such as Unigroup Logistics, existed in China when KFC entered the market, and unlike McDonald’s – which works in tandem around the world with supply chain company HAVI – KFC had no partner.

This also proved a blessing in disguise. With no need to persuade skeptical partners, Su’s team could easily create a tailor-made system. Using a familiar pattern, it poached HAVI employees to rapidly establish its own supply chain network, create one of China’s most sophisticated refrigerated shipping systems.

The triumph of bureaucracy

In most markets, relying on a system rather than an individual is a good thing. Yet in China, that advantage turned into a liability. The company was not nearly as nimble as the de-centralized KFC, and failure to adapt meant that McDonald’s hit a number of stumbling blocks. Industry insiders point to its initial tendency to set up shop in areas with low traffic and visibility. And despite eventual co-investment with HAVI in China, distribution and logistics got off to a rockier start than KFC, preventing McDonald’s from introducing much lower prices.

RJ Hottovy, director of consumer research at Morningstar who follows both KFC and McDonald’s, points out that distribution inefficiencies had knock-on effects for branding. “I don’t think McDonald’s was positioning itself as upscale in the China market, but it came across that way,” he said. “There was mixed messaging and confusion on the part of the Chinese consumer.”

Moreover, in a highly top-down culture, localization was almost a dirty word. “They [McDonald’s] resist it everywhere,” said Silverstein. “They figure they’ll beat you down eventually and you’ll give up and accept them.” He compared McDonald’s to Starbucks’ experience in Australia – a tale of caution often cited among Asia’s restaurant industry cognoscenti. The ubiquitous US chain marched its
standard-issue coffee model into Australia, with the aim of pummeling its way to market dominance via an aggressive expansion. However, it failed to crush Australia’s legions of boutique coffee shops, which catered to the nation’s refined taste buds. Eight years later, the exasperated giant closed three-quarters of its outlets in the country – choosing to exit the market entirely rather than change its product.

KFC had an undeniably better beginning in China than McDonald’s, but both companies have had their share of problems. Lack of franchising meant that both parent companies had to stump up big capital investments right out of the gate, and even KFC considered scaling back in the mid-1990s. Yet take-off did eventually occur in the early 2000s for KFC; now it may be McDonald’s time.

Hottovy of Morningstar points out that McDonald’s has made great strides in the past few years: It is fiercely re-modeling its stores, improving its location selection and localizing its menu – though still to a lesser extent than KFC.

McDonald’s has also perfected the art of piggybacking KFC into new markets. “When KFC enters a new city – say, a lower-tier inland city – McDonald’s will figure that it’s a city with potential,” said Shen Qiaowei, assistant marketing professor at the University of Pennsylvania’s Wharton School of Business, who studies how KFC and McDonald’s expand. “There are so many potential markets for them that they have to prioritize. It’s a little like free-riding on KFC’s market research.”

Shen adds that KFC also helps “educate consumers” about Western fast food. This may bear out McDonald’s refusal to fully localize its menu – the strategy has succeeded in Hong Kong and Taiwan, where locals have grown accustomed to the taste of Western fast food.

The sum of these parts is that after nearly two decades in China, McDonald’s is finally gaining traction. “It lost money for a long time, but now McDonald’s has found its mojo and is blowing it out in China,” said Silverstein. “It’s not necessarily true that KFC will be more successful than McDonald’s 10 years from now. McDonald’s may reverse the situation – as they’ve done pretty much everywhere else in the world.”

Yet Yum is not resting on its laurels. With 4,200 locations in China (including Pizza Hut), the brand plans to open another 600 restaurants this year. “Yum has built an amazing machine in China,” said Hood. “The process, systems, decision-making, brand strength and so on … It would be really difficult to overtake.” And Yum has more at stake: China accounts for over 40% of its profits, compared to a piffling 3% for McDonald’s.

There is also the issue of domestic competitors. None have yet found the muscle to compete with American fast-food retailers, but Silverstein points out that this is natural: As the country grows wealthier and its domestic players become more mature, local rivals are bound to emerge and eat up market share, just as they did in Japan, South Korea, Taiwan and Hong Kong.

For now, China’s fast-food market is rapidly becoming more competitive. Yum may have gotten a second lease on life in China, but the smaller margin for error that comes with maturing markets may force it to become more standardized and more centralized, relying less on brilliant executives and more on a brilliant machine. Put differently, the outcome of the battle for the fast-food market in China may depend on how well Yum can become more like McDonald’s.