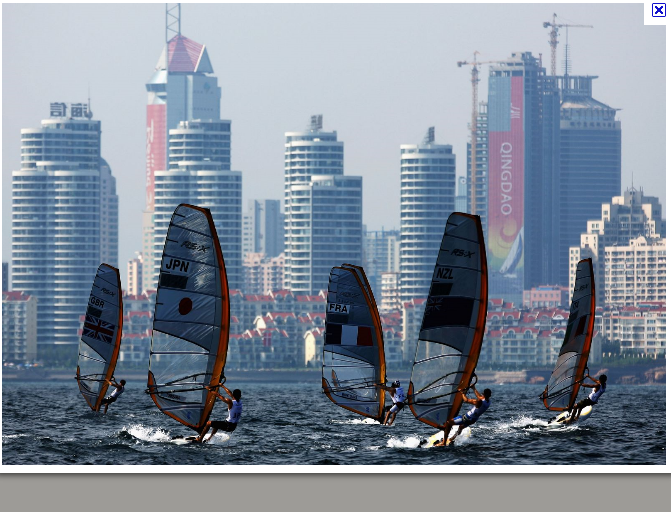 With its proximity to Japan and Korea, and its German colonial roots, Qingdao has been a magnet for foreign investment since the late 1970s. In recent years, the city has played on its strengths even more – attracting increased attention from abroad with significant developments in tourism and its port facilities.

“Right now, you see more companies opening offices in Qingdao. There’s more investment from abroad,” said Christopher Liptau, manager of the US and European division at Brighture, an accounting firm in Qingdao. “There are new opportunities for local workers, especially with white-collar jobs.”

Some credit Qingdao’s recent growth to the exposure it gained from hosting the 2008 Summer Olympics sailing competition.
Since then, the marina has been expanded further: The coastal city in Shandong province secured a spot as one of the starting points in the 2009 Volvo Ocean Race and will host the International Sailing Federation’s Extreme Sailing Series this month.

Gerd Burkard, co-founder and general manager of Ger-Lin Consulting, a consulting firm that works with small- and medium-sized companies in Qingdao, argues that fostering a sailing culture not only helps tourism, but will also bring new business opportunities.

“At first, the marina was empty after the [Olympics],” Burkard said. “But now it has filled up quite a lot. That is also because the industry is growing.

“It will bring investors, factories that build ships and equipment, and services like designing boats. It’s not going to explode in the next one or two years, but it is growing.”

To and fro
While Qingdao is looking to become a hub for tourists and sailing enthusiasts, it is also seeking to transform itself into a regional shipping center by outshining Chinese ports like Tianjin, Yantai and Dalian, as well as South Korea’s Busan.

Over the next five years, Qingdao Port plans to add 300 million tons of capacity to boost throughput to 600 million tons and 20 million TEUs (20-foot equivalent units) of containers. Currently 10.56 square kilometers, the port has been overloaded for some time, handling more than the 150-million-ton maximum capacity it was designed for.

The port will invest US$4.6 billion in the dock expansion, and the money will also be used to introduce new technologies and restructure work processes.

“[Qingdao Port] is a good stop for shipping routes originating in Japan or Korea,” Liptau said. “Ships don’t have to pass through the bay to get to Tianjin, which is further west of Qingdao and more enclosed.”

The city’s well-developed infrastructure has also helped bring more business activity to the port. Thanks to its rail connections to China’s western industrial cities – from which coal and minerals are transported – the port has become a processing and shipping center for raw materials. Indeed, Qingdao is now home to the world’s largest iron ore port and also China’s largest import port for crude oil.

By 2015, Qingdao Port will have four areas: a shipping and storage center of bulk cargo and energy; a container shipping hub for Northeast Asia; an oil and chemical logistics hub; and the old port will handle grains, chemical fertilizer, steel, aluminum, equipment, cold chain shipping containers and feedstuff.

Investor support
Another sign of Qingdao’s strengthening economy is the growth of overseas investment in the city. According to the Qingdao Bureau of Commerce, in the first three quarters of 2010,  foreign investment reached US$3.2 billion, a 221.7 % increase from 2009.

Li Qiang, a Qingdao-based partner at King & Wood law firm, said the city has benefited from having government officials dedicated to sourcing and serving foreign investors. Responsibilities are divided between a commercial department that helps facilitate investment and a promotional department that is responsible for attracting investors. Separating these tasks and delegating them to different departments boosts efficiency, Li said.

The government also provides substantial support for established foreign companies in Qingdao. “There’s always a contact person in case something goes wrong, and if [foreign companies] need help or information, they can always turn to the government,” Liptau said.