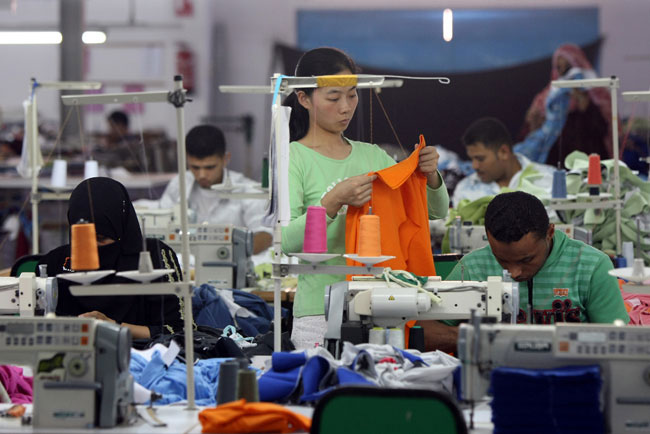 The free trade agreement between China and six members of the Association of Southeast Asian Nations (ASEAN), which came into effect at the beginning of this year, was celebrated in some quarters and mourned in others. Lowering trade barriers may be good for the regional economy in general, but in Indonesian factory dormitories the greater good gives cold comfort. The treaty eliminates tariffs on about 90% of imported goods between signatory countries; many Indonesians reasonably fear their country’s textile, furniture and electronic industries will drown beneath a fresh tidal wave of cheap Chinese imports.

Indonesian textile manufacturers in particular were so concerned that they lobbied the Indonesian Textile Association (API), which in turn begged the Indonesian government to delay implementation of the China-ASEAN Free Trade Agreement (CAFTA).

Ade Sudrajat, then-deputy chairman of the group, predicted that a trade war could break out between China and Indonesia if local textile producers pushed Jakarta to impose anti-dumping duties on low-priced Chinese textiles, and Beijing retaliated with trade barriers on Indonesian shrimp.

The pact wasn’t delayed, a trade war didn’t erupt and Indonesia saw an initial bump in revenues from increased exports in 2010. A year later, however, Indonesia is still worried about the impact CAFTA will have on its economy. While parts of the Indonesian textile industry are doing better than ever before, others certainly have cause for concern.

The agreement triggered a surge in trade, but also a big increase in Indonesia’s trade deficit with China. According to the Indonesian Trade Ministry, revenue from non-oil and gas exports to China reached US$14.1 billion in 2010 – up 58% from 2009. However, non-oil and gas imports from China rose to US$19.7 billion, creating a US$5.6 billion trade deficit, US$1 billion more than in 2009.

Uncomfortable clothing
The textile industry shows an even greater imbalance. According to API, Indonesia exported US$180 million in textile and textile products to China in 2009, compared to a whopping US$1 billion in imports from China. After CAFTA came into effect, Indonesian textile exports to China rose to US$300 million in 2010 – a 67% increase over the previous year – but imports spiked to nearly US$1.7 billion. The US$1.4 billion deficit represented a 61% rise from the previous year.

“The industry of woven fabrics and knits is not faring well at all in Indonesia because of the flood of goods from China,” said Sudrajat, who is now chairman of API. “Some factories have closed down because they cannot compete with Chinese fabrics … In the last three years, many people haven’t replaced machinery in factories here because they are so hopeless they [can] compete with Chinese manufacturers.”

In 2009, China’s textile and garment exports fell by about 10% year-on-year as demand declined sharply, the renminbi appreciated against the dollar and labor and production costs perversely continued to rise. The slowdown alarmed Beijing to such an extent that it enacted a series of measures to keep the sector afloat, approving tax credits and rebates and forcing banks to give factory owners low-interest loans.

The measures were effective, and the country’s garment manufacturing sector enjoyed remarkable growth in 2010, helping the Chinese textile industry post an all-time high for export volume at US$226 billion – a 23% increase from 2009, according to the China National Textile and Apparel Council. Garment exports to the US and Europe rose by 27% and 24%, respectively, while exports to ASEAN countries climbed by 36%.

Looking south
The experience caused Beijing to take another look at Southeast Asia and conclude that emerging markets like Indonesia could prove key to protecting the industry in the future, both as outsourcing destinations and sources of consumer demand.

China exports mostly finished garments to the US, Japan and Europe and raw materials and semi-finished products to Southeast Asia, meaning Southeast Asian firms are both competitors and partners with Chinese producers. With the treaty now in place, some Chinese manufacturers are also increasingly looking at moving their factories to Southeast Asia, and in particular Indonesia, where wages are lower, raw materials are widely available and the political situation is relatively stable. According to a report in  Indonesia Finance Today published in February this year, 15 Chinese textile companies have already reserved 200 hectares of land to relocate their plants to Indonesia, at a cost of nearly US$580 million in the second quarter of 2011.

“We invite them to come here, we’d love for them to come!” Sudrajat said emphatically. “The important thing is they can employ more Indonesian workers.” Other Chinese textile makers will likely follow, he added, if the Indonesian government can ensure the proper infrastructure will be in place to keep them from preferring other Southeast Asian nations, such as Vietnam – where 90 Chinese factories relocated last year.

Vietnam’s advantage over Indonesia stems in part from the relatively superior planning and management of its industrial zones, which have an assured supply of electricity and water, as well as adequate access to roads, telephone lines and sewer systems. Sudrajat said Chinese companies usually want to cluster all of their plants in such zones.

“Chinese clothing factories began moving to where they believe the investment climate is good, policy is encouraging, labor costs are cheap, and to where they believe they can make money,” said Zhao Hong, deputy director of the International Trade Office at the China National Textile and Apparel Council. “As businessmen, they naturally think so. Always keep it in mind that capital is greedy in nature, it flows into where a good return is expected and achieved.”

Bad memories
The Indonesian government is trying to become even more competitive by offering financial incentives to bring in investors, such as exempting import duties on machinery and raw materials for two years. But even if the regulatory environment is sweetened, it may not be enough to attract some Chinese firms.

One major impediment is more social than business-related: Chinese investors are still worried about perceived anti-Chinese sentiment in Indonesia. Zhao said many Chinese still remember the murderous anti-Chinese riots that broke out in Indonesia in May 1998 in the wake of the collapse of the rupiah during the Asian financial crisis. Thousands of Chinese fled the country after the riots; ethnic tensions in the country remain evident.

“We don’t have a lot of information about [the investment environment in] Indonesia. We have it from Bangladesh, the Philippines and Thailand, but not from Indonesia,” he said. “I don’t feel the relationship is so strong. Chinese people think it’s not safe there.”

Fragmenting fabrics
Analysts say other factors make it difficult for Indonesia to be able to compete with Chinese imports or attract foreign investment. A labor law was passed in 2003 that requires employers to pay large sums of severance pay to workers who are fired, leading the World Bank to rank Indonesia as the sixth most expensive country to fire an employee. An attempt to change the law in 2006 was thwarted by Indonesian unions.

Domestic trade restrictions also make it difficult to ship goods around the country, said Aris Ananta, a senior research fellow at the Institute of Southeast Asian Studies in Singapore.

As import
s from China continue to rise, more protectionist policies could also be on the way. In late March, for instance, the Ministry of Trade imposed a safeguard duty of US$13 per kilogram on all imported woven cotton fabric imports for the next three years, according to API.

A government survey earlier this year concluded that China had dumped nearly 40 different products in Indonesia since CAFTA had come into force, prompting Hatta Radjasa, coordinating minister for economic affairs, to tell The Jakarta Post that the agreement could be re-evaluated if unfair trade practices continue.

Still, Sudrajat notes there have been some bright spots for the Indonesian textile industry. The China-ASEAN Business Council, a body set up in 2001 to facilitate trade between the two sides, has offered to help Indonesian manufacturers enter the Chinese market.

“They’ve provided us with help participating in local and provincial exhibitions in the western part of the country, which doesn’t have a textile industry,” he said. “We can compete with the Chinese industry in these areas; we can introduce our production and designs.”

To each his own
The fiber and yarn sectors are also doing well, with exports to China up by about 65% in 2010, API says.

Zhao of the China Knitting Industry Association noted that China has a huge demand for chemical fibers in particular. “Indonesia is strong in chemical fibers or raw materials for chemical fibers. China needs more innovative, high-functional and high-performance fibers and yarns to make its own products more competitive at a cutting-edge level.”

Such specialization is part of the treaty’s impact. Rather than a wholesale shift of manufacturing to or from China, the industry is fragmenting and settling into niche production markets based on comparative advantages like the cost of labor, infrastructure and regulation.

“Overall, the free-trade agreement is good,” said Sudrajat. “It means more job creation for both countries because we complement each other – in some sectors we are weak, in some sectors China is weak.”

Win-win or win-lose, Chinese competition could also be motivation for Indonesia to up its game, he added.

“The Indonesian factories, they should learn from China how to do more ambitious work.”