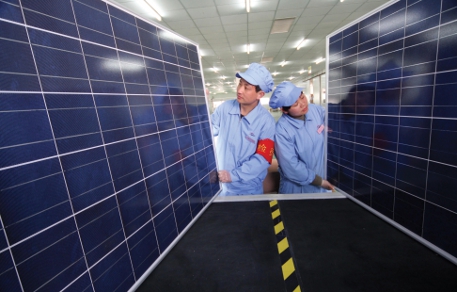 Ten years ago, China and solar rarely appeared in the same sentence; the country seemed content to burn its ample coal reserves and watch smog accrue. But then, someone in the halls of government realized solar power could both enhance China’s energy security and create a brand new and politically hip export industry. Within just a few years, the government, using a judicious mixture of subsidies, easy loans and policy support, had successfully incubated some of the world’s largest and most successful solar power equipment manufacturers, including Suntech, Yingli Green Energy and LDK Solar. Today the country produces nearly half of the world’s solar cells.

The dramatic leap forward was certainly a feather in China’s clean technology cap. But that feather has been looking rather bedraggled of late. So long as clean technology enjoyed strong policy support and cheap labor helped mainland companies outbid foreign competitors, the Chinese solar sector had plenty of customers. But then the financial crisis turned the market on its head. Governments in Europe, which buys two-thirds of world’s solar products, began scaling back their support, leaving companies with lower revenues and fiercer competition for contracts. Having hogged the market, it appears that Chinese companies have also hogged the risks.

The European customer, the longtime financier of the Chinese solar industry, is looking a lot more impoverished these days. The economic downturn dampened popular enthusiasm in Europe for renewable energy, and the unfolding debt crisis has only made matters worse. Germany and Italy, the world’s largest markets for solar products, wound down their subsidy programs this year. Other markets like the US and Japan have stepped into the gap. But given ongoing uncertainty about economic recoveries in these markets, banking on the sustainability of that demand seems risky.

“The [sector] has not attracted long-term investors within the last year or two because being positive on these companies requires one to be positive on support mechanisms for solar energy around the world,” said Jesse Pichel, global head of clean tech research at Jefferies. “Investor sentiment is so negative around government budgets.”

For Chinese companies, this slowdown has been aggravated by overcapacity throughout the solar supply chain. Thanks to a rapid ramp-up in domestic mining and processing, China now has a glut of polysilicon, the raw ingredient of most solar cells. Cheaper raw material prices might seem to be a good thing for downstream manufacturers; however, tough competition in the industry means that savings on raw materials are largely passed through the product chain to the end consumers, rather than padding company balance sheets. Meanwhile, the rising cost of labor is squeezing margins.

Pichel said a culling is gradually getting underway. “In the past, all Chinese companies had to do was be cheaper than the Germans. Now the Germans are just about dead, and the Chinese are competing among themselves … There are a lot of cowboys out there without the scale or cost structure to compete.”

Run of the bears

These trends have triggered a sharp drop in the share prices of listed Chinese solar companies, with most industry leaders losing half their value since the beginning of the year. Short-sellers have jumped on the bandwagon – Jim Chanos urged investors “to cross over to the dark side” in May – further depressing valuations.

Some investors see this as a buying opportunity, but most companies are still deep in the woods. Analysts expect the recent decline in the price of solar products to trigger an increase in new installations before the end of the year, but any recovery should be muted. “The rumblings from the recent Intersolar conference in Munich suggest that though demand is slowly improving, it is nowhere near enough to stop further pricing declines,” wrote Stephen Simko, an analyst at Morningstar.

If prices keep falling, even Chinese companies, the world’s lowest-cost manufacturers, may begin to falter. Citigroup analyst Timothy Arcuri said that China is seeing its cost advantage erode due to the global glut of cheap raw materials. “Chinese companies have been able to leverage cheap polysilicon … But that game is sort of over. The costs now are pretty much even for everyone.”

As a result, solar companies must turn to innovation and economies of scale to stay competitive. In this respect, China may hold some success stories: Trina, Yingli and JA Solar are known for having globally competitive technology, while Suntech, the world’s biggest maker of solar panels, certainly benefits from an economy of scale. These companies also have reputations for making high-quality products – a vital factor in an industry where the product must last for decades.

Advantages like these will undoubtedly help players outlast any coming shakeout. But in a state-dominated market like solar, government support may yet be the deciding factor. LDK Solar, for example, has teetered on the edge of insolvency and wrestled with numerous shareholder lawsuits over the years. Yet it continues to thrive, due largely to generous financing from Jiangxi province.

In the next few years, Chinese companies may turn to domestic markets not just for financial support but also for sales. China is likely raise its targets for photovoltaic installations to 10 gigawatts by 2015, and then quadruple that amount to 50GW by 2020. If Chinese firms can use the downturn to consolidate, integrate and upgrade their technology, they will be well-positioned when their own domestic market starts to bloom.