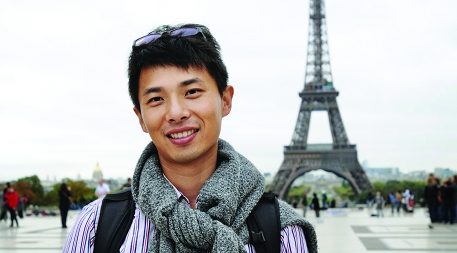 Jerome Fu was working in legal and internal auditing at Hong Kong-listed Heng Tia Group when he decided to make a career change. To achieve his goal of working for a top international luxury brand, the Shanghai native decided to pursue an MBA degree at the Reims School of Management in France.

“I wanted to know more about luxury and France is the country of luxury. I like the lifestyle and food here. In fact, I’ve liked France ever since I arrived,”  Fu said.

Fu is just one of a growing number of Chinese students who are choosing to study in France over traditional powerhouse business schools in the US or UK. According to the Graduate Management Admissions Council, a non-profit organization of business schools, 2,531 Chinese applicants sent their GMAT scores to French MBA schools in 2010 – a stunning 126% increase from 2006.

Chinese students make up the second largest foreign nationality in French business schools, just behind Indian students. According to Anthony Chaumuzeau, cultural counselor of the French embassy in China, the overall number of Chinese university students studying in France could reach 50,000 by 2015. In 1999, there were only 2,000.

“In particular, we have developed a series of long-term partnerships with leading Chinese academic institutions. For example, HEC Paris has teamed up with Tsinghua University and the Chinese University of Hong Kong to create MBA double degrees.”

The reasons for the growing attractiveness of French MBA programs begin with the large quantity of excellent schools to choose from: EDHEC Business School, EM Lyon Business School, ESSEC Business School and Reims Management School all have MBA programs with rising international reputations. The crème de la crème, INSEAD and HEC, have also cracked the world’s top 10 lists for business schools in the Economist and Financial Times. Among European countries, France comes second only to the UK in both the number of globally-ranked business schools and the number of international MBA student enrolments.

The diverse makeup of students at French MBA schools is a selling point for many Chinese students who seek a global network of colleagues and alumni. International students account for about 80% of MBA programs in France. At INSEAD, the 2010 graduating class consisted of students from 90 different countries, with no nationality accounting for more than 10% of the class.

Not only are there students from every corner of the globe in French schools, but Chinese students also notice a difference in teaching styles, compared with domestic business schools.

“In Western countries, the focus is on the students’ education and developing their way of thinking, and teaching them how to study by themselves,” said Yun Li, who graduated from Reims in 2010.

Some students seek more specialized skills from France. While China is already the largest market for Louis Vuitton, accounting for 15% of the French fashion house’s global sales, more Chinese students are also flocking to France’s business schools that offer luxury management training. A course jointly offered by the School of Economics and Management of Tsinghua University, L’Institut Français de la Mode, and HEC Paris teaches management in luxury and fashion, and was  launched in Beijing in 2006.

And apart from Chanel and Dior, France’s location at the heart of Europe offers several leisure and lifestyle benefits. “I like Europe. I visited Germany, the Netherlands, eastern Europe and to the south of France,” said Fu of Reims. “In Europe, I have more chances to travel. And you know, every country is different. I really enjoy the life here.”

A number of practical factors have also boosted French business schools’ appeal. The shorter duration of French MBA programs offers some flexibility to students who cannot take a two-year hiatus from their careers. While full-time MBA programs in the US last for at least 24 months, French MBAs typically require 12-16 months.

French business schools also collaborate closely with the government and private sector to provide generous scholarship terms and opportunities. “I got a scholarship from my school, and also, if a Chinese student is qualified, he or she can apply for the French government scholarship,” Fu said. INSEAD, for example, provides US$3.6 million in scholarships each year so that 17% of the students financed their tuition directly through INSEAD funding.

Ultimately, the coup de grace for many Chinese students weighing their options is simply the cost. While top full-time MBA programs like HEC cost US$65,780, an MBA costs US$106,000 at Harvard Business School and US$88,455 at the London School of Economics. Other business schools in France are even cheaper, with tuition at US$48,966 and US$36,542 at Reims and EM Lyon, respectively.

Despite these advantages, studying in France is not without  its own set of challenges. Juan Zhang, a student at HEC who is set to graduate this year, recommends that students who are not admitted to top-ranked French MBA programs should think twice.

“To be honest, French MBAs are not so popular in China right now,” she said. “Chinese students need to be careful. In terms of general education, the US is better because they have programs that are more well-known around the world and in China.”

“If I had to make a suggestion to people who are making a decision on whether to [study in] France, it would be to have a basic knowledge of French before going there.”