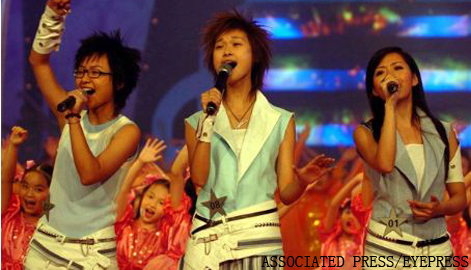 This week in China: Of Chinese bondage; moralizing entertainment

As clouds gather over the balance sheets of Chinese banks, investors are clearly beginning to question whether China is, in fact, much better off than Portugal. Credit default swaps for Chinese debt are higher than those for Europe, and profit growth at Bank of China and AgBank has slowed as nervous bank managers have begun to bury cash reserves under the roots of trees. But Beijing has clearly found a solution, and that solution is … more bond issuance, and damn the yields. This week, China’s insurance regulators announced that they would deal with the problem of insolvent insurers (many of whom parked their capital in Chinese stock markets, which are down around 16% year-to-date) by allowing them to issue ”dim sum” bonds in Hong Kong. Meanwhile, Chinese local governments will also shore up their balances by issuing bonds directly; the cash raised from the suckers – ahem! – from the investors who buy these bonds will be used to pay off bank loans. Local government finances, sorted! This will in turn free up capital at the banks to lend to struggling Chinese small businesses. And Bank of China has just taken the lead in dim sum bond issuance from HSBC, so the profits from all these debt sales stay in the family.

Of course, the only sticking point is who will ultimately buy these bonds. If foreign investors demand yields commensurate with their perception of risk, which appears to be high at present, these bonds are going to prove an expensive way to balance the books. The alternative is sticking with the old playbook and selling the bonds back to the state-owned banks, making bond issuance a de-facto form of bank lending. I know what you’re thinking, but there are some advantages to this system. For one thing, bond issuances are public and therefore easier to audit than loans, many of which have clearly caught Beijing by surprise. And at present it appears that some foreign investors are overcoming their concerns about default risk by thinking of all the currency hedging they can do with renminbi-denominated bonds. But even so, such appetites are satiable, and foisting bad debt onto bondholders is no long-term solution, especially when state-owned banks own the bonds.

This week the cultural conservatives struck a decisive blow to Chinese culture by requiring Chinese television stations to stop broadcasting so much vulgarity and replace it with high quality programming that advances high culture, morality and correct understanding of politics and history as of next year. To serve as an example, the State Administration of Radio, Film and Television has created its own pilot TV series to replace the canceled “Super Girl”, called “Ubercrats,” in which paper pushers from various local bureaus compete for plum jobs in Beijing by obfuscating budgets, juggling mistresses and chain-smoking.

The producers of “Super Girl” might take exception at being called part of “the dark and gloomy side of society,” and they are right to be confused. The regulators want to replace game shows, talent shows and reality shows with news (news must take up two hours of the last six hours of the broadcast day), but unless the definition of news is to be radically revised, those two hours are likely to prove far more distressing to viewers than gang-dancing starlets or materialistic dating shows. Take, for example, the new source of social instability: declining house prices. House investors in Shanghai took to the streets this week when they discovered that the value of speculative investments in new housing developments could, in fact, go down as well as up. They may not yet have fully absorbed that fact; a group of 200 besieged the office of one developer, demanding refunds after the developer cut prices by 30%, the cheeky sod. “The loss we are suffering now is too great for us to afford,” said one protestor. Reminds us of the Le Monde headline on 9-11: “We are all Americans now.”

It is possible that SARFT is genuinely concerned that Chinese brains are being rotted by prurient pap. It is also possible that they are trying to justify their jobs. In the halcyon days of eternal revolution, when Chinese everywhere were passionately debating where the correct political line should be drawn, it was necessary for the Party to provide guidance, especially since the damn line kept moving around. But a significant cohort in this new generation appears to be composed of apathetic materialists who are uninterested in political thought itself. That said, they are not apathetic to their own interests, and nothing on television will distract them from a 30% loss in the value of their primary investment asset.