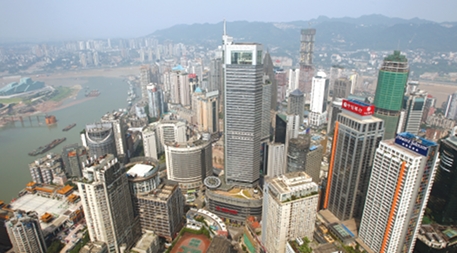 International media were abuzz earlier this year with reports that China was combining nine existing cities in the Pearl River Delta into the world’s biggest metropolitan area. Spanning 40,000 square kilometers and a population of 42 million, the land size – joining Guangzhou, Shenzhen, Dongguan and six smaller cities – would have been as big as Switzerland.

Too bad it isn’t true. Officials promptly responded, saying the reports on the ambitious urbanization project “were totally false.”

“I can only say that Guangdong province is improving integration of infrastructure, industries, urban-rural planning, environmental protection and basic public services in the delta region,” said Guo Yuewen, a spokesman for the Guangdong Provincial Committee, at a news conference in January.

The fact remains, however, that China’s rapid urbanization poses significant environmental and economic dilemmas. According to McKinsey & Company, approximately 350 million people will be added to cities over the next 15 years – 240 million of whom will be migrants. By 2030, the country hopes to achieve a national urbanization rate of 70%.

To make way for this growth –  by creating economic hubs and mitigating stresses on resources – some experts argue that building mega cities is a viable strategy. With about 46% of the population currently living in urban areas, it’s not surprising that China is already home to seven mega cities – including Beijing, Shanghai and Chongqing.

But developing new, big cities successfully is no easy task. The challenges are not just solving physical, urban planning problems – but making changes in terms of political mindsets and policies to support changing demographics.

Experts say mega cities may help China address issues including a high population density as well as land and water scarcity. But in order to reach its full potential in efficiency, Sean Chiao, China executive vice president of
AECOM, an engineering and design firm, argues that mega cities must be planned in an integrated way – rather than left to grow organically.

“Integrated planning means that different departments are not left to do their own thing. For example, infrastructure in China is now often designed separately from architecture, and sustainability is not considered from the beginning,” Chiao said. “In many existing cities, the approach has been to build things separately and then fill in the gaps. There is so much more room to increase efficiency.”

For example, mass transportation could be greener if linked to bike lanes or public pedestrian areas. Chiao also stressed the importance of integrating public space into urban development and careful
financial management of expensive mass transit such as subways.

The big opportunity for emerging cities is to redress China’s concentration of population on the eastern seaboard with the creation of new urban areas in inland regions. And because they are being built from scratch, there is a chance to integrate sustainable practices into city planning early on.

Dutch architect Daan Roggeveen has traveled China’s central and western provinces for the past two years, co-researching a book that documents growth in up-and-coming urban centers. The team has visited 16 cities with populations of more than 1 million – several of which are due to become mega cities in the future, including Wuhan, Chengdu and Xi’an.

A large issue with China’s 60 planned eco-cities – including places like Guiyang – is that green requirements are often based on basic measures, such as moving polluting factories out of downtown cores. Roggeveen added that in the poorer interior, local governments with low budgets face a tussle with developers who have their eye on making immediate profits.

“Because there is the basic need to pull people out of poverty, governments cannot make the choice. They say they have to develop and go green at the same time. However, we haven’t seen evidence of truly green cities yet,” Roggeveen said.

The country’s political structure has also led to inefficiencies in urban planning: Governments are trying to build  big cities, but people aren’t flocking to them yet.

“Development in the interior is very different from that on the east coast. It’s even more top-down. They first build the physical city and then wait for it to fill up with business, residents and culture,” Roggeveen explained.

Part of the reason is that many people who are moving to emerging, inland cities are from rural areas and cannot afford the new residences. Local property markets are driven by speculation so many buildings stand empty.

One example is Zhengzhou New District in the capital of Henan province, where there isn’t enough being done in terms of helping people find work and promoting a higher quality of life, Chiao said. Establishing social infrastructure with jobs and supporting the growth of attractive retail businesses mixed into residential areas is the key.

“The big questions of urbanization are the hukou system, social housing and real estate prices,” said Roggeveen. “The hukou system determines whether migrants can stay in the new city or if they go back. Then the problem of where they will live is determined by whether they can afford real estate prices. This is mostly not the case, so social housing will need to be provided.”

This is especially necessary for low-income individuals, who make up the bulk of the urbanizing population. However, local leaders often focus on promoting fast and visible modernization in order to attract foreign investment and to propel themselves up the political ladder. This mindset won’t push leaders to strive for multi-disciplinary planning, which requires “smart thinking and long term vision,” Chiao said.

“Mega cities can be more efficient but only if we plan it to run smoothly. Right now, we’re not doing it this way.”