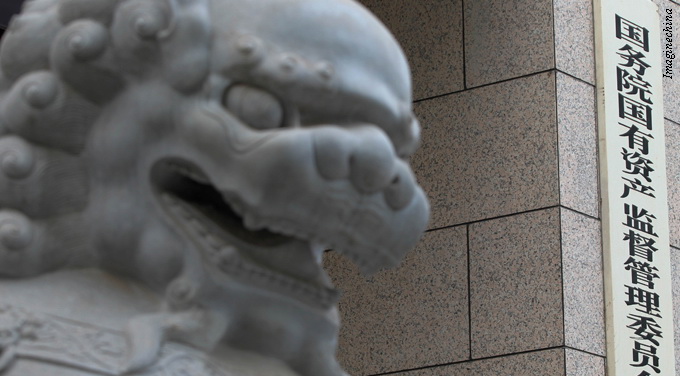 Talk of reform is everywhere in China. Signs that it’s actually taking hold are harder to come by.

A shakeup of China’s state-owned enterprises has been on the cards for years. As of late, pressure for change has intensified, with official media calling for reform that would invigorate the economy.

Inefficient, highly polluting and slow to respond to the market, these vestiges of the planned economy still dominate protected industries such as energy and telecoms. Their contribution to the Chinese economy, however, is limited. The firms drain the market of capital, starving more efficient private companies that lead job creation of financing. They’re also inseparably connected with political forces in Beijing. Checking the power of SOEs, despite promises from leaders to do so, seems unlikely.

Tony Hsu, president of hedge fund Dalton Investments’ research office in Shanghai, is betting that the share price of SOEs will underperform the broader market index. The Los Angeles-based company, which has US$2.3 billion in funds under management, short sells select state enterprises on the belief that large-scale reform of SOEs will be slow to take hold and the conflicts of interest between SOE leaders and state officials will negatively impact shareholder value.

Hsu, an adjunct professor at China European International Business School in Shanghai and at National Taiwan University, took questions from China Economic Review last week. He said some SOEs are prime candidates for shorting because the alignment of interests is generally poor and SOE executives typically have very little ownership of the companies they run and lack interest in increasing shareholder value.

Please tell me briefly what separates Dalton Investments from other investment management firms that operate on the mainland?

Long-term, value oriented investing is something you are unlikely to find in Asia, particularly in China. Most of our competitors on the mainland have a much shorter investment horizon. They want to do well today or tomorrow, or at worst, this week. We believe equities are long-duration assets and we have a much longer holding period – in some cases between five to seven years.

Would you tell me about your investment strategies, specifically those related to China’s state-owned enterprises?

In China, our short positions are mostly comprised of state-owned enterprises, where the senior executives tend to be either former politicians or have some political ties and have been put into these management roles by the state. The executives of the state-run companies typically have a different set of motivations than entrepreneur-led companies and in many cases, are just following orders from the government. The result is that they generally have no ownership in the companies they run and don’t put too much emphasis on increasing shareholder value. Some SOEs have been told by the government to maintain employment in the state, some have been told to grow the size of the company at any cost, some have even been asked to expand outside their core business into unrelated markets. Whatever the particular situation, the interests of SOEs are often more closely aligned with state officials than with shareholders.

Could you tell us any more about the process of shorting SOEs?

There are many China SOEs that are cross-listed on both the Shanghai Stock Exchange as well as the Hong Kong Stock Exchange. On the domestic A-share market, the short selling of individual securities is heavily restricted and the borrowing costs are prohibitively high. Instead, we prefer to short sell H-shares listed in Hong Kong, where short selling is less restrictive. There is an abundance of publicly traded SOEs, not only in China but across Asia.

How long have you been watching the behavior of SOEs? And what kinds of changes have you seen during that time?

We have been studying the movements of SOEs since the government in China began the process of privatization in 1994. While the composition of SOEs has changed over time, we believe that their behavior is largely the same. Progress has come slowly as real change would have involved large-scale layoffs, which the SOE executives, many of whom were Communist Party officials, were not eager to implement. Over time, the number of SOEs was indeed reduced, but the central government preserved the largest SOEs and actually allowed them to grow bigger. More recently, we have been observing the trend of SOEs being pressured by the state to acquire assets abroad at large premiums to market value – this has burdened their balance sheets with a significant amount of goodwill. Last year, China’s outward direct investment reached nearly $80 billion, more than 90% of which originated from SOEs. Sadly for shareholders, while the asset base of SOEs has doubled over the past five years, SOEs’ profits have grown by less than 15%.

There’s constant talk of reform in the media. That’s reform in the financial sector, for environmental protection and land use rights. You name it, there’s probably a story in the Chinese press about it being reformed. How would you characterize reform in China today?

We have witnessed some notable reforms this year, such as the easing of restrictions on bank lending rates as well as a reduction in taxes for small and medium-sized businesses. These changes have been encouraging for investors and supports the notion that the intent to reform is genuine, not just rhetoric. Over the past 60 years, China has undergone periods of transformation that were mainly focused on economic reform and opening up the country to the outside world. This has led to historic economic growth but has also created political, social and economic imbalances that now need to be addressed by China’s leaders. The problems today appear to be broader, deeper and more inward in nature.

What can you tell me about the new leadership’s commitment to reforming SOEs? It doesn’t sound like you have much confidence in this.

We believe the leadership would like to see SOE reform take hold but large-scale reform may take longer than expected. Amongst SOEs, it is not uncommon for executives to have held government posts, or the other way around. The alliance between SOE leadership and state-officials is one that is fraught with conflicts of interest. The real problem is not one of commitment but of how to change the incentive structure at the company level. State-directed mandates, such as maintaining employment [in state firms], negatively impact profitability and suggest that SOEs are being run for reasons other than economic ones. SOE executives typically have very little of their personal wealth tied to their company’s shares and are thus less incentivized to increase shareholder value.