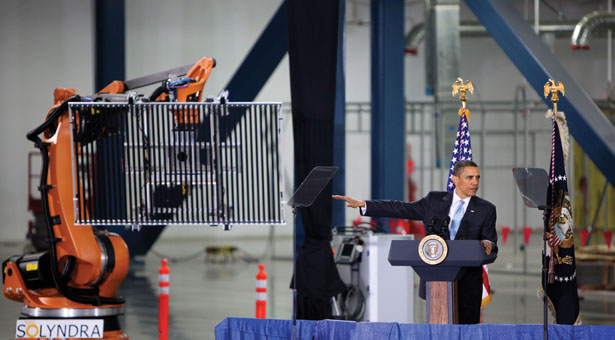 “American manufacturing” often conjures images of factories humming in the 1950s and 1960s, well before production migrated to lower-cost Asian countries and left the stain of the Rust Belt over the industrial northeast. Now, with US politics focused on the country’s high unemployment, politicians are eager for a way to bring back those glory days and their jobs.

“We have a huge opportunity, at this moment, to bring manufacturing back,” President Barack Obama said in his 2012 State of the Union speech. The Obama administration has proposed a series of initiatives to further that goal, from tax breaks for US-based manufacturers to retraining programs for workers.

The idea is certainly possible: As wages in China continue to surge, US manufacturing is becoming more competitive. Hal Sirkin, a partner at the Boston Consulting Group, argues that within roughly the next five years, it will be economical for manufacturers in certain industries to move portions of their supply chains back to the US. These are industries in which goods require little labor input and have high transportation costs, including computers and electronics, transportation goods, machinery, fabricated metals, appliances and furniture.

US labor rates are particularly attractive in southern states, said Ivo Naumann, Shanghai-based managing director at consulting firm AlixPartners. That might explain why US-based manufacturing has experienced modest growth, adding more than 300,000 jobs over the past two years. Caterpillar, GE and a few other multinationals have made headline-grabbing decisions to build new factories in the US, rather than China.

Yet while the American workforce on the whole is much more productive than China, too few US workers have the specific skills required for manufacturing. Many of those that do are trapped because the housing bust has left them underwater on their mortgages and unable to move to other regions of the country for work.

One solution, said Naumann, might be for the government to sponsor an apprenticeship system to train workers in the skills that manufacturers need. A similar system in Germany fuels the country’s vaunted mittelstand export manufacturing machine. In theory, the benefits could far outweigh the investment. A Boston Consulting Group report co-authored by Sirkin last year forecast that manufacturing processes for around 10-30% of goods in certain industries could come back to the US, adding US$20-50 billion to the economy and creating 2-3 million jobs.

Others are more skeptical of the benefits that reshoring manufacturing can bring to the US economy. The odds are “remote” that Barack Obama will leave office with more Americans employed in manufacturing than when he entered, said Tim Leunig, a reader in economic history at the London School of Economics.

The core problem is productivity, which has been growing at about 7% per year in the manufacturing sector – meaning less and less labor is required to produce the same goods. The recent uptick in US manufacturing jobs may be little more than a dead cat bounce after decades of unmitigated decline in the sector. Even China has lost around 25 million manufacturing jobs since 1990. “That’s the real enemy of employment in manufacturing,” Leunig said. “It’s not China. It’s productivity.”

Part of the fixation on manufacturing might be due to misleading labels, Leunig said. US shoppers bombarded with “Made in China” stickers understandably walk away with the impression that the bulk of their money goes to Chinese producers. But China operations are often confined to assembling products, among the least valuable links in the business chain.

For example, while Apple’s iPhone is ostensibly made in China, just US$6.50 of its total wholesale cost of US$178.96 goes to Chinese workers. The vast majority of money goes to US-based research and development, marketing, retail and distribution.

Even the iPhone’s sliver of Chinese input is above average. A report last year by the Federal Reserve Bank of San Francisco found that an overwhelming 80.1% of the value of all goods and services consumed in the US was created in America. Regardless of labels, just 2.7% of US consumer dollars find their way to China.

“The fact that three Chinese people spent 20 minutes clipping three bits together and getting paid 10 cents is really irrelevant to anything,” Leunig said. American policymakers would do well to think not only about how to attract manufacturing jobs, but why they want them in the first place.