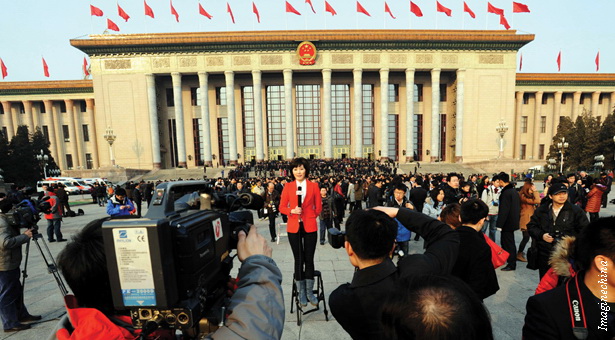 The political escapades playing out in Beijing this month are debatably the most important events of the year or a grand exercise in play acting. Surely, the Communist Party leadership views the annual National People’s Congress (NPC) that started Tuesday at the capital’s Great Hall of the People as a triumph of leadership through harmony. Any discord was to be addressed behind the scenes beforehand, clearing the way for a unified vision of China’s policy.

But there’s a reason that many commentators affix the phrase “rubber stamp” to any references to the congress. Many of those listening in this year will brand the NPC as a highly scripted performance that at best represents the broadest possible consensus among politicians rather than providing policy specifics.

Of course, this hasn’t stopped China analysts from picking apart every last character of the speeches delivered by the most powerful men in Asia this month. The summit will close the book on the decade-long Hu Jintao-Wen Jiabao administration defined by high-speed growth and tight social control. By March 17, the last day of the meeting, a new generation of cadres led by party head Xi Jinping will take the helm of the government, ending a thus-far smooth power transition that started at the Communist Party’s congress in November.

Experts don’t expect the freshman leadership to leave much of a mark on the already well-defined economic and political trajectory of the country – not yet at least. The work report outgoing Premier Wen Jiabao delivered Tuesday and the GDP growth target and fiscal deficit fell closely in line with predicted figures. As Citi Research pointed out in a note on Tuesday, Wen’s speech did not deviate from government documents already in circulation.

As if to steer away from future recommendations, the section in the work report traditionally labeled “objectives” had been demoted to mere “suggestions.” “This work report is more backward looking than instructive,” Societe Generale said in a note Tuesday.

In the two weeks to come, China watchers will certainly prick up their ears at any mention of specific policy guidelines – especially on urbanization and corruption.

Perhaps more than anything, the congress will serve as the new generation’s meet-and-greet with the world. Xi Jinping will address the nation for the first time as president. Many analysts expressed interest in hearing Li Keqiang, who should be China’s premier by the end of the week, in his first address in a top-leadership role.

Outside of the hard numbers already released, there’s ample room for speculation on which topics the leadership will broach, and on which they will keep quiet. However, several issues have come into focus during the months since the initial power change.

During the run up to the NPC, premier-in-waiting Li Keqiang reportedly held several high-level meetings focused on urbanization, Nicholas Consonery, a senior analyst at global political risk consultancy Eurasia Group. “Clearly it’s a big policy priority for him,” he said.

As China works to leverage the last of its diminishing pool of rural labor, guaranteeing a social safety net for migrant workers will be crucial to maintaining high growth. That process is far from complete but mention of reform to China’s “fragmented” pension system could indicate nearer-term commitment to improving it.

Indeed, one bill scheduled for a vote this month is an amendment to a law that could salve urban migration. The amendment on the land management law, if passed, would increase land sales revenues for farmers, a huge financial boost to rural populations as they transition to the city, according to a Societe Generale report released Monday. Passing the bill “will add to the conviction that the leaders are serious about change,” the report said.

The fight against corruption resounded loud and clear during Xi’s first speech as party secretary in November. In remarks published in state media since then, he has vowed to strike down corrupt officials – or tigers and flies, as he called them – at all levels of the party. The party has yet to go beyond cracking down on small-time gift giving and boozy banquets, however. Kerry Brown, executive director at the China Studies Centre at the University of Sydney, said he would be listening for signs that the new boss will follow through on a crackdown.

“He’s given these broad statements,” Brown said. “Where’s the meat?”

Fighting corruption is a game that if played to completion would lead to the purge of prominent political figures. How the new regime intends to deal with the vested interests that have greatly expanded their personal wealth since China’s Reform and Opening will in part define the next decade of leadership.

“Corruption is a big drag on some forms of growth and it has got to be dealt with. How are they going to affect this without alienating important political key players in the party?” Brown said. While leaders could surprise by offering specific measures that would truly root out corruption at the NPC, Brown notes that there were no definite signs that a more cohesive push against corruption would come this month.

Those waiting for more overt signs of change will have to wait for the Third Plenary Session of the 18th Party Congress due to be held in October.

In the past, the session was the birthing ground for many of modern China’s most influential reforms. Some 35 years earlier during the Third Plenary Session of the 11th Party Congress, Deng Xiaoping took control over the party and planted the seeds for the country’s reform and opening. “Inner-party democracy” first became a buzzword during the third plenary session of Hu Jintao’s first term as president in 2003. The meeting saw Hu “put his distinct stamp on policy” that was concerned with balanced growth and the social side of economic development, according to a report in the Hoover Institution’s China Leadership Monitor.

By October, it’s expected that Xi and his cohorts will have enough cohesion to begin making policy decisions that will define his 10-year term as the helmsman – and very likely deepen China’s reform.

“My view is that there are very few individuals in the government in Beijing who will tell you that everything is fine and nothing needs to change. But I think there’s a lot of dissonance about what reforms to prioritize and how quickly to move,” Consonery at Eurasia Group said. “I’m really looking more at the plenum in October for clearer answers.”