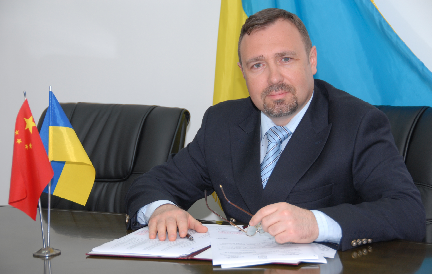 Serhiy Burdyliak, Ukraine’s consulate general in Shanghai, has worked for the Ukrainian government for nearly 20 years and has spent roughly seven of those years in China. Burdyliak spoke with China Economic Review about deepening relations and the bilateral agreements Ukraine and China signed on June 20. He provided insight on what the new consensus – which aims to boost trade and infrastructure – implies for the two countries.

Q: China and Ukraine recently signed deals worth US$3.5 billion. Which industries stand to benefit most?

A: The agreements will certainly open vast opportunities for investment, growth and technology transfer, in areas from space technology projects to agrarian development. Ukrainian ministries and business circles, along with their Chinese counterparts, signed 14 agreements allowing a number of infrastructure projects to begin in Ukraine. Consequently, we can expect the construction of traditional power and solar energy plants in Crimea, as well as growth in the agrarian, coal and potassium fertilizer sectors in Ukraine. As Ukraine is one of the world’s top exporters of wheat, and as China is Ukraine’s largest importer of sunflower oil, China stands to greatly benefit from increased development and trade.

Q: China has also announced an “extension of unconditional aid” to Ukraine. What exactly does this entail? Which Ukrainian industries stand to benefit from this sort of aid?

A: Thus far, China has contributed over US$12.5 million to the Ukrainian Ministry of Economic Cooperation and Trade. The ministry has yet to decide which program to attribute this money to. However, I am confident this money will be put toward important economic development programs.

Q: During PLA Chief Chen Bingde’s August 12 visit to Ukraine, the two sides agreed to expand an agreement in military and technology, including the construction of heavy transport aircrafts, heavy ships, tanks and facilities of antiaircraft defense. The Ukrainian prime minister also noted that the country was willing to help China in aircraft building. To Russia, the US and EU, these are very sensitive areas. Why is Ukraine willing to forge agreements with China in these areas?

A: Ukraine and China have wide prospects in military and military-technical cooperation, and I would like to emphasize that our cooperation is not directed against any third country. Moreover, we are developing our military spheres with absolute transparency and in full correspondence with the widely recognized principles of international law.

Q: If Ukraine succeeds in integrating into the European Union, the arms trade with China will surely be influenced, won’t it?

A: We consider the EU to be an optimal model for social and economic development. Today, Ukraine and the EU have reached the final stage of negotiations on the association agreement and intend to complete them by the Ukraine-EU Summit in Kiev this December. The completion of the EU association agreement will change the logic of our relations with the EU. However, as I stated the aim of our arms trade is not directed toward any third country. We firmly believe that our relations with China make a real contribution to the creation of a more secure and better world for everybody.

Q: China’s two bilateral relationships with Ukraine and Russia appears to create competition between the two former Soviet-bloc nations. What is your take on this?

A: Among private companies, there is bound to be competition: This is the reality of the world we live in. However, as states, we are confident that there are wide prospects for trade and economic cooperation between Ukraine, China and Russia in the trilateral format. Consequently, our prospects may include joint participation in the implementations of major projects in oil, gas and other types of energy, as well as transport, aircraft building and other areas. The establishment and further development of such projects will mutually benefit all three countries.