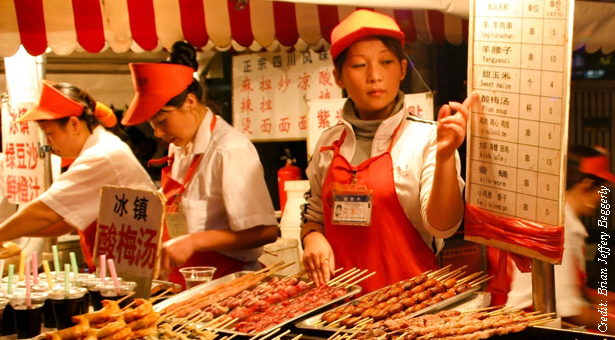 Everyone’s a bit edgy about food prices. That’s understandable: In recent years, the stuff caused big spikes in inflation. And it has again made headlines of late. Recent consumer price index (CPI) readings, notably in China but also elsewhere, have nudged up. A drought in New Zealand pushed global milk prices to a record. In India, the price of onions, essential for any tasty local dish, soared. Clearly, this thing needs watching. But, on the whole, we remain relaxed for now about food prices and headline inflation. The trouble lies with core prices. These are slower-grinding but ultimately far more challenging.

To add a bit more color to our discussion, consider the charts below. The first shows the global food price index produced by Food and Agriculture Organization, the UN body. What’s striking is that in terms of level, food costs remain extremely elevated, hovering not far below their peak in 2008 when the world was gripped by a food price scare. High food prices mean that households in urban areas, especially those that are poor, continue to feel a squeeze on their budget. By contrast, it means that farmers still receive a nice return for their produce. This, in part, explains the relative strength of rural consumption in much of Asia.

What matters for our discussion, however, is the change in food prices over time. After all, it is their change, not level, which contributes directly to inflation. The second chart shows the annual change of the FAO food cost index. Note that up until very recently this had fallen in annual terms.

That’s all the more surprising in light of the severe drought experienced in the US last summer, which had raised the price of some feedstock, such as soy, to record highs. At the time, the worry was that this would push up food inflation across the world, including in Asia. Alas, the shock never materialized. True, the price of pork rose sharply in China over the winter months (possibly a delayed response to the feedstock price climb), but it has since cooled again.

More broadly, the recent pickup in inflation readings, notably in China and Malaysia, is likely related to the Lunar New Year celebration. The seasonal spike in food demand tends to push up prices. But this effect is difficult to glean from the data (not only does the event shift around, but its impact is growing with every cycle). The next few inflation readings should paint a more benign picture.

Further out, another food price spike can obviously not be ruled out. But, looking at the current harvest cycle, especially for rice, which matters hugely in Southeast Asia, the outlook appears favorable. Apart from burgeoning stocks in Thailand (accumulated in government warehouses, which presumably will have to hit the market at some stage), there have been encouraging harvests in a number of countries of late, notably in the Philippines.

However, even if the risk of a food-driven spike in headline inflation during the coming months appears low, broader price pressures continue to climb. In fact, elevated food prices, even if not rising at the moment in annual terms, have an indirect impact on core inflation. Higher rural incomes slow the migration of labor to the cities, thus adding to wage pressures. In addition, the urban poor, with their budgets squeezed by inflation, demand some compensation, either through higher wages or via government support programs.

Reflecting the latter, a number of governments in Asia – including in India, Indonesia, Malaysia and, to some extent, Thailand – have maintained generous subsidies for fuel and other programs (like health care). These cannot be sustained forever. As they are removed, pent-up inflation pressures burst forward. Even in China, some price adjustments, such as for energy and electricity, may have to occur despite evidently deep government pockets. Subsidies and price controls, even if financially sustainable for some time, entail broader costs that ultimately harm investment and efficiency gains (and thus spur price pressures if growth is kept at its trend pace).

As we’ve noted before, Asia’s inflation process is changing in subtle ways. Over the last decade, it was spikes in energy and food prices, short and sharp, that drove up CPI readings. There are now signs that price pressures are spreading. Core-driven inflation, however, is not prone to spikes. Rather, it is a slower, cumulative process – albeit one that becomes far more intractable over time. Steadying headline CPI rising over the coming months, therefore, should not deflect from the underlying core price challenges that Asia now faces. Inflation is simply occurring in a different guise.