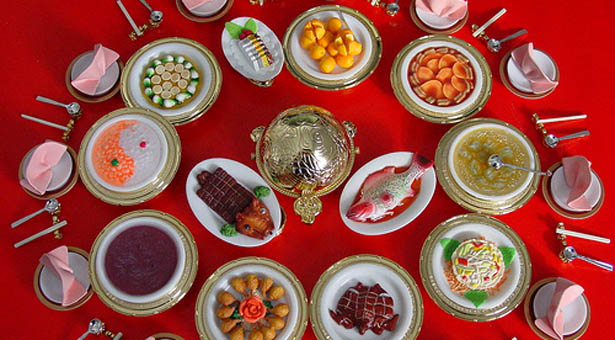 Four dishes and one soup

The simplicity of the dinner eaten by China’s Communist Party chief Xi Jinping during his visit to Fuping county in northern Hebei province in December set tongues wagging among the Chinese media and public. The relatively Spartan meal formed a sharp contrast with the common perception of officials lining their stomachs with lavish delicacies and copious amounts of baijiu. Photographs emerged of accompanying officials slurping pot noodles, evidence for the public that Xi wasn’t the only one in the delegation exercising thrift.

“Four dishes, one soup” quickly became shorthand for the government’s recent push to curb official excesses. Fighting corruption is not a new rallying cry for the Chinese government, which has been dogged with allegations of cronyism and corruption almost since its inception. But Xi’s actions to curtail the most visible of excesses shows a government aware that it needs to maintain at least a veneer of honest living to placate an increasingly well-informed public.

Recent exposés of graft have painted an ugly picture of greedy, immoral officials who line their pockets from the public purse.

Lei Zhengfu, a Chongqing official, was felled by the release of a sex video in November which showed him in flagrante with a younger mistress. He was fired within 72 hours of the online posting of the tape. Then, in early December, Sichuan deputy party chief Li Chuncheng came under investigation for allegedly buying and selling official positions in the Community Party and local government.

Garnering the most international attention was the conviction in August last year of Gu Kailai, the wife of disgraced Chongqing leader Bo Xilai, for the murder of Neil Heywood. The trial illuminated the extent to which family members of high ranking officials operate outside of the law.

As each of these cases emerged, netizens on China’s micro-blogging site Sina Weibo were quick to express their thoughts on the revelations. The almost ubiquitous use of Weibo has made public sentiment in China easier to gauge than ever and brought the government face-to-face with the nation’s widespread disgust over official corruption.

Xi, aware that what he termed the public’s “seething anger” over corruption could lead “to the end of the party,” started a crackdown in December on the most public excesses of officialdom.

In December, senior military officers were banned from holding alcohol fueled banquets or staying in luxury hotels when on work trips. Flowers, banners, red carpets, performances and souvenirs were prohibited from receptions. Also, regulations drawn up by the Central Military Commission dictated that officials should ensure their spouses, children and subordinates  do not accept bribes.

To deal with judicial corruption, Xi called for “justice in each judicial case” on January 7, emphasizing the importance of the independence of judges and police supervision, though he did not reveal how this would be implemented.

But while cleansing crusades may appear virtuous, in China they have a history of leaning in favor of those in charge. Cynics will judge the rhetoric and new rules as a careful ploy by the government to remove those that do not toe the party line. Some media commentators consider the corruptions charges against Bo Xilai, the once popular and charismatic leader, a sign that he fell out of favor with the ruling elite.

One change that would test the courage of the leadership’s convictions is the adoption of rules forcing the public disclosure of family assets of officials. The adoption of these “Sunshine Rules,” if enforced, would make detection of corrupt enrichment among officials easier, but it has been 18 years since the idea was first floated and officials still need only report assets internally.

For now it seems that Xi is concentrating on his officials’ public appetites, but it is the disclosure of their private ones that will mark a genuine push to un-mask the corrupted.