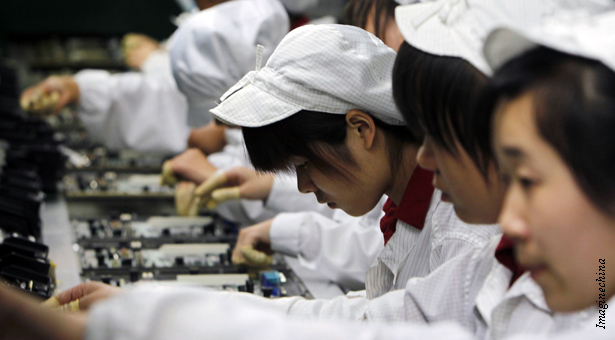 Spinoffs may hurt Foxconn, despite a short-term stock bump

Foxconn Technology Group’s business of making consumer electronics for the world’s top brands seemed failsafe for years. By hitching itself to Apple in particular, the company’s fortunes had risen with every consecutive quarter of rising iPhone and iPad sales.

But as Apple’s own Steve Jobs-induced magic starts to fade, so are Hon Hai’s fortunes. The company will be hard pressed this year to deliver on profit growth that Chairman Terry Guo has promised for Hon Hai Precision Industry, Foxconn’s flagship listed company. The company faces falling demand from Apple, a slump in the global personal computer sales and the general global economic malaise.

Guo, whose management skills are as razor-like as the company’s profit margin, of course has a plan to deliver more shareholder value despite this dilemma. Hon Hai revealed at its shareholder meeting in late June that the plan could include spinning off several of its business units.

Hon Hai will consider a split with its business of making connectors, or basic devices for joining electrical circuits; a unit which makes carbon nanotubes, which was Hon Hai looking at for several applications, including in its touch screen technology, batteries and cables; and its bonding materials business.

The company would presumably do that for the same reason any company spins off parts of itself. Those units are slower growing than the rest of the business, so spinning them off will maximize returns to shareholders in the core company.

Hon Hai can then also focus on developing new areas of business to potentially fuel higher growth. That could include e-commerce, automation and emerging technologies, as the investment bank Barclays pointed out in a research note coming off of Hon Hai’s annual meeting.

The company essentially hopes to shift from being “an aircraft carrier” to “a group of battleships,” in the words of Guo.

Barclays expressed some reservations about this potential shakeup. The move could cause a short-term boost in the company’s stock price as it makes the one-time adjustment of shedding slower growing businesses.

But, for example, its connector business will risk losing out on the economies of scale that come with being a part of a huge company like Hon Hai. That could include elevated costs for procurement and non-production related general overhead in areas like administration or sales.

The move would put the Hon Hai flagship in a position to forfeit its original strength: The ability to make components at a high margin so that it can accept the low margins on its assembly business. That strategy is what has given the company its edge.

The spinoffs appear a shortsighted fix for what could be a long-term slowdown at the heart of its business model. Although Hon Hai has yet to firmly commit to the plan, shedding those production lines would be another step in Guo’s somewhat baffling facelift for the firm.

Earlier this year, news circulated on Hon Hai’s retail ambitions, which included Foxconn-branded keyboards and headphones, as well as talk of the company actually producing its own content for the devices it makes. Last week, it bid on a license to operate a 4G spectrum in Taiwan, a venture that would transform the manufacturer into a telecom service provider.

Ironically, the connector business is what originally put the “conn” in Foxconn. By dropping that aspect of the operation, the company is disconnecting with one of the niches that made it a major industry player in the 1980s, decades before its workers would produce an iPad.

Investors must be hoping that some semblance of the company’s former self remains in a year’s time.