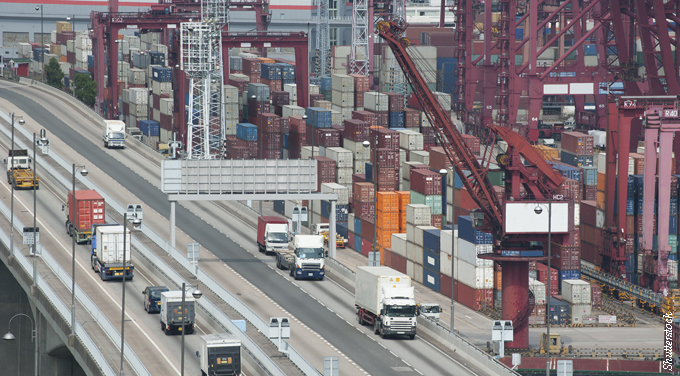 Why do official statistics show a record drop in highway shipping?

Freight shipments, along with everything else in China, are subject to seasonal changes. None is more important or disruptive than Spring Festival, when the entire country drops everything to spend a week ringing in the lunisolar new year back home with the family.

Every January or February highway freight, which ferries the vast majority of goods from point A to B domestically, takes an especially big hit as drivers take a brief break from life on the road. Meanwhile, passenger numbers rise in rough proportion to the number of people headed home for the holiday. In previous years, stats showed a quick recovery for freight volume post-holiday. This year was different: While 2013 saw a fairly typical Spring Festival dip of 519 million tons, in 2014 highway freight appeared to have fallen a staggering 1.812 billion tons according to official statistics. It has seemingly yet to fully recover.

Highway freight is a useful indicator of activity for an economy like China’s, whose manufacturing focus means things need hauling cross-country year round. Truckers and their rigs play a vital role in that shipping system, acting as its red blood cells – though they receive little credit for their contributions, monetary or otherwise. But while drivers are certainly feeling the squeeze these days, perhaps even enough so for many to give up the game, this year’s apparent dip and subsequent anemia almost certainly doesn’t reflect the reality on the ground. The more likely explanation is that the government changed definition of what freight is, and with it the scope of what is being measured.

No official explanation has been offered, nor have previous measurements been adjusted to take this change into account. This is all standard practice, but it leaves outside observers to puzzle out for themselves the real state of China’s highways, or something close to it. The results, useful if imperfect, testify to the enduring opacity of official statistics here, even as accuracy seems to improve over time.

Today’s highway freight industry and its vast labor glut have their roots in the late 80s and early 90s, when flexible one or two-man trucking outfits began to overtake lumbering state-owned shippers. Back then, with only a truck and a license one could easily join the influx of drivers hitting China’s ever-expanding highway system for wages far higher than anything available in the countryside. But most of those highways were tollways, and between growing tolls and rising diesel prices, drivers’ profits began to fall.

Today many of China’s truck drivers live on the ragged edge of bankruptcy, fighting for shipment offers from intermediary companies big enough that they can afford to fork over the money necessary to cover a factory’s shipments up front. In a typical shipping center middlemen scrawl freight rates on blackboards outside their company, usually one in a long line of small offices in front of which drivers gather to prospect. This imbalance of information further drains drivers’ pockets, since middlemen are free to lowball the real rates and pocket the difference. If one driver won’t take the offer, another probably will.

Economists are likewise at a disadvantage when the Transport Ministry decides to upend its old definition of highway freight. It famously (probably) did in August of 1998, which saw the previous month’s tonnage of 35 million shoot up to a Himalayan elevation of 751 million tons. The ministry gives no reason for these changes – nor, it’s worth noting, have their underlying calculations for freight growth ever been made public. But economists contacted by China Economic Review agreed that revisions had likely been made either to the scope or collection method of the data in question.

That makes data for the revised figures impossible to compare to that from years prior to the change, mucking with a useful cross-check against more closely watched economic indicators. This year’s timing has been particularly bad, as China faces a property slump whose knock-on effects have been felt throughout the economy. All eyes are on the publicly-announced target of 7.5% GDP growth for the year, which some believe the government has fudged the numbers on in the past. Among those skeptics is Thomas Rawski, economics professor at the University of Pittsburgh. But Rawski cautioned against conspiracy theorizing based on a single data shake-up.

“NBS is a slow-moving bureaucracy that tries to upgrade and improve their product,” he said. “Changes have a long lead time – they cannot forecast where things will stand when they introduce new definitions, which often happens without public announcement.”

China hands are not completely helpless in the face of such changes. Julian Pritchard at Capital Economics suggested one resource that can be relied on to deliver less stochastic statistics, albeit while relying on a few assumptions. Alongside the freight data released most months, the Ministry of Transport also provides monthly year-on-year growth rates for both total freight and the different sectors (highway, rail, waterway, civil aviation). Pritchard said he suspected these rates are adjusted to take the changes in data scope into account.

With the data for both growth rates and the reported freight volume for 2013, it’s possible to extrapolate forward into this year to get an idea of what freight volume might look like if the powers that be hadn’t changed the definition. Using that year’s stats as a basis to project forward from late last year into the Spring Festival season of 2014 on the basis of growth rates actually charts a trajectory much like that seen in recent years. Since highway freight accounts for the overwhelming majority of total freight in China, it makes sense to apply the same method to this sector to check and be sure its adjusted figures show the same mitigation. The results are encouraging: much of the apparent weakness in this year’s figures disappears when highway freight is adjusted, though not quite all of it.

As for the remainder, rail freight volume has been slow in 2014. Part of that may be due to slow growth in electricity, suggested China economist Ryan Rutkowski at the Peterson Institute for International Economics. Coal makes up a full 52% of railway freight volume, Rutkowski said, and thermal (coal) power generation only grew by 1.4% in the first eight months of this year. The National Bureau of Statistics claims the slowdown is due to seasonal differences.

The east coast was particularly hot in 2013, so demand last year was greater relative to 2014. This year coal power grew a third slower than electricity as a whole, meaning other forms of power grew faster. Because the east coast is more heavily reliant on coal than other regions, a cooler year might have lowered demand for power and with it coal shipments. “This could explain why the other forms of power generation continued to increase at a faster pace, such as hydro,” Rutkowski said. Hydropower’s share of total energy production rose from 11% at in the beginning of the year to 17% in August.

Thus, while freight data overall may point to weaker economic activity, it’s not necessarily a cause for serious concern all on its own. It may simply reflect the ongoing slowdown in the property sector and heavy industry, both of which have been sluggish lately. Even so, the full story – including how freight growth rates are calculated, how that changed between this year and the last, and why it changed at all – remain a mystery.

That means the method of base-year extrapolation recommended by Pritchard is not without its problems, as he readily admitted. He pointed out that the method assumes that freight volume would have grown at the same rate if authorities hadn’t changed the scope of the data, which may not be the case. Still, the growth rates remain a solid starting point because they likely take into account not only changes in the scope of data, Pritchard noted, but also revisions to data from the previous year not yet made public.

That might be one reason why even when calculating year-over-year growth rates for a given month, the official rates can vary from what the official stats on freight volume suggest – sometimes substantially. But, while perhaps maddeningly obtuse, the current system is better than nothing, and the shake-ups from time to time in the scope of a figure’s data are, assumedly, meant to improve their accuracy. Like truckers eyeing the latest chalkboard freight rates, observers will either have to be content with what they can get, or give up the business. ♦