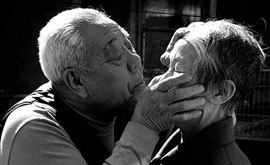 
“If you stay around after six, you get the meat on offer,” Teacher Li said. “That’s about 20% off the chicken legs for the wife who makes the soup, and you get some of the greens for next to nothing – and there’s nothing wrong with them!”

Li has been out shopping again for what he calls bargains, but still manages to spend most of the household budget. As a retired member of China’s military-industrial complex, Li and his wife live a fairly comfortable life in Beijing. Their daughter is off to New Zealand soon – she gives about a third of her salary to her parents – but Mr and Mrs Li often entertain local friends and in-laws for dinner and seasonal treats in their state-purchased apartment.

Mrs Li does most of the shopping in the morning when her daughter is at work and looks after her granddaughter, while Mr Li spends every dollar she saves on his many “bargains.”

The Lis are not rich or poor, but are typical senior citizens in Beijing. They are also part of a group of consumers that will account for almost a third of the country’s population in 15 to 25 years – a demographic shift that presents risks for the country, but opportunities for savvy retailers.

There can be little doubt that China is aging. According to the China Population and Development Research Center, the country’s population is expected to grow from 1.33 billion to 1.45 billion by 2050. The number of senior citizens – those aged 65 and over – is expected to grow by seven million on an annual basis between 2015 and 2020, and by an extra 10 million each year between 2030 and 2035. This would bring the total number of seniors from an estimated 180 million in 2009 – the population of Russia – to 350 million – bigger than the present population of the US.

Aging poses a particular challenge in China. The ongoing demographic shift is uncovering threats to the country’s long-term growth fundamentals by reducing the pool of labor while putting extra pressure on an already-weak social security system. There is little in the way of state pensions or healthcare to support an elderly populace.

The Asian Development Bank (ADB) estimates that the number of citizens over 60 will account for 31% of the population by 2015, compared with a world average of 22%. The situation is aggravated not just by the speed of aging, but by growing income disparities, said Yolanda Fernández Lommen, head of the ADB’s economics unit in Beijing.

With real income per capita around US$4,000, China is aging at an early level of development. Fernández Lommen says that the US and Japan had average per capita incomes of around US$15,000-16,000 at a similar stage of aging.

“The pressures and challenges of aging are greater in China than in other countries,” she said. “Aging is a new phenomenon in China and while there is an awareness of this problem, the challenges are not fully understood. That is why we haven’t yet seen any decisive policy to counteract the potential negative effects of aging.”

Yet the imminent swing in China’s demographics and the pressures that are likely to accompany it can in fact be partially attributed to government policy. Since 1978, the majority of Chinese families have been restricted to having just one child, creating what is known as the “4:2:1” family structure: two sets of grandparents, two parents and one child.

This ultimately older family unit, a slowing birthrate and rising life expectancy could put pressure on consumer patterns, according to Zhang Hongfeng, director of the Economic Research Institution at Shandong Economic University.

“With the increasing number of senior citizens and the current family structure, consumption levels could fall,” he said.
Also, since retirement age is so low – 60 for men and 55 for women – the income-generating ability of the over-60 age group is decreasing, as is their spending on consumer goods. “This is a problem,” Zhang added.

Not everyone sees China’s graying population as problematic. While government support for a hardy domestic consumer market has only weakly addressed some structural issues facing the economy – insurance, healthcare and pensions – deepening consumer pockets and signs of a growing shift in the identity of household spenders could support longevity in the mainland market.

The 18-35 youth demographic is still the mainstay of most domestic and multinational companies in China, but this must change if these firms are to grow, nurture and maintain spenders’ interest in their products.

According to Kunal Sinha, chief knowledge officer at Ogilvy & Mather Greater China, the problem is a misguided perception of China’s elderly population.

“For most brands, they see a profile of older consumers as being a problem – not an opportunity,” said Sinha. “This is mistaken.”

Sinha points to sportswear maker Li Ning (2331.HK), which he says was formerly the favored athletic brand of senior citizens. It was considered affordable and reliable by the some 50 million elderly who take to China’s parks in the morning to walk, play badminton, or practice tai chi. Li Ning last year remodeled itself to capture a younger, hipper, and more cash-liquid consumer audience. In moving away from its “silver-athlete” image, it has alienated a previously loyal customer base. Sales and book orders for 2011 have since nose-dived.

“The basic assumption that seniors have less money to spend than younger people is slightly misplaced,” Sinha said. “The younger population does have a greater amount of disposable income, but older people have savings built up over the past 30 years, and they also now have more control over the family budget.”

Sinha gave the example of grocery shopping: The fast-moving consumer goods (FMCG) sector is becoming increasingly competitive in China, with domestic and international brands and retailers elbowing each other for greater market share. The person who controls the family purse, controls the market.

“Seniors are taking a lot more control over family purchases, especially in the big cities where young couples don’t have time to do the shopping. This is what retired parents or grandparents are taking up.”

According to research conducted by Ogilvy, old-age shoppers spend on average two to three hours in supermarkets a week, compared to just 45 minutes in the US. “If you go to any supermarket or hypermarket in big cities here, you’ll find the majority of shoppers are all in their mid-60s and older,” Sinha said.

While traditionally seniors would buy at local stores and wet markets, believing that produce at supermarkets was both more expensive and less fresh, recent years have seen a shift in shopping patterns. Some companies have adopted a direct approach to overcoming preconceptions.

“With the likes of Carrefour (CA.Euronext) and Lotus (owned by Tesco; TSCO.LSE) bringing in seniors by bus, for free … they tend to start shopping there,” said Sinha. By word of mouth, more senior customers come.”

This developing trend could turn out to be the boon foreign retailers have been waiting for as the likes of Wal-Mart (WMT.NYSE), Carrefour, Tesco and Metro (MTR.DAX) push for greater market share and compete with domestic retail giants such as Lianhua (0980.HK) and China Resources Enterprise (0291.HK).

But spreading the marketing message by word-of-mouth is just not fast enough for most companies. Despite data pointing to the growing importance of China’s aging populace, research indicates that the gray-haired consumer is largely ignored by many companies that instead follow Li Ning’s lead. By targeting the 18-35 and 45-50 year-old groups, these firms hope to snare consumers who show a greater propensity to spend today, no
t tomorrow.

“The current group of older consumers are not the low hanging fruit,” said Ben Cavender, associate principal at China Market Research (CMR) in Shanghai. Cavender believes seniors are more difficult to sell to because of their higher savings rate: They are generally more concerned about their pensions and current cash spending, and they are not as interested in consumption.

One product line, however, that is attracting an increased amount of interest from both the 30s and over-60s consumer group is the health food and dietary supplement segment. While health and well-being have always been among the leading consumer concerns in China, dietary supplements are just now beginning to work their way to the top of seniors’ shopping lists.

Cavender points to multivitamin dietary supplement Centrum, produced by Wyeth, now part of Pfizer (PFE.NYSE), as having been somewhat of a slow burner in the domestic market. But sales are now beginning to show strong upward movement after an aggressive campaign pushing Centrum Silver, which is directly targeted at older consumers.
Despite the growth in demand for supplements and the push by foreign firms to feed a growing appetite, domestic firms have been very slow to join in. Zhang Fabao of Bio On, a medical and health-care consultancy, says more and more foreign dietary supplement brands will come to China in the next few years, posing a threat to overly cautious domestic companies.

“Many new Chinese firms are producing low-end products with little variety. They will be driven out of the market if there are no dramatic improvements,” he said.

According to Zhang, big mainland pharmaceutical and healthcare brands such as Tong Ren Tang (8069.HK) and Yunnan Baiyao (000538.SZ) are still observing from the sidelines, unsure of when to enter the market or how to price and successfully sell their products to an older consumer audience. This means that seniors are not as aware of domestic offerings as they are of foreign brands, which are marketed by multinationals with experience selling in more consumer environments.

“Chinese healthcare manufacturers are shortsighted and tend only to look for quick results, so the market is quite fragmented,” said Zhang.

CMR’s Cavender agrees. Compared with most mainland companies, the big multinationals like Johnson & Johnson (JNJ.NYSE), Unilever (UL.NYSER) and Procter & Gamble (PG.NYSE) are working hard to create brand loyalty across the entire spectrum of FMCG and beyond. Anything they can do now to get consumers to buy their products can be turned into a very developed preference later on.

And brand loyalty is all-important. If a company can get customers in their mid-30s and early 40s to develop an affinity for a brand, they are more likely to continue buying the same brand for the next 20 years. This contrasts starkly with a much more fickle 25-year-old consumer group that tends to flit from brand to brand over a course of months, rather than years.

An issue of respect

“The views of the elderly are much more respected here than in the West and that is embedded into the culture, society and family life, allowing them somewhat more consumer control,” said Ogilvy & Mather’s Sinha.

“Seniors are still very important in passing values to the younger generation. Companies have to start bringing these seniors into the marketing discourse.”

While the grandparents of the Li family in Beijing still look for bargains and remain slightly more frugal than their daughter, their consumer demands are changing, not diminishing. This is a crucial point for the future success of companies looking to expand their audience beyond a younger consumer base, which has little time for brand loyalty.
“Consumers want brands to stay relevant to them even when they are in their late 60s or 70s,” said Sinha.

“Large companies have to layer their products and branding so that you literally have something for the consumer from the cradle to – not necessarily the grave – but a few years just before that.”