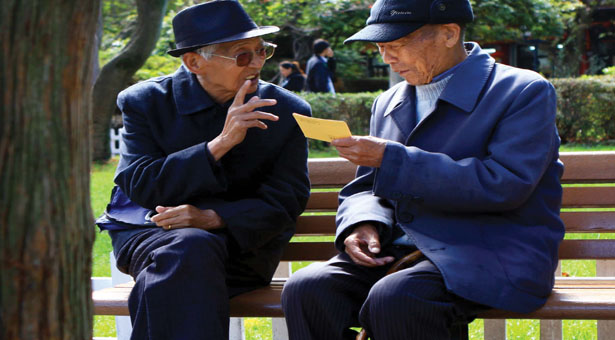 For more than 30 years, the southern province of Guangdong has served as Beijing’s guinea pig for political and economic reforms. On March 19 it dutifully jumped back on the wheel, when the local government turned oversight of RMB100 billion (US$16 billion) of its pension assets to the National Council for Social Security Fund (NCSSF), controlled by Beijing.

In other countries, such money-shuffling within the pension system is a matter of accounting. But for China’s pension funds it could mark a major shift of power away from local governments and towards Beijing. Financial media has been abuzz with news about Guangdong’s trial, and Chinese officials have hailed the project as a “breakthrough.”

One can only hope they are right, because China’s pension system – which consultancy Z-Ben Advisors expects will collectively have around RMB7.4 trillion (US$1.2 trillion) in assets under management by the end of this year – is in dire straits. Liabilities have soared, yet pension coverage remains low. Many Chinese have been excluded from coverage in the shift from a largely planned to a largely free-market economy. Meanwhile, the country’s one-child policy has generated a massive fertility decline which will reduce the number of workers paying into the system.

Unless the current pace of change dramatically accelerates, China’s pension system will eventually find itself either struggling to support a nation of impoverished elders or in bankruptcy.

In the early 1990s China’s pension system evolved from its Maoist era “Iron Rice Bowl” model of cradle-to-grave benefits into a three-tiered structure, similar to that of many developed countries. The bedrock is a basic pension financed by mandatory contributions, akin to the US Social Security system. This pension is then supplemented by a second tier of voluntary contributions from companies and employees called “enterprise annuities” – similar to US 401(k) plans – and a third tier of private personal retirement accounts.

Just 31% of the workforce is covered by the basic first-tier pension system, and participation falls to well under 1% for the second tier (data on the third tier is patchy). This low coverage rate is a legacy of reform-era policies: Unlike the centralized pension systems of most developed countries, Chinese pensions have historically been tied to local governments and the hukou household registration system. Benefits are not fully portable, excluding from the system hundreds of millions of Chinese who migrated to cities for work over the past three decades. Those working in the country’s large “informal sector” of unregistered businesses also fall outside the official pension system, and rural coverage is almost non-existent, despite recent pilot reforms.

Those who are covered, however, enjoy fantastic perks. Iron Rice Bowl benefits have been “grandfathered in” to the current system. Many elderly urban retirees enjoy replacement ratios – pension payouts as a share of working age salary – of well over 100%.

To pay for this generosity, the basic pension scheme charges a tax rate – a “mandatory contribution,” in pension jargon – of 28%. That is high not only by international standards (the US Social Security tax rate is less than half that level), but it is also particularly ill-suited to an emerging market with a large informal sector, said Richard Jackson, director of the Global Aging Initiative at the Center for Strategic and International Studies, a think tank in Washington, DC. Unregistered companies are hesitant to make the leap into the formal sector for fear of being slapped with an eye-watering social security tax. Their employees therefore stay outside the pension system.

What is even more worrying is that China’s first-tier pension program appears completely unsustainable in the long run. Today’s scheme is mostly “pay-as-you-go,” meaning that taxes from workers are funneled directly to current retirees. The system has worked well for more than two decades, because a booming workforce and ever-rising wages kept tax dollars streaming into elderly pockets.

But China is now aging faster than any other big country, due largely to the one-child policy. The country’s working age population is projected to peak around 2015-2017. Meanwhile, the proportion of the population over 60 will balloon to more than 30% by 2050 from about 12% now, according to projections by the Chinese Academy of Social Sciences.

These demographics mean China’s pension system will face an enormous crunch around 2030, said Jessica Chen, principal of retirement, risk and finance at Mercer, a consultancy. Beijing is therefore attempting to transition from a pay-as-you-go to a “fully funded” system, in which contributions are saved up to pay for both current and future retirees. Of the current system’s 28% contribution rate, the 20% tax on employers is channeled into the pay-as-you-go system, and the remaining 8% tax on employees is stored in individual accounts (the fully-funded scheme).

However, the transition is still in its infancy and not moving fast. Capital in the basic fully-funded system is just 3% of GDP, far off of the global average of 20-80%. Officials have been tinkering with tax incentives to encourage participation in voluntary second-tier programs for a decade, but these assets are just 1% of GDP. By contrast, Chen said that Poland’s second-tier assets jumped from 0.3% to 14% of GDP over a roughly similar period.

Keenly aware it cannot close the gap in time, Beijing established the National Social Security Fund (overseen by the NCSSF) last decade, funded in part by individual accounts, as a strategic reserve to be drawn down when the elderly wave hits.

Most pension assets are still held by local governments and can only be invested in low-yielding bank deposits. Last year they averaged a paltry 2% return, well below the rate of inflation. By contrast, the NSSF is allowed to invest in domestic bond and stock markets and last year chalked up returns of 10%.

Analysts said pilot programs like the one in Guangdong are a step in the right direction, but politics is getting in the way of major reform. Local governments are reluctant to hand money which might otherwise be invested within the province over to Beijing, said Jackson of CSIS. In many cases, Beijing has essentially bartered for control of the funds: Local governments who are struggling to keep up with payouts for today’s retirees can receive a subsidy from Beijing in exchange for control of the longer-term individual account funds.

Moreover, investing pension assets is a challenge in its own right. Chen of Mercer said that media coverage of the Guangdong pilot program is probably due more to popular concern about how the money will be handled than any new developments – local governments have been transferring funds to the NSSF since 2006.

Those concerns are understandable. China’s capital markets remain under-regulated, immature and risky compared to those in developed countries; the dismal performance of the Shanghai Stock Exchange since 2007 has not inspired confidence. As with any country contemplating pension reform, the question ultimately boils down to whether future pensioners trust the markets or the politicians, argued Jackson of CSIS. China has less historical experience with markets than the US, so its citizens may plump for more government control, he said.

But even politics is a risk: In recent years, governments from Argentina and Hungary have raided pension funds to pay their debts. The only real means to assuage concern is to make the entire system transparent and give the public a voice in how their pension assets are managed, said Cheng Yuan, an associate professor at the Population Research Institute at Fudan University in Shanghai.

Most experts agree that China’s
pension system is improving; the real problem is the pace of change. “There’s not much time for China to catch up before 2030,” said Chen. “We’ve been talking about these issues since the 1980s. Now 20 years have passed – we’re not moving fast, and time is getting shorter and shorter.”