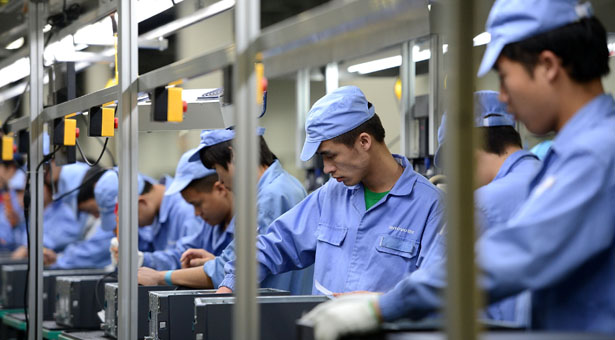 “Transcendence depends on how you think,” a Lenovo advertisement proclaimed in 2003. The Chinese electronics maker heeds its own advice. In the last few years, it has implemented an innovative strategy to outpace its competitors. In October, the firm became the world’s largest personal computer (PC) maker, edging out HP with a 15.7% share of the market.

This is an impressive milestone, but dominance in the PC market will not ensure longer-term growth in Lenovo’s share price, or cement its profitability. The PC sector is set to contract this year for the first time since the dot-com bust in 2001. Global PC shipments fell 8.3% year-on-year in the third quarter, according to technology research firm Gartner.

But Lenovo is not resting on its laurels. Having made several major acquisitions this year to reprogram for a shifting tech environment, Lenovo is set to emerge from its bout of purchases with a product range well beyond PCs and more markets to exploit.

Lenovo’s recent burst of expansion started in August when it partnered with US IT hardware storage company EMC to jointly develop and sell computer servers. The company picked up the pace in September with its purchase of Brazil’s largest consumer electronics manufacturer CCE and US cloud computing firm Stoneware.

In the tech industry where new gadgets become obsolete faster than ever, research and development is the key to sustained profitability. Lenovo has focused its R&D on a “PC+” strategy that branches into new devices. The firm plans to increase R&D spending by 40% by 2015 and hired 40 former Motorola researchers in October.

Lenovo’s PC+ strategy has already brought it success in the smartphone segment. The company has become the second largest smartphone vendor in China, with US$1 billion in sales as of early September after only 18 months in the market. The firm has also pivoted into the tablet market: It is now the second-largest tablet maker in China and ranks fourth globally. These non-PC operations are losing money on the mainland, but several analysts predict that they will turn profits in the next two quarters.

Lenovo’s non-manufacturing purchases will help it explore the world outside PCs. The acquisition of Stoneware’s cloud computing services, Lenovo’s first foray into software, may help its consumers transition more easily between devices. By partnering with EMC, Lenovo will potentially increase sales of servers and storage equipment to corporations.

The second prong of Lenovo’s strategy is to expand into less-saturated foreign markets to reduce its reliance on China. Up until now, the firm has succeeded in bolstering its share in emerging markets, especially Russia and former Soviet nations, where it held an 11.6% market share as of August. The firm’s purchase of CCE made it the third-largest PC maker in Brazil, where PC demand is still growing. And Lenovo launched smartphones in India in November, where it has also shouldered out Taiwan’s Acer to become the number one PC vendor.

In the short-term, the company’s profits may be held down by the increasingly saturated Chinese PC market. Mainland sales account for more than 80% of Lenovo’s operating profit, and there are already signs that China’s appetite for PCs is plateauing. “We are certain that Lenovo will continue to gain market share in China, but with a 35% market share already taken, we believe it might eventually peak at 40-45%,” Barclays noted in an August report. Lenovo’s earnings could also be held hostage by its latest products, which have high upfront R&D costs that need to be recouped in sales volume.

Despite these challenges, Lenovo has maintained its momentum as the world’s fastest-growing PC company for 13 straight quarters. The company gained market share even as Chinese PC sales shrunk and reported a profit of US$206 million for the quarter ending September 30, a 24% increase year-on-year. Analysts expect profits to rise further as its smartphone business breaks even. As of press time, CCB International, UBS, Citi and Barclays rated Lenovo as a buy.

In the long term, Lenovo will need to keep costs in check as it restructures and integrates its new resources. Otherwise it may not realize the advantages of larger economies of scale, and its profits may suffer.

But the company’s metamorphosis from a Chinese PC maker worth US$32,000 to a multi-million dollar electronics and software empire is testament to its astute strategic planning. If the company continues to follow the strategies that have served it well so far, expect Lenovo to continue its ascent.