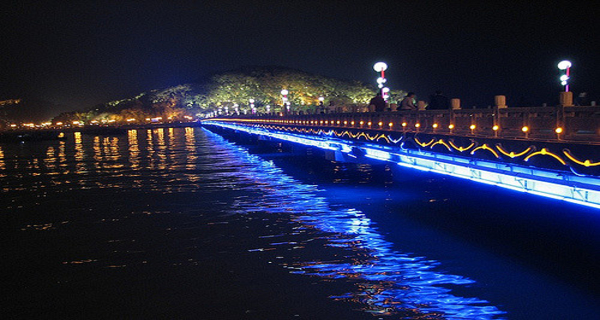 But as with the bridge, which attracted criticism for delays, accidents, and running over budget, China’s ambitions to further integrate its southern economic powerhouse haven’t always enjoyed smooth sailing. Despite its manufacturing prowess, differences in regulations as well as industrial makeup separate the 11 cities of the GBA. In order to level up the region amid trade tensions and a slowing economy, regulations will have to bring down those barriers, making the most of the cities’ individual strengths.

While the GBA was incorporated into China’s 13th Five-Year Plan in 2016, and the subject of an agreement signed by regional leaders the following year, a framework for development hasn’t been released yet. Premier Li Keqiang announced that a plan would be formulated last spring, but delays have since pushed its release back to February 2019 or later, South China Morning Post sources say. That may be due to worries that, like the Made in China 2025 blueprint, concrete plans would be perceived as a challenge to US tech dominance.

However, that also means that the timing and impact of overall GBA policy remain unclear.

The area has great potential for growth, and not just due to the inclusion of financial hubs like Hong Kong and Guangzhou, or Shenzhen–often referred to as China’s hardware capital.

The other mainland cities of the GBA are also industrial heavyweights: together, the nine municipalities accounted for 80% of Guangdong’s manufacturing in 2016.

One in every five smartphones is made in the factory town of Dongguan. Its GDP, as well as that of nearby Foshan, is estimated to top RMB 1 trillion ($148 billion) by 2020 as both shift towards high-tech manufacturing. And last year government policies convinced 6,000 tech companies to set up shop in Guangzhou’s remote Nansha District, which now houses up-and-coming AI startups Pony.ai and CloudWalk.

Combined with Hong Kong and Macau, the 11 cities hold some 70 million people supporting an economy worth over $1.8 trillion–roughly the size of Brazil’s GDP, or twice that of Indonesia. Last August, investment firm CBRE Group predicted the rise of the “world’s largest bay area economy,” while according to a 2017 survey of businesspeople in the GBA supported by Hong Kong’s General Chamber for Commerce, 80% of respondents supported integrated development for the region.

In some areas, technology development is already well underway, delays of a master plan notwithstanding.

The Special Economic Zone of Zhuhai, for instance, has been quietly fostering tech growth since at least 1992, when its national-level Hi-Tech Industrial Development Zonewas established. The sprawling complex now incorporates four college campuses, as well as the offices of Beijing-based software company Kingsoft and flagging smartphone brand Meizu.

In addition, according to staff in a building branded “Southern Software Park,” it houses startups such as Oceanalpha–a Zhuhai company developing autonomous watercraft that were featured on CCTV’s 2018 Chinese New Year Gala.

Other industrial or free trade zones have since sprung up, attracting enterprises from neighboring Macau, Hong Kong, and further overseas. Altogether, Zhuhai mayor Yao Yisheng announced in January 2018, high-tech manufacturing contributed over RMB 30 billion, or nearly 28%, to the city’s GDP.

Jordan Cheng, CEO of AR smart glasses startup Mad Gaze, was among those drawn in by Zhuhai’s beneficial policies. Although the company is headquartered in Hong Kong, it’s working on developing public security tools with police forces in Shaanxi province, Hefei in Anhui province, and Shenzhen’s Luohu District.

Cheng said that “for the manufacturing, for the talent, for the market,” GBA plans represent “a good opportunity for us.” He expects that his burgeoning startup will “still need the government support” in the future, as it seeks to expand in a developing field.

Not far away via high-speed rail, Guangzhou’s remote Nansha District is home to a Pilot Free Trade Zone with grand ambitions. In late 2018, on top of an existing multiyear scheme to promote AI development, local government announced it would sink RMB 30 billion into sectors including IT and biotechnology as well as artificial intelligence.

It’s a stark contrast with more rural parts of the district, which still abound with picturesque canals and plots of farmland. But as Pony.ai COO Hu Wen pointed out at a CNBC conference held there last November, lack of traffic congestion and nice weather help make Nansha a “really ideal place” to test out autonomous cars.

Having launched a ride-sharing fleet there last February, Hu said that Pony.ai is considering scaling “up to 1,000 vehicles” in Nansha at some point. That’s not only because of the clear roads; Hu said that compared to other areas in China, the national government has granted the district more “permission and power” to experiment.

Gaps in the plan

Staggering statistics can mask gaping differences between cities and regions, however.

Even high-profile infrastructure projects like the Hong Kong-Macau-Zhuhai bridge, meant to bring the GBA closer together, reflect barriers among the cities. To take advantage of it, drivers must jump through various bureaucratic hurdles: requirements include three different permits, two types of car insurance, and registering with Zhuhai’s government.

In an interview with TechNode last November, Toa Charm of Hong Kong government-backed initiative Cyberport said that the GBA represents a “golden moment” for innovation, but only if officials can collaborate to overcome regulatory barriers.

Support from China’s national government is key, but so is “the implementation, how we can resolve all the differences,” he said. Those persist in areas from cryptocurrency exchanges to attitudes towards the adoption of new technologies, according to Charm.

There are also significant differences when it comes to industrial makeup. In 2016, Shenzhen’s GDP per capita was the highest in Guangdong, but made up only 56% and 35% of Hong Kong and Macau’s, respectively. The region’s average GDP per capita also lagged well behind its supposed international competitors–New York, San Francisco, and Tokyo–as did the percentage of the economy supported by tertiary industry.

That puts the pressure on policymakers to even out development, especially in places such as Zhaoqing, Jiangmen, and Zhongshan, which still focus on low- and middle-end manufacturing. In order to upgrade the region, cities like these “can’t just focus on manufacturing anymore,” says Marcos Chan.

He acknowledges that factors like the US-China trade war and a domestic economy slump will impact GBA plans in the near future. However, further developing the region is a “long-term ambition” for China, one that will affect the area for “decades and decades.”

Some industry observers are banking on that fact. At its Nansha conference last November, international business news outlet CNBC announced that it would establish a local branch in Guangzhou due to the area’s potential for innovation. Reuters cited similar reasons after it announced a new Shenzhen office last May.