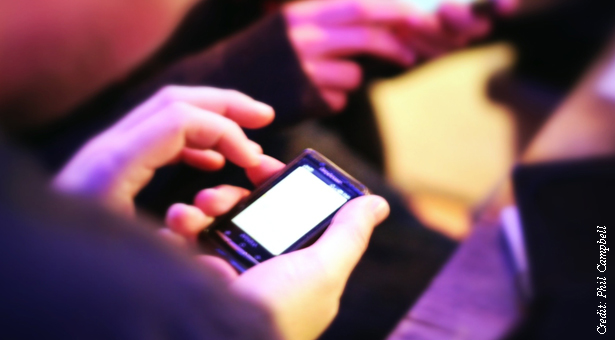 Two Chinese stand together, shaking their smartphones at each other. They stop, and expressions of delight light up their faces, followed by furious typing.

Those who have witnessed a scene like this have probably seen Tencent’s WeChat in action. The mobile chatting service has a variety of fun features, like the “shake” function to locate new contacts, walkie-talkie messaging and a plethora of animated emoticons. The service was released in January 2011; by January 2013, it claimed to have 300 million registered users.

The service has eaten into the popularity of China’s social media king, Sina Weibo. The Twitter-like service, launched in August 2009, also recorded booming growth in user numbers, from only 50 million in October 2010 to more than 400 million two years later. But now that rapid growth appears to be leveling off.

That much was evident from Sina’s earnings release on Wednesday. The company reported a 75% annual drop in fourth-quarter profit to US$2.4 million, mainly due to increased investment in its services and a slowing online advertising market.

The bulk of Sina’s US$139.1 million in revenues came from online advertising income, which rose just 7% to US$110.7 million in the fourth quarter. Non-advertising revenues, including the Sina Weibo service, decreased 4% to US$28.5 million – hardly the cornerstone of business that some analysts foresaw several years ago.

The market responded positively to these results, which outperformed company forecasts and analyst expectations. Sina had forecast lower results this year in line with its pledge that 2013 “would be a year of investment.” Sina’s shares, which have sank more than 21% over the past year, shot up  11.3% to US$59.55 only minutes from its previous closing price minutes after the market opened Wednesday in New York, but had receded to US$54.80 by Thursday’s close.

Investment is crucial in the tech sector. But the time is nigh for Sina to start turning a profit from its investment or risk ceding its momentum to Tencent.

The two services are not direct competitors: Sina Weibo is like a multimedia-enabled version of Twitter, while WeChat is more comparable to a blinged-out version of the US messaging application What’s App. However, WeChat does compete for users’ time and advertiser attention.

Sina Chairman and CEO Charles Chao said in the earnings conference call that Sina Weibo faced significant competition from Tencent, but that his service has already hit critical mass. But there’s no such thing in the technology age. Even if people continue to use an aging service, their time spent online and the quality of their interactions can fall. That means less opportunity for users to interact with advertisers, which eventually translates to lower profits.

Sina’s new “monetization” efforts could be speeding up this process. The company rolled out two products to increase sales in the fourth quarter, one which lets advertisers promote their posts among users that are not following them and another that links popular microbloggers with advertisers. As has been the case with Facebook, those products are likely to hurt user experience and further detract from the platform’s reputation.

Sina Weibo still remains the best place for many Chinese to connect with friends, keep up with the news and find updates from their favorite stars. And for the educated minority who seek out that information, it’s also the place to go for edgy social and political commentary.

The company has been forced to hire censors and invest in monitoring technologies to remain in good standing with the authorities, but those measures have not quashed the open exchange of information. Even after recently being barred from the Weibo service for three days, ex-Google China CEO Kai-fu Lee praised the service’s unparalleled openness.

But Sina will need to do more to keep its coolness factor intact. The company’s year of investment needs to produce results soon, or Sina will have more problems than it can shake a smartphone at.