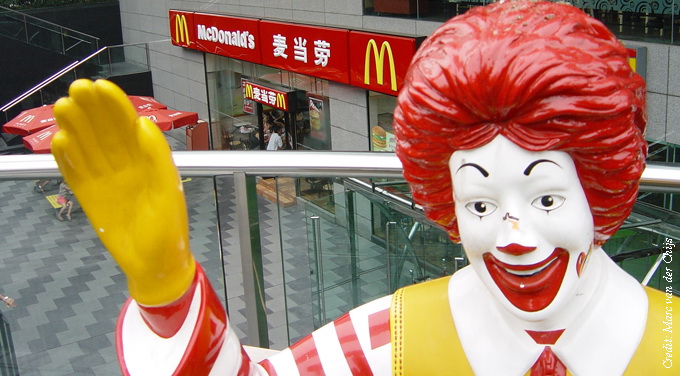 China’s expanding waistlines can be used as an indicator of the frenzied penetration of fast food outlets throughout the country over the past decade.

In 1987, KFC unleashed China’s Western fast food revolution with its first store just a stone’s throw from the headquarters of the Communist Party in Beijing. Almost three decades later the brand has more than 4,400 outlets across 850 cities. McDonald’s has close to 1,700.

The remarkable growth of foreign fast food chains in China has been attributed to several factors. Principal among them is the retailers’ ability to respond to unique market conditions in this land of 1.4 billion people.

Walk into any KFC in China and you’ll see a menu offering pork burgers, shrimps and rice dishes in addition to multiple chicken-based options. Many outlets are spacious, reflecting the preference to eat in-store. Time-pressed young professionals drop in after work to grab a dinner set – a socially acceptable habit.

In recent months however Chinese consumers have given Ronald McDonald and Colonel Sanders a reason to turn their wide smiles turn into concerned frowns.

KFC parent Yum! Brands announced an estimated 13% drop in July like-for-like China store sales from a year earlier, following a 10% declines in sales year-on-year in June and a 19% drop in May. McDonald’s reported “negative” results for China for May through July. Analysts cite lingering concerns over food safety.

Late last year some KFC suppliers were entangled in a tainted poultry scandal. Then in April an avian flu crisis rocked China and saw consumers shun chicken, the main ingredient for KFC’s most popular dishes. McDonald’s has also had its fair share of problems with this issue. Chinese consumers are starting to view Western fast food brands as less healthy than local operators, according to research house Mintel.

The way foreign fast food retailers position themselves in China also poses challenges to their operations. In Western markets fast food is a convenient and cost-effective option for low-income families, especially during recessions when consumers attempt to economize. Chinese consumers still view foreign fast food joints as small luxuries, which they are willing to cut back on during times of economic uncertainty, as is now the case.

Just as the desire for a modern way of living once drew customers to the Golden Arches to enjoy a Western experience, a foreign trend of a different kind could now be luring them away.

Independent China retail analyst Paul French suggests that the pursuit of a healthier lifestyle is one of the main factors behind the declining appeal of fast food. In a country where obesity has become an alarming problem, urbanites increasingly bombarded with adverts promoting fit bodies and healthy minds are paying more attention to what goes into their mouths.

Sports and fitness participation is growing steadily, if not exponentially, as urban Chinese seek to look good in the office on weekdays and karaoke parlours on Friday nights. It’s almost impossible to walk through a shopping mall in Shanghai without being accosted by attractive salespeople promoting gym membership.

So should McDonald’s and KFC executives be concerned about their longer-term prospects in this vital market?

Not necessarily. Their companies are already well entrenched in affluent coastal cities with a presence at all major consumer locations. Brand awareness is strong and as salaries rise, workers in less developed parts of the country will replace the educated professionals who are turning to healthy pursuits to enjoy better life experience.

To get a reading on the health of McDonald’s and company in the coming few years, a quick glance at the waistlines of residents in third and fourth-tier cities should suffice.