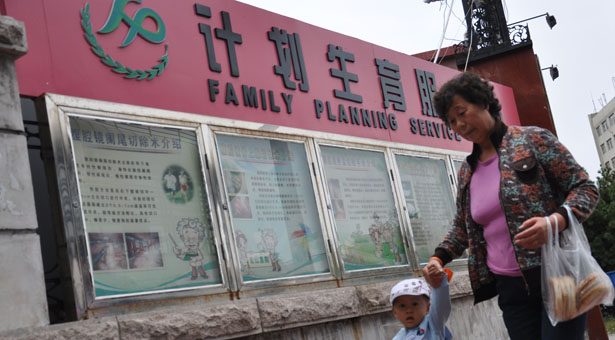 Twenty-year-old Yan Le hates holidays. A second-year biology major at a college in eastern Jiangxi Province, he has no home of his own to go to; his father died of cancer two years ago, and his mother remarried a year later. He wishes he had a sibling. Yan is just one of the many Chinese who are distressed by the one-child policy, the 30-year-old regulation that seems likely to continue for the forseeable future.

When first introducing the policy, the government reassured citizens that it would help care for Chinese seniors to offset the lost support of extra children, beginning a decade after the policy’s implementation. Ten years later, it asked people to pay for that help by contributing to pension funds. Today, the country’s pension funds are far too underfunded to take care of the now elderly population who had previously paid into the system. Only 24% of China’s seniors relied on pensions as their major source of income in 2010, according to the United Nations Population Fund.

Chinese have accepted the government’s mercurial policies thus far, but discontent is growing as the negative effects of the one-child policy – a decreasing supply of labor, an aging population and the loss of traditional values – become more conspicuous. Others argue that the policy is no longer necessary, as an economically developed China is unlikely to witness another population surge. Some even believe that China must now incentivize births to jumpstart its population growth, as Japan and Korea are doing.

After all this time, do Chinese still believe that multiple children means multiply blessings? Do they view the one-child policy as necessary or beneficial? China Economic Review interviewed people from different parts of China to appraise their attitudes.

When I was at my twenties, I planned to be a “DINK” (double income, no kids). Mostly I was worried about my children’s education. There are too many unsteady factors in Chinese society that could harm a kid as he grows up. Neither my husband nor I are Shanghainese, and I was worried about the different educational treatment for non-local children. We considered immigrating to a developed country, but that would mean starting over from the very beginning.

After much thought and pressure from my parents, my husband and I decided to have a baby. It takes a lot of time, energy and love to raise a kid; it’s not just about spending money to meet their basic needs.

If the government provides incentives such as cash subsidies, I’ll consider having another child. It’s lonely for kids who don’t have brothers or sisters. I’m an only child as well, so I know how lonely it can be for a kid. But I won’t have more than two children due to the high costs of raising kids.

As for the one-child policy, I think there is no alternative. China has too big a population, and it must be controlled in some way. Western media always denounce China’s one-child policy and human rights abuses. But if the Chinese government were to remove the policy, Western countries would be really scared when they see the surge in population, immigration and job competition from China.

Mr He Yafu, a 46-year-old independent demographer in Guangdong province

The Chinese government may slightly relax birth control policies in 2013, such as allowing a second child if one of the parents is an only child. [Currently both parents must be only children to qualify to have a second child.] I expect that it will not abolish the one-child policy altogether until around 2020, when an alarmingly high number of men will be without wives and the average population age reaches a certain level.

The one-child policy was wrong from the very start. When China implemented the policy in 1980, its fertility rate was 2.24 births per woman, not much above the replacement rate. Now, the average birth rate in China has fallen to a worryingly low level of 1.7-1.85 children on average, below an average replacement fertility rate of 2.1 births per woman in most industrialized countries.

We should maintain the one-child policy; otherwise, there will be too many people. I heard that a lot of people in provinces like Sichuan and Guizhou have three or four children. In my village, most people will only have two children, provided one is a boy. I wanted a girl, but I had my second son in September last year. My older brother had a third child, a boy, after having had two daughters. My nephew had a boy first and a girl later.

The government has become less stringent on collecting fines and enforcing sterilization over the years, but it still has its ways. They used to come to your home and take away your valuables such as furniture, but now they just stop you from starting to collect social security – if you haven’t already got it, that is. The fine has increased steadily. My brother was fined somewhere between RMB 7,000 (US$1,124) and RMB 10,000 (US$1,606) for his son five years ago. My wife and I had to pay RMB 25,000 (US$4,015) and get sterilized to obtain household registration for our second boy.

If there is only one child in the family, he will be too lonely and have no one to play with or get support from. Also, when he gets married, if his wife doesn’t have siblings either, he will have to take care of four parents. That is too much pressure.

Owen Cui, a 27-year-old Shandong native who works at a market research company in Shanghai

If I get married I might consider having a child in two years. I will make sure it’s an auspicious year in the Chinese lunar calendar. My parents urgently want me to get married and settle down, but personally I am not too worried about it. My parent’s generation raised kids in a “free-range” style. They didn’t have to attend any classes on weekends, and everyone started at the same level. My generation has to provide kids with the best living conditions, be able to afford their extracurricular activities and pay careful attention to what they eat and wear. That’s a lot of pressure.

I want to plan carefully for when I have children. My economic status is my biggest concern. Raising a child can be expensive and I wouldn’t want to compromise my quality of life for it. Age is definitely a crucial element too.

If my finances allow, I’ll definitely have two children. Only children are too lonely, and they face an overwhelming burden to take care of both their parents. Families are much happier if a child has siblings. Still, I don’t think it’s appropriate to abruptly halt the one-child policy, since China has such a huge population. The policy had its benefits when it first came out, and its consequences gradually emerged later. I hope it can be relaxed step by step.

I have one daughter. But if I were allowed to have two children in the 1980s, I absolutely would have. Back then, our incomes and the prices of goods were both much lower. Now, I can’t imagine raising two children, especially if they are boys. I would have to worry about bu
ying houses for them when they grow up. Of course I believe the one-child policy should be abandoned, but now it’s already too late. Even if you encourage people to raise two or three children, few would be able to afford that. It requires a tremendous economic and psychological commitment to raise a child now.

The negative consequences of the one-child policy have started to influence people. China is an aging society, and one couple has to take care of parents on both sides. It is hard for the single child. When they grow old, they have no siblings or close relatives to keep them company.

People often say another problem with the policy is that “the countryside is surrounding the city.” While buying food at the wet market, I noticed that some migrant vendors have four children. That’s fairly common. They work in Shanghai and bring all of their children along. I asked them once, and they said they only need to pay fines, which they don’t mind. In comparison, local Shanghai residents have fewer children. The inconsistent implementation of the policy isn’t fair.