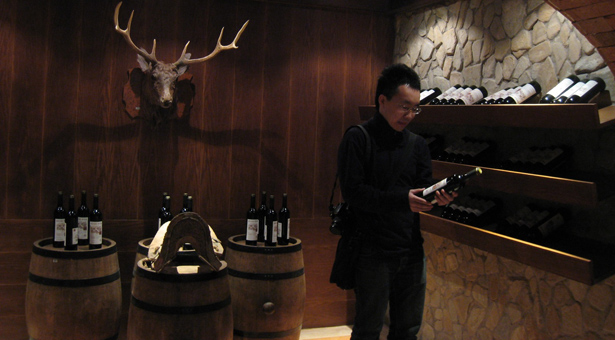 I confess to not knowing much about wine. There’s red, white and rosé, which is, I think, a bit of both. Here endeth my viticultural education. But renowned English wine expert Jancis Robinson, who’s been monitoring Chinese wines for ages, thinks Chinese plonk has arrived – and not necessarily from the traditional Chinese brands like Dynasty and Great Wall, but rather from vineyards in little-known and rarely visited Ningxia province. Robinson is plugging Changyu’s 2011 Cabernet Gernischt (aromatic nose, very Loire-like, supple and with a hint of cherry) made with grapes from Ningxia, where recent investment has greatly improved techniques. Jancis likes it so much she’s recommended that leading upmarket British grocery chain Waitrose stock it. It’s not a bad deal, and worth picking some up if you’re in the UK, considering (due to more relaxed duties over there) it’s a snip at GBP9.99 (US$16). It sells for US$18.90 in Beijing despite travelling only 550 miles rather than 5,500!

Back in the early 1990s, when I first started working with investment bankers, a Montblanc or Caran d’Ache pen was an essential item of kit. Sit down to a working lunch in any of the financial capitals of the world and, as discussion began, out would come a hefty black Swiss-made pen denoting that banking paid very well indeed. But times change; discretion and ‘stealth wealth’ are now in among European and America financiers. Now it is very uncool to pull out a Montblanc and de rigueur to be seen using a free hotel pen: self-imposed austerity, merchant banker style. But this asceticism has yet to carry over to the Middle Kingdom. Caran d’Arche has realized that probably only rich Chinese are now buying expensive pens in any significant numbers. And so, welcome the Caran d’Ache Dragon pen – black, expensive and lacquered with a swirling dragon to appeal to the only market where pen-posing still works.

Fried chicken purveyors KFC are well known in China and among MBA students doing case studies for their “localization” efforts. The latest addition to their evolving menu is meatballs. It’s a fair distance from chicken wings to meatballs, and I can’t help thinking that someone from KFC must have been shopping in IKEA one weekend and noticed the phenomenal success of the IKEA in-store restaurants. Their Beijing and Shanghai emporiums are consistently crowded with long lines of hungry shoppers at the weekends yearning for a little taste of Scandinavia. Their number one menu item? Meatballs, of course. Great idea – and now they are on every street with a KFC. That’s more than 3,000 streets now, by the way, minus the ones directly across the street from each other, of course.

The latest fake craze in Shanghai appears to Beats by Dr Dre earphones. The real thing of course is not cheap (US$179 or thereabouts) but if you like stylish-looking earpieces that thud bass into your cranium with the force of a fairly high Richter Scale reading, they’re the thing to get. Of course, Dr Dre should be outraged at this loss of revenue and blatant intellectual property infringement in China – and he probably is. But perhaps a little tricky to call the cops and complain when your mega-star rise from rapper to electronic goods designer all started with a hit song called “F**k tha Police.” Not a good way to introduce yourself to the boys in blue!

And, as always in this column, the buzzword of the moment? “The Foxconn Effect.” Everyone, it seems, is moaning about “the Foxconn Effect,” which is a phrase that I think, in all fairness, originated with Financial Times. As everyone worries about rising costs, the Foxconn wage rises in the wake of the 2010 suicides have allegedly rippled out across the manufacturing landscape, pushing wages up all around.

Finally, here’s a stat to ponder. When does China become too expensive to bother to manufacture in? According to one Shanghai-based academic I spoke with recently, the magic number is RMB5.5 to US$1. That exchange rate, combined with the rising minimum wage rates across the country and other inflating expenses (rents, land, energy, etc) is when many factory owners will decide to shut up shop and go home. We’re not too far from RMB5.5-US$1 right now. Beijing think tank West Brothers Economic Research Institute thinks it will hit RMB5.7 by 2017, albeit on the increasingly large assumption of continued 7.5% growth. Better keep watching those exchange rate calculators.