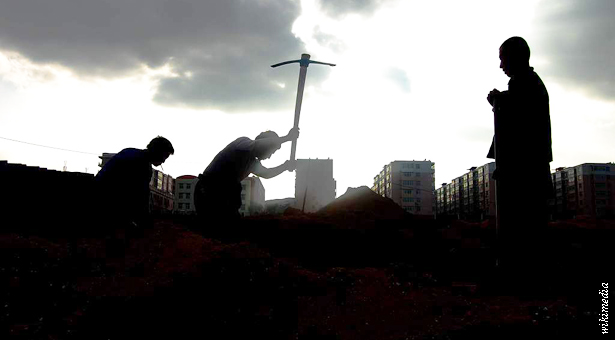 Factory owners didn’t cough up much last year in terms of salary increases for their workers.

In fact, bosses in the country’s myriad of manufacturing plants raised wages only about half as much as the year before. Salaries for China’s 163 million migrant workers grew by 11.8% in 2012, down from 21.2% in 2011, according to a report released last week by the National Bureau of Statistics (NBS).

The stats might have led to some discontent on the production floor or in China’s growing service sector. But 20% annual increases in wages was a hard trend to maintain.

The rate is returning to a more reasonable – albeit slightly lower – rate of salary growth closer to that of the past decade. Migrant workers took an average of about 13% more in wages every year between 2000 and 2007, before the rate plummeted to 5.7% at the onset of global financial crisis. The government’s 2009 stimulus in reaction to the crisis likely trickled down to workers gradually, explaining the higher increases in wages in 2010 and 2011.

An across-the-board look at wages will help take the pulse of China’s manufacturing sector. But this data is often skewed by migration itself. When workers in the countryside make the one-time jump to the city, so do their wages. This often substantial increase may have more to do with how much wages increase than any conscious decisions by factory bosses.

Perhaps more revealing were figures on migration patterns and the average age of the workers. Here, the NBS report, which focused on migrant workers, is pointing to longer-term phenomena that will define the shape of China’s workforce in the not-so-distant future.

Businesses looking for workers on China’s coast should expect to see fewer migrants from central and western China. Although wages are still higher in the east, they increased slower than in both central and western provinces last year. Migrants can also save more money by staying out of the coastal provinces where the cost of living has climbed far faster than the rest of the country.

A worker from the west – which includes everywhere from the plateaus and deserts of Tibet and Xinjiang to the jungles of Yunnan province – would save close to US$40 a month more by staying in the west as opposed to moving eastward, a significant amount on a modest migrant’s salary.

In fact, workers in central provinces such as Anhui and Hunan might consider heading west instead of settling in manufacturing centers such as the Pearl or Yangtze river deltas. Workers from central China will save about US$21 more by heading west.

It’s no surprise that the total number of migrants living in traditional production hubs fell last year while the number of workers who stayed in their home province climbed. If eastern provinces want to compete with growing inland manufacturing hubs such as the cities of Chongqing and Chengdu, they might have to pay out a bit more than they did last year.

Money won’t buy manufacturers everything, however. Although not widely reported, the NBS data also pointed to China’s aging work force, which is perhaps growing older than many had expected.

This increasingly old body of workers is yet another source of pressure on the government. Losing able-bodied workers is one factor forcing Beijing to find new growth engines that don’t rely on cheap manufacturing and export. It’s also a sign that skills and efficiency among younger laborers must be improved.

The smaller China’s work force gets, the more efficient it will need to be. The past 30 years of rapid economic growth were pulled along by China’s massive labor pool. The products were simple – often of poor quality – but China pushed out more than anyone.

When population growth starts to decline around 2025, China can no longer rely on quantity. By this time the quality of its labor, exports and growth will say far more about the country’s prosperity.