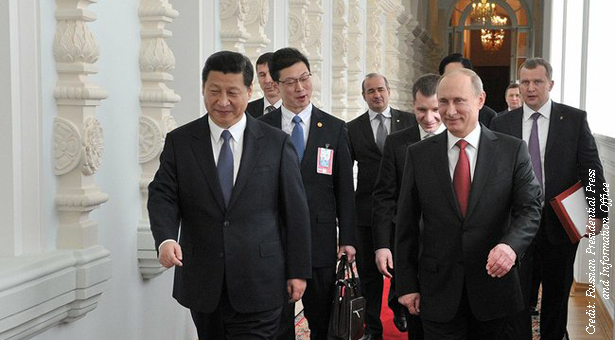 It has been more than 50 years since Xi Zhongxun, a Chinese vice premier, visited Russia. His son, China’s new president, encountered a drastically different country and relationship when he followed in his father’s footsteps over the weekend. Xi Jinping took his first trip abroad since assuming government office, arriving in Russia on Friday to meet President Vladimir Putin, Prime Minister Dmitry Medvedev and other officials in the Kremlin.

For decades, the Sino-Russian relationship was characterized by suspicion, border skirmishes and entangling alliances. After a brief period of friendship in Mao Zedong’s early years, the two countries became bitter ideological rivals, with the Russians generating much ire in Maoist China for their “revisionist” ways.

Today, relations have warmed considerably, and with good reason. Now that the US is rebalancing its resources toward Asia and strengthening its alliances with countries including Japan, South Korea, Vietnam and the Philippines, China is looking to Russia as a strategic partner to help offset US influence. North Korea’s nuclear test and harsh rhetoric in recent weeks may have given the US a motive to further increase its influence in East Asia, worrying the Chinese even more.

For Russia, continued trouble in the eurozone and increasingly antagonistic interactions with the US mean it is similarly interested in strengthening relations. The two countries have always been strong partners in defense, and this weekend saw them sign further cooperation treaties.

The two countries also signed a slew of agreements in energy. Rosneft, Russia’s biggest oil producer, agreed to triple its supply of oil to China to make the country the largest importer of Russian crude oil. Gazprom and China National Petroleum Corporation also signed an agreement for Russia to deliver 38 billion cubic meters of natural gas to China per year starting in 2018, concluding talks that have stretched for more than a decade. Cooperating on energy clearly provides great mutual benefits: China is the world’s largest energy consumer, while Russia, one of the world’s largest energy producers, has seen demand from the eurozone slow in recent years.

Finally, Russia and China share a mutual interest in working together to prevent the US from strong-arming international institutions. They both support a policy of non-interference and adopt a pragmatic worldview that rejects American-style proselytizing. They have often voted together in the UN Security Council, objecting to intervention in Iran, Syria and North Korea.

But despite these historic agreements, the Sino-Russian relationship remains somewhat uneasy. It is likely to remain that way.

Scholars and foreign policy practitioners in the two countries continue to view each other with strategic distrust. Chinese academics often attribute a “great power mentality” to Russia and warn that the country still harbors global ambitions, according to an October 2011 report by the Stockholm International Peace Research Institute. In Russia, some scholars still espouse a “China threat theory,” that Beijing’s growing power will put Russia in a comprised and vulnerable position.

This continuing distrust stems partially from geopolitics. Although the countries agreed to a common border in 2004, some Chinese textbooks still contend that Russians occupy land unfairly stolen from China. The countries have not had a border clash for more than 40 years, and an outright dispute seems unlikely. However, if China grows increasingly powerful and nationalistic, Russians could become more worried and defensive about their sparsely populated eastern border.

A more likely source of conflict, however, is competition over energy and political influence in the former Soviet Central Asia. China’s influence has expanded greatly into Russia’s backyard in the last decade.

Beijing provided the loans to build a 4,350-mile natural pipeline that ships gas from Turkmenistan through Uzbekistan and Kazakhstan to China. The line broke Russia’s monopoly on transportation networks for Central Asian energy exports, which will cost Russia greatly in reduced transit fees. Central Asia countries have also chosen to side with China over the Kremlin in the recent past, for example in 2008 when Central Asia states refused to recognize the Russian-backed separatist states of Abkhazia and South Ossetia seeking to break away from Georgia.

Another issue is the relative underdevelopment of the Sino-Russian economic relationship. According to the Stockholm International Peace Research Institute, Chinese scholars often describe the relationship as warm at the government level but economically weak. Bilateral trade has more than doubled in the last five years, reaching US$87.5 billion in 2012, but Russia’s trade with the European Union and China’s trade with the US dwarf that amount.

That strikes at the heart of the countries’ foreign relations quandry: For both Russia and China, their relationship with the US remains more important than the relationship to each other. In large part, the basis for this new relationship is exploiting each others’ problems with the West – not a strong foundation, since improving ties with the US or the EU could conceivably disrupt it.

Russia and China are undoubtedly building a stable relationship based on common economic interests. But in many ways, the two countries do not share a deeper world view or strategic interests. Thus far, the Sino-Russian relationship remains a marriage of convenience, an arrangement that can easily fall apart.