Home Business Bringing down the house 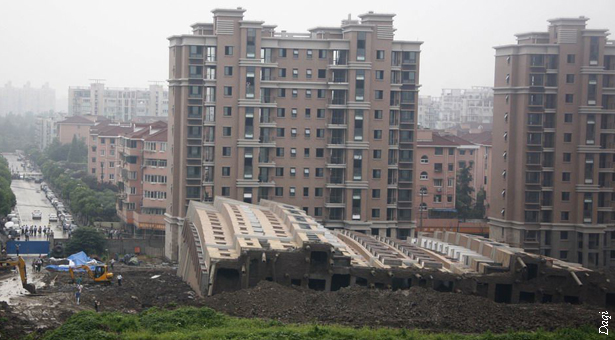 Bringing down the house

Making a house into a home is difficult. Especially when you’re a country trying to do it for the bulk of your housing stock. China has tried to curb investment purchasing to bring down prices for those buying a first home but has found that’s not so easy.

In the latest wave of measures to deter speculative buying, the central government enacted a 20% capital-gains tax on the sales of second homes on April 1. It also raised the required down payment for second homes from 60% to 70% and increased mortgage rates to from 1.1% to 1.3%, although these policies have been implemented differently across the country.

Home prices have dodged the effects of the policies thus far. Prices actually climbed the fastest in 18 months in April. They rose 5.34% higher year-on-year last month. The government has tried to stem the rise in prices with policy measures since 2009 but to little avail.

The latest policies have at least slowed property sales, much to the relief of some policymakers. The transaction volume of home sales fell 13% month-on-month in April, a sign that cooling tactics are starting to work. Early this month, Moody’s Investors Services predicted sales and prices would slow for the full year 2013. However, predictions for what the market will look like six months from now are mixed, and analysts are divided on whether or not more measures would be employed this year.

The decrease in sales is part of the intended effect, but the housing controls have missed the the government’s main target. The primary goal is to stabilize the price of houses for Chinese people buying their first home and to dissuade the speculative investment into the sector that has warped demand for years. Lower sales should eventually result in lower prices, although it will not happen instantly.

“It normally takes a while,” James Macdonald, head of research at property firm Savills China, said this week.

In fact, the recent measures have likely boosted prices in some segments of the market. Some sellers might have raised the price on the property to make up the cost of paying the 20% tax, which “may increase prices over a short period of time,” Macdonald said.

Stubbornness may also be a factor in still rising housing prices. Investors and local officials are often unwilling to budge and sell at a lower price, even if it greatly reduces their chance of selling.

Soon after the new policies were announced, property developer Soho China CEO Zhang Xin told The Wall Street Journal that they would not effectively root out China’s real estate problems.

Investors own large amounts of property and, because China has very limited taxes on housing, hold it at nearly no cost. Zhang said that without annual property taxes, investors can continue to lock up housing supply and drive prices up further.

Officials in Chinese cities also have an interest in keeping prices high. The performance and promotion prospects of local cadres is heavily influenced by the amount of funds they raise for development projects, according to a Standard Chartered report issued late last month. By keeping prices high, they make more money on land sales, a major means of raising revenue.

“The more money you raise from selling land, the more you have to spend on big infrastructure projects and the bigger the impression you make on your superiors,” the report said.

Despite the backward incentives for local cadres, some places appear to have gone further than others to enact the new policy. Unlike cooling measures in the past, local officials may have been allowed to implement the new policy according to the temperature of the local market, said Macdonald at Savills, which would account for the variance from place to place.

A varied rollout of the measures could have a positive effect because property markets within China vary greatly. Implementing controls on robust and weak markets alike could cause sales and prices to fall in some places, something the government would also like to avoid. Macdonald noted that any flexibility in the policy was unofficial.

Variations are evident a month and a half after the controls were officially enacted. Beijing was the only city to seriously implement the 20% capital-gains tax. Sales volumes of new homes still increased there, however. In Guangzhou, stronger controls on mortgages led to a reported 50% slowdown in sales.

Not only the implementation has varied but also the results of the policy given the different nature of the markets in the country, with a particularly large difference between first- and second-tier cities.

Officials in second-tier cities have had a much lighter touch, according to Johnson Hu, a property analyst at investment bank CIMB Group. Sales slowed by about 10% in second-tier cities in April, less than expected, which could actually indicate that local governments have too much leeway on implementing the policies.

“That’s a very small percentage of decline, even for the first month of policy tightening,” Hu said. “If the local governments don’t do anything, I foresee the sales volume rebounding, and that will bring up the home price in the future.”

Hu was not optimistic that the latest measures would be enough to keep increases in property price at an acceptable level, which would ideally match the rate of GDP growth. Housing is often deemed unaffordable when prices climb faster than GDP or personal disposable income. Annual GDP is rising in the single digits yet housing prices climbed by more than 40% year-on-year in the first two months of 2013.

Based on current trends, which included the launch of more real estate projects in the next few months, Hu predicts a rebound in property sales later this year, which would likely require the government to step in once again with a new set of measures.

Macdonald didn’t rule out the possibility of new property controls this year, but he said the government will be conservative in issuing further policy. While aiming to slow sales and prices, authorities do not want to overshoot and cause a major drop in the market, which would also damage the industries reliant on real estate development.

But if the more flexible policies aren’t enough to bring prices within reach of first-time home buyers, the government will need to consider harder-hitting measures. Despite the widespread resistance to an annual property tax, speculators holding large amounts of property should be forced to pay out when they horde real estate. Taxes may be the only effective deterrent to investors.

In the longer term, revising the way in which local cadre performance is assessed could also bring prices down. Raising money off land sales shouldn’t be the key element in impressing senior officials.

However prices are ultimately deflated, officials will need to set their targets low enough to make housing affordable for as many first-time buyers in the market as possible. With a growing wealth gap in China, the metrics used to determine affordability could be ineffective. GDP growth or per capita disposable income is skewed by the wealth disparity and, if used to set prices, will exclude many from the housing market.

Transition is tough. Lower sales and prices will translate into lower economic growth. More cooling measures will not make friends in Beijing, where vested interests hold large quantities of apartments and villas. But getting homes out of speculators’ hands and opening them for families should be the government’s top priority.