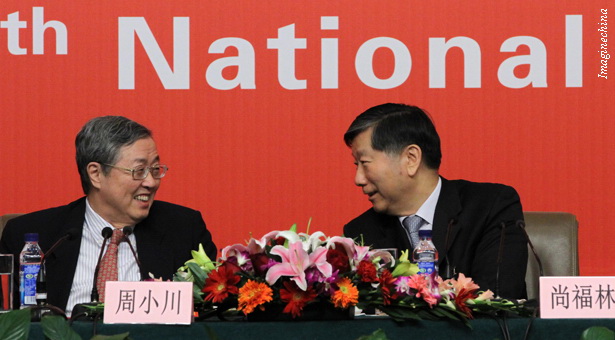 Not your average Zhou

One enduring legacy of China’s state-run system is that tens of millions of people are still subject to mandatory retirement. No matter their vigor or the need for their expertise, employees with the government and state-owned companies who reach a certain age are indiscriminately put out to pasture.

Beijing could soon make a rare exception for one of its top brass. Chinese and foreign media were aflurry in recent weeks with rumors that Zhou Xiaochuan will be allowed to retain his post as central bank governor despite having recently turned 65, the mandatory retirement age for the position.

When Zhou lost his seat on China’s Central Committee in November, analysts and media assumed he would soon depart from the People’s Bank of China as well. But sources have since intimated that Zhou may stay on for another year or two with a “national-level leader” rank that exempts him from compulsory retirement. The public will probably know Zhou’s fate by March 16, as leaders announce top government positions on March 17, just before the National People’s Congress concludes.

If Zhou retains his position as one of China’s top financial regulators, that will greatly increase the likelihood that China can smoothly reform its financial system in the next few years. China‘s pending financial makeover includes complicated reforms such as liberalizing its currency, opening its stock markets to foreign participation and switching from state-imposed to market-based interest rates.

These are necessary reforms, but they will face opposition from powerful vested interests. Zhou’s decades of experience with both reforming the system and overcoming bureaucratic inertia make him the best man for the job.

As the principle architect of financial restructuring under former Chinese Premier Zhu Rongji, Zhou has a well-deserved reputation as a reformer. Carl Walter and Frasier Howie give a fascinating account of Zhou’s work to reform the Chinese financial system in the past decade and the vested interests that he confronted in their 2011 primer on the Chinese financial system, “Red Capitalism: The Fragile Foundation of China’s Extraordinary Rise.”

Zhou moved from chairman of the China Securities Regulatory Commission (CSRC) to governor of the central bank in 2002, where he began working to pursue comprehensive reform of the financial markets. According to Walter and Howie, these reforms included cleaning up non-performing loans in the banking system, launching a national social security fund, creating bond markets with a broader investor base and opening up stock markets to meaningful foreign participation. Zhou also kicked off currency reform by presiding over the development of the floating currency exchange rate that China took on after depegging the RMB from the dollar in 2005.

Zhou learned first-hand the inertia that vested interests could impose on financial reform. These reforms encroached on the authority of powerful government agencies including the Ministry of Finance, the National Development and Reform Commission and the China Securities Regulatory Commission, and Zhou made powerful enemies as he struggled to whip China’s bureaucracy into shape.

“Suddenly, ugly personal attacks, which clearly emanated out of Beijing, were being made on Zhou Xiaochuan in the Hong Kong press,” write Howie and Walter. Then Jiang Zemin, a powerful ally of Zhou’s retired in 2005, and the State Council began to cut Zhou’s initiatives. China’s financial system was left frozen in the midst of vital reforms to interest rates, capital markets and the RMB exchange rate for nearly a decade.

“After the PBOC’s defeat in 2005, this institutional framework remained incomplete,” write Frasier and Walter. “Worse still, it has been, and continues to be, used to solve problems it was never meant to address … Lacking an integrated set of policies, the government addressed these pressures with a plethora of ad hoc institutional, administrative and other adjustments reached by consensus decision making and compromise. The result by 2010 is a jerry-built financial structure caught somewhere between its Soviet past and its presumably, but not assuredly, capitalist future.”

For one, China’s state-driven investment growth model is running out of fuel as local government debt rises, and the system needs new sources of funding. For example, high-level sources recently alleged that the country intends to finance a US$6.4 trillion urbanization program through the expansion of a corporate bond market. That would first require implementing Zhou’s market-based interest rates, which help investors to gauge and price risk.

There are strong indications that Xi Jinping, China’s new paramount leader, will take the country down a more reformist road. Xi’s symbolic Southern tour and work on market-based reforms in his previous posts in Fujian, Zhejiang and Shanghai both suggest that he will be more comfortable with Zhou’s agenda than his predecessor.

Whether Zhou’s tenure will be extended remains unclear, and most positions are subject to last-minute political jockeying. But if Zhou is allowed to remain at the central bank, his experience will undoubtedly speed China’s efforts to carry out necessary reforms to its financial system. Some things only get better with age; perhaps Chinese central bankers are one of them.